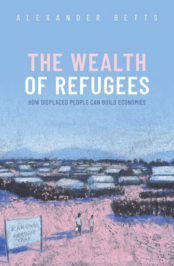 The Wealth of Refugees: How Displaced People Can Build Economies

Refugees have fallen down the political agenda since the “European refugee crisis” in 2015-16. COVID-19 has temporarily stifled refugee movements and taken the issue off the political and media radar. However, the impact of the pandemic is gradually exacerbating the drivers of mass displacement. It is eroding the capacity of refugee-hosting countries in regions like Africa and the Middle East. While the framing of 2015-16 as a “crisis” has been contested, there is grounds to believe that, without decisive action, countries within and beyond refugees’ regions of origin may once again face overwhelmingly large refugee movements.

Although rich countries have focused mainly on the health consequences of the pandemic, by far the greatest impact will be the economic consequences for the poorest countries around the world. From Sub-Saharan Africa to the Middle East, a generation of development gains will be lost. Even before COVID-19, the world faced year on year increases in refugee and displacement numbers, and the potential for a further 140 million people to be displaced by climate change. Now, three causal mechanisms suggest a possible global refugee crisis in-the-making.

First, in countries of origin, global recession will lead to increases in conflict, authoritarianism, and state fragility. Most displaced people come from chronically weak states like Syria, Yemen, Afghanistan, Iraq, and Venezuela—and we know that these are the countries likely to be worst-hit by recession. Existing social science tells us what recession does to the root causes of displacement. For example, within the literature on the economics of conflict, Ted Miguel estimates that a 5% negative economic shock leads to a 0.5% increase in conflict in Africa. We know from the political science literature that that cuts in GDP/capita are associated with less democratic politics and increased levels of state fragility. Put simply, global depression exacerbates the known drivers of refugee movements.

Second, recession undermines the willingness and ability of low and middle-income countries to host refugees. Rich countries bank on the assumption that displacement will remain contained within regions of origin. The refugee system has long been premised upon frontline countries—like Lebanon, Jordan, Turkey, Kenya, Uganda, and Bangladesh—taking in refugees. 85% of the world’s refugees are hosted in low and middle-income countries, and the majority of displaced people remain within their countries of origin as “internally displaced persons.” But the problem is that the capacity of these frontline states is being stretched to breaking point by economic crisis.

Amid COVID-19, we see states like Lebanon, which hosts 1.5 million Syrian refugees among a national population of less than 7 million, on the verge of collapse. The economic effects of COVID-19 have tipped the country to the threshold of anarchy, with the Prime Minister recently declaring that the country faces chaos. On 23 March this year, Kenya announced that it would close down its main refugee camps—Dadaab and Kakuma—potentially threatening to expel its nearly half a million refugees. It cited concerns with terrorism as the main reason, but many commentators speculated that the threat may also have been an attempt to elicit greater international assistance, at a time of economic contraction.

“the pandemic is undermining the survival strategies that refugees rely upon in camps and cities around the world, undercutting aid, remittances, and informal-sector jobs”

What we know from 2015-16 is that the rest of the world depends upon these frontline states to make refugee movements manageable. Without economically and politically viable refuge states, people are forced to move onwards—sometimes in large numbers. In 2015-16 hundreds of thousands of Syrian refugees came to Europe not only because of the war in Syria but also because Lebanon, Jordan, and Turkey struggled to host them. Millions of Syrians had been in those countries since 2011. The tipping point for onward movement came when those countries could no longer adequately protect and assist refugees. Those movements caught Europe by surprise, and the political fallout unleashed Brexit and populist nationalism across Europe.

Third, the pandemic is undermining the survival strategies that refugees rely upon in camps and cities around the world, undercutting aid, remittances, and informal-sector jobs. Bilateral donors have announced drastic cuts in development and humanitarian aid, and multilateral organisations report huge funding shortfalls. The World Bank shows how remittances, upon which refugees depend, have been cut globally by up to a fifth. And the Center for Global Development has shown how displaced people are disproportionately likely to work in the most hard-hit economic sectors. And what we know about refugees’ onward migration decisions suggests that socio-economic struggle may increase the likelihood of dangerous onward journeys to Europe and elsewhere.

The need for international cooperation

The paradox is that at a time of growing numbers and needs, rich countries are closing their doors. In the UK, for example, Home Secretary Priti Patel announced in March her New Plan for Immigration, proposing to limit the right of people to come directly to the UK and seek asylum. The UK is far from alone in both cutting overseas development aid (ODA) for refugees in low and middle-income countries and closing its borders to refugees.

If rich countries wish to avert another global refugee crisis, however, they need to work together. Governments from Europe to North America need to recognise the interdependence between their support for refugee-hosting countries like Kenya and Lebanon, and the viability of the overall international refugee system. While the political temptation to close borders and cut ODA during a recession is immense, this approach not only risks undermining people’s access to fundamental rights but also fails to serve the national interests because it risks gutting the willingness and capacity of other refugee-hosting countries around the world.

The key to avoiding another refugee crisis is international solidarity and development aid that benefits both refugees and host communities in the major refugee-hosting countries around the world. In addition to humanitarian aid, major refugee-hosting regions need investment in jobs, education, and public services. But such approaches also need to complemented by keeping the door open to spontaneous arrival asylum and organised resettlement schemes, without which, countries such as Kenya and Lebanon will rightly ask why they should continue to host hundreds of thousands of refugees at a time of national crisis.

Alexander Betts is Professor of Forced Migration and International Affairs at the University of Oxford, and author of The Wealth of Refugees: How Displaced People Can Build Economies (Oxford University Press), forthcoming April 2021. He can be followed on Twitter: @alexander_betts.