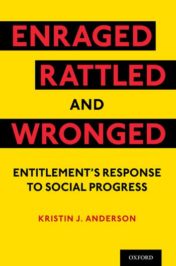 Entitled people tend to resist and resent change. For entitled white people, the latest Census data triggers panic at being replaced by those who have historically been on the margins. Whites have enjoyed being at the center of society. Politicians legislate to their needs. White people are able to move through society without being derailed or diminished by racism.

Political conservatives are both against immigration and more entitled than Democrats. And now white people, particularly those who voted for Donald Trump, see the coming demographic change as them being pushed out of the center of society and into the margins. They fear being moved into the position that immigrants and people of color have historically occupied.

From a psychological perspective, entitlement refers to one’s sense of deservingness. Entitled people believe they deserve more than others. They tend to have expectations that do not match their input, their performance, or the reality on the ground. One’s level of entitlement emerges from a variety of factors, but one’s proximity to power is a major contributor to entitlement. Those closest to power, including cultural power, are more likely to have an outsized sense of entitlement. Groups seen as the cultural default, the standard, “normal” identity in a category, have higher levels of entitlement. So, for example, men tend to feel more entitled than women.

Now pair United States demographic change with the rising income inequality of the last 30 years and you have entitled resentment. Too many white Republicans who are struggling economically avoid looking up at billionaires who benefit from an unequal system that allows them to pay virtually no taxes. Instead, they punch down at poor people and people of color whom they scapegoat even though they are not the cause of their economic struggles. Rather than seeing those who don’t share their ethnicity (but do their economy) as allies, they see them as enemies.

When your policies are not supported by the majority of voters, you foment entitled resentment in your base while preventing the majority of voters from actually voting. And thus, you have the Republican strategy for winning elections. Republicans lose if everyone votes. In 2020 Donald Trump admitted, “you’d never have a Republican elected in this country again” if voting was made easier. And so, Republicans are passing legislation to make voting more difficult. Republican strategy is to close polling locations in communities of color, restrict early voting, ban drive-thru and 24-hour voting options, prevent voting by mail (even during a pandemic), require specific kinds of identification (e.g., a gun license but not a university ID), launch modern-day poll taxes, and illegitimately removing Latinx and African Americans from voting lists.

White replacement panic will surely be the response from the contingent that gave us the “You. Will Not. Replace Us!” chant at the recently reported Census trends. The 2020 Census data are in and, as expected, the white population in the US has decreased while the number of Asian Americans and Latinx Americans has increased. Whites remain the largest racial/ethnic group, but their numbers have decreased to just under 60% of the US population. In addition, rural areas of the country with concentrated numbers of white people are shrinking. Correspondingly, counties that voted for Donald Trump are declining. For instance, Trump won 90% of the 1,600 counties that shrank in population between 2010 and 2020.

What hasn’t shrunk is Trump voters’ fear and panic at being replaced. Fear of the great replacement, as its been called by white supremacists, is a predictable outcome of white entitlement.

Entitlement is more than a psychological characteristic and its implications reach beyond the entitled individual. Entitlement produces panic in the privileged when they perceive their way of life changing.

Read the introductory chapter from Enraged, Rattled, and Wronged freely available until 31 October 2021.

Dr Kristin J. Anderson is a professor of psychology at the Center for Critical Race Studies at the University of Houston-Downtown. She earned a Ph.D. in Psychology from the University of California, Santa Cruz. Anderson's research explores subtle forms of prejudice and discrimination. She is the author of Benign Bigotry: The Psychology of Subtle Prejudice (Cambridge, 2010), Modern Misogyny: Anti-Feminism in a Post-Feminist Era (Oxford, 2015). Her newest book is Enraged, Rattled, and Wronged: Entitlement’s Response to Social Progress (Oxford, 2021).