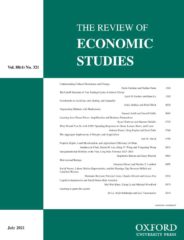 The Review of Economic Studies is essential reading for economists and has a reputation for publishing path-breaking papers in theoretical and applied economics.

In recent decades, immigration has reshaped the demographic profile of many Western countries. The economic and political effects of immigration-induced diversity have been investigated by a growing number of studies across the social sciences. Specifically within political economy, most studies have focused on the impact of immigration on the preferences and behavior of the native population (see the recent review by Alesina and Tabellini for a summary). Yet, while population inflows can have broader effects on receiving societies, including on earlier generations of migrants, such effects have remained relatively understudied. Do new groups facilitate the incorporation of existing minorities by redirecting prejudice away from the latter, or do they hinder it by fueling native-born backlash against all minorities? More broadly, how does the arrival of a new minority group affect the majority’s attitudes towards other minorities and shape boundaries across social groups?

We tested the predictions of the model in the context of US history. Between 1850 and 1915, during the Age of Mass Migration, more than 30 million European immigrants moved to the US, where the foreign-born share of the population peaked at 14%. Like today, concerns about immigrant assimilation were widespread, and nativism and anti-immigration sentiment dominated the political debate. Opposition was particularly strong against Eastern and Southern Europeans, who were religiously and culturally different from white Anglo-Saxons. Despite such antagonism, early-twentieth-century immigrants, albeit at varying rates and less quickly than originally thought, eventually assimilated economically and culturally into American society fueling the myth of the American melting pot.

We tested the idea that the migration of another group—African Americans—played a key role in the assimilation of European immigrants. While this idea has been suggested by historians, it has never been formally tested before. From 1915 to 1930, approximately 1.6 million Black people migrated for the first time from the US South to cities in the North and West. This unprecedented migration episode—termed the First Great Migration—was triggered by wartime manufacturing needs in the North during WWI, as well as declining agricultural productivity and racial discrimination in the South. To identify the effects of Black in-migration on the assimilation of Europeans, we compare immigrants across Northern cities that received different numbers of African Americans, before and after the Great Migration. To deal with the possibility that Black individuals might have sorted into more rapidly growing (or declining) cities where immigrants were assimilating at different rates, we follow the migration literature to predict Black in-migration. This strategy exploits geographic variation in historical (pre-Great Migration) settlements of Black Americans born in different Southern states and living in different non-Southern cities. It combines such settlements with differential emigration rates of African Americans across Southern states from 1910 to 1930.

Relying on the full count US Census of Population, we find that immigrants living in cities that received more Black migrants between 1910 and 1930 were more likely to become naturalized citizens—a proxy for assimilation effort—and to marry a native white spouse of native parentage—a proxy for successful integration. Reassuringly, neither naturalization rates nor intermarriage were trending differentially across Northern cities before the First Great Migration. This suggests that our findings cannot be explained by Black migrants systematically settling in cities where European immigrants were assimilating at a faster rate.

Our research also investigates the mechanisms through which Black in-migration favored the assimilation of European immigrants. Native discrimination against immigrants decreased following the arrival of Black migrants, as group boundaries were re-defined in terms of skin color rather than language or religion. Data from the historical press reveals that, in cities that received more African Americans, local newspapers were less likely to mention words reflecting fears of immigration or concerns about immigrant assimilation. Notably, the Great Migration reduced the frequency of disparaging ethnic stereotyping, such as the association of Italians with the word “mafia” or Irish with the word “violence” or “alcohol.” The drop in negative stereotyping against European immigrants was accompanied by an increase in the probability that non-Southern newspapers described African Americans using negative terms.

Consistent with our theoretical framework, assimilation exhibited an inverted U-shape. Immigrant groups that experienced the largest assimilation response were those at intermediate cultural distance (proxied using linguistic and genetic distance) from native whites. As predicted by the model, those groups were sufficiently distant to be excluded from the ingroup before the inflow of Black migrants, but close enough to benefit from the arrival of the new outgroup. Groups such as the Chinese—too distant to be recategorized as white even after the Great Migration—saw no changes in their assimilation outcomes.

Our model also predicts that assimilation effort and assimilation success should peak at different points of the distribution of immigrant distance from natives. As before, the data support this idea. Immigrants who were culturally closer to natives (e.g. Northern and Western Europeans) were more likely to successfully assimilate in response to the Great Migration, and to do so with lower effort. Such groups experienced higher intermarriage rates—an outcome heavily influenced by the preferences of native society—but lower naturalization rates—a measure less impeded by host society barriers and more reflective of immigrant effort. The pattern is reversed for “new source” immigrants, such as Eastern and Southern Europeans. These groups, which were culturally more distant from native whites, showed the largest increase in their efforts to assimilate through naturalization. However, such efforts did not necessarily translate into successful assimilation in the form of successful intermarriage.

We can rule out the possibility that social assimilation resulted from certain groups (i.e. Northern and Western Europeans) benefitting from Black inflows due to labor market complementarities, and others (i.e. Eastern and Southern Europeans) suffering due to economic competition. In contrast with effects on social outcomes, which depended on the cultural distance of different immigrant groups from native Anglo-Saxons, the economic effects of the Great Migration were homogeneous across immigrant groups: all European immigrants, regardless of their country of origin, left the “immigrant-intensive” (and low paying) manufacturing sector at similar rates. This provides additional evidence that native attitudes played a central role in driving our results.

Our results show that inflows of one group can change the salience of particular attributes, influencing ingroup members’ perceptions of previous outsiders. This, in turn, can have important implications for immigrant assimilation. Research has examined the effects of inclusive or assimilationist policies on the integration of immigrants. Our work instead suggests that, especially in multi-ethnic and multi-cultural societies, much assimilation happens organically through the interaction of new and old minority groups.

The First Great Migration in the US may have unique features. However, existing evidence suggests that the mechanisms we identified in this specific context might apply in a variety of settings. In a related study, Fouka and Tabellini document that the 1970 to 2010 Mexican immigration to the US ameliorated whites’ attitudes towards African Americans and reduced hate crimes against Black people. These patterns are consistent with immigrant origin becoming more salient relative to race, thereby improving the status of Black Americans. The framework put forward in our work highlights the multidimensional effects of immigration for social boundaries in diverse societies.

Marco Tabellini earned his PhD in Economics from the Massachusetts Institute of Technology in 2018, and spent the academic year 2018-2019 as a Postdoctoral Fellow at Harvard Business School, where he is currently an Assistant Professor. He also holds a B.S. and M.S. in Economics and Social Sciences from Bocconi University. Marco studies the political and economic effects of migration, focusing primarily, though not only, on the early twentieth century US – a setting characterized by the massive inflow of Europeans and by the first wave of the Great Migration of African Americans from the rural South to the urban North of the US. More broadly, Marco’s research seeks to understand which factors facilitate or hinder immigrant assimilation, how the presence of different ethnic groups in a society influences inter-group relations, and to what extent migration might foster the political and the social integration of under-represented segments of the population.

Vicky Fouka is an Assistant Professor of Political Science at Stanford University, an NBER Faculty Research Fellow and a Research Affiliate at CEPR. She has a PhD in Economics from Pompeu Fabra University. Her research focus is group identity and intergroup relations. She studies the conditions under which minority members identify with and are accepted by a majority and the implications of that for the design of policies and institutions. Major applications of her research are immigrant assimilation, the determinants of prejudice against ethnic and racial minorities and the long-run effects of history for intergroup relations.