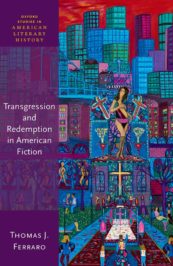 Transgression and Redemption in American Fiction

The year is 1924: the restriction acts designed to turn the tide of Eastern and Southern European immigration into a trickle have been signed into US law. Nativist panic continues apace, however, even among the upper classes, perhaps especially among the educated upper-middle classes—whose strengthened churches and preparatory schools and country clubs guard the Anglo-Protestant marriage market and the not-so-free masonry of finance capital. What is to become of America when these newcomers of swarthy complexion and strange conviction succeed as money-brokers and culture-makers and partners-in-varied-intimacies? In quick succession three titans of US literary modernism weigh in, each with the novel still judged their best: F. Scott Fitzgerald’s The Great Gatsby (1925), Willa Cather’s The Professor’s House (1926), Ernest Hemingway’s The Sun Also Rises (1926).

Consider, first, their archetypal Jews. In The Great Gatsby, gangster-gambler Meyer Wolfsheim signifies Jewish finance (a.k.a., usury) as the criminality that links the fixed betting of the East-Side underworld to the insider trading of the Oyster Bay elite, the genealogically suspect Gatsby laundering the money of whiteness. In The Professor’s House, venture entrepreneur Louie Marcellus brings Tom Outland’s theoretical physics to industrial market after marrying the fiancée of the deceased war hero—a desecration of Outland’s reputed purity in terms of both dollars and sons. And, in The Sun Also Rises, Robert Cohn’s Princeton credentialing and athletic virility allow him to crash the Anglo-American expatriate partying elite, only to be nastily dismissed for the impassioned show of taking a tryst with affianced Brett to heart—rejection-to-ejection confirming the codes and modes of in-bred whiteness.

In all three novels, what it means to be a Jew is to pose a social threat to the household economies and networked intimacies of the power elite—and the limitedness of that vision, that it is solely an issue of blood and money, may be the most anti-Semitic element of all. In outing anti-Semitism in these novels, no one has noted a simple corollary: in none of them does Jewishness seem to have anything to do with the Hebraic G-D.

Now consider, in a preliminary yet provocative way, the nearly unaddressed figuration of Catholicism in the triptych.

In The Great Gatsby, the one explicit reference to a Catholic identity is a fabrication underscoring Myrtle’s poor-white hope. But Nick’s pointed speculation on Gatsby’s background—the East Side of NY or the swamps of Lousiana?—recalls the original prologue regarding Gatsby’s youth, published separately in 1924. “Absolution” treats a priest in faith crisis, Father Schwartz, and a boy, Rudolph Miller, who is facing the onset of puberty under his father’s viciously doctrinal Irish-German Catholicism. The plot turns on foundational catechetical issues—differences between mortal and venial sin, perfect and imperfect contrition, truth of heart and veracity of speech—that escalate in the transactional dynamics of the Confessional, thrice staged. While young Rudolph decides there is “something ineffably gorgeous somewhere” that has “nothing to do with God,” the concluding death swoon of the priest witnesses, in martyred mysticism, just exactly the reverse. The reader, so tutored, pronounces an interpretive conundrum: when it comes to your future as Jay Gatsby, where have you gone, Rudy Miller?

The Professor’s House appears to be a perfect display of Leslie Fiedler’s mythography of male homosocial bonding, one (Tom for Roddy) nestled inside another (Professor for Tom), the first big-brotherly, the second classically pederastic, both subject to idealizations of memory and both seemingly as pure as the water of mesa and lake. Yet it is the Professor himself who bewails the lost “magnificence” of the discourse of sin. His real-life fairy godmother is a devout German Catholic by the name of Augusta (Augustine, in Marian female form), who not only teaches him doctrine but rescues him from the ultimate trespass against God’s gift of human life. The Professor’s name is even “Godfrey St. Peter,” an oxymoronic gesture simultaneously to a will to atheism (God-free; get it?) and to the persistence of missionary practice in the contemporary Americas—less Pauline in its sexual ethos yet devoutly responsible to others, in the manner of his Quebecois ancestors. Another interpretive dilemma: what does the Professor’s understanding of the seven deadly sins (three of which remain “perpetually enthralling”) have to do with the events of the novel?

Third, it could be merely a curious conceit of Hemingway—that narrator Jake Barnes, our quintessential love-struck yet impotent stoic—is a lapsed Catholic, if it weren’t for many such insinuations. The novel is staged as an anti-capitalist pilgrimage along the historical route of St. James, with Jake ducking into churches for intercessory prayer and encountering earnest pilgrims along the way. The famous bullfights are pagan preservations within the devout festival of San Fermín—where the Parisian Jansenist arithmetic of monetary exchange yields to peasant Marian communions of bread and wine, body and blood. In the denouement, when Brett cougars matador Pedro Romero, she does so in full reliance upon her very special pimp-and-rescue relationship to bewitched yet eyes-wide-open Jake. For Jake, the radiant, always-desired yet ever-desiring Lady Brett is the end-all and be-all despite her endless repudiation by critics—who take her either as The Whore of misogynistic projection or simply a ruthless nymphomaniac. The reader puzzles meanwhile: what does Catholicism have to do with that?

Cohort biography alerts us to three-way convergence. “Papa” Hemingway, that icon of hearty secular manhood, had the most anti-Catholic and puritanically Calvinist upbringing unto adulthood imaginable in post-Victorian America, yet he periodically claimed conversion to the Roman Church, remarrying into it as well. By the time Cather wrote The Professor’s House, she had in fact converted from her Southern Baptist raising to a lesbian-hospitable Episcopalian Catholicism and would soon write her own extraordinary mission tale, Death Comes for the Archbishop (1927). Fitzgerald of course was raised in an observant household and educated in Jesuit prep school, then fiercely mentored through adulthood by a flamboyant and erudite priest, of the order seen in Cather’s and Hemingway’s novels, too. All three thought in doctrinal terms and practiced vernacular—not always catechetical!—devotions.

In 1925, Protestant America feared for the future of America as no-longer strictly Protestant, not quite white or Anglo-Saxon. Its anxiety was manifested in closing economic and marital ranks against Catholics and, especially, Jews—the very nativism that Hemingway, Cather, and Fitzgerald dramatized and, to varying extents, ironized, in storied couplings. But there is another dimension, arguably a larger dimension, to the story of how mid-20s ethnocentrism played out in our iconic novels—which has long escaped us, in part because the Lit-Crit establishment is still loath to give American Catholicism its transfigurative due. What I wonder is whether the Catholic signs and personae dogging all three novels are matters not only of class and race but also of sex, violence, and sanctity—theologically comprehended whilst vernacularly (re)imagined. For are not all three novels, which have been disdained since the 1970s as “melodramas of beset sexuality,” even better characterized as martyr tales of forbidden love, and thereby mystery plays in something akin to an American Counter-Reformation, gorgeous unto themselves and possibly tempting even Jews? Afterall, as the Hollywood moguls have liked to quip ever since the mid-twenties, “we are Jews selling Catholic stories to Protestants.”

Featured image from the cover of Transgression and Redemption in American Fiction by Thomas J. Ferraro.

Thomas J. Ferraro is Professor of English at Duke University. He writes on literature, film, and the performing arts, and is the author of Feeling Italian: The Art of Ethnicity in America, Ethnic Passages: Literary Immigrants in 20th-Century America, the editor of Catholic Lives, Contemporary America, and a contributor to The Columbia History of the American Novel, Scribner's Encyclopedia of American Cultural and Intellectual History, and The Oxford Encyclopedia of American Literature.

Ferraro is the author of Transgression and Redemption in American Fiction (Oxford 2021), published as part of Oxford Studies in American Literary History.