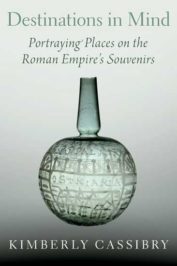 Destinations in Mind: Portraying Places on the Roman Empire's Souvenirs

As Europe reopens, consider a Roman road trip that takes inspiration from an ancient travel guide. The Vicarello itineraries describe what we might call the scenic route from Cádiz to Rome. Glimpses of the empire’s superlative architecture can be found along the way, and emerging digital tools can put primary sources at your fingertips.

Use your preferred mapping tool to navigate the modern highway and let ORBIS plot a parallel journey along Roman roads. ORBIS, meaning “world” in Latin, is a geospatial model of the Roman transit system. Just enter your origin and destination and choose your season of travel. You can even compare modes of transit in terms of time and cost, in case you are wondering how your ancient counterpart would have fared by foot or by carriage. The trick to using ORBIS is knowing what Romans called the places you want to visit, and to that question Pleiades provides answers. Named for the mythical constellation, Pleiades is an online atlas of ancient Mediterranean places. Just type the ancient placename in a general search or the modern placename in an advanced search, and the resulting entry will tell you how the name has changed over time: the city we call Cádiz, for instance, the Romans called “Gades.” Pleiades entries also link related resources, such as Topostext, which will tell you what your favorite Roman author had to say about your destination.

With a dazzling seaside setting, Cádiz (Gades) is a delightful place to begin a journey. Founded by Phoenicians, the city was one of the oldest in the Roman realm. The site’s multi-cultural history can be traced in person at the Museo de Cádiz and from afar via Google Arts and Culture. Don’t miss the Phoenician gold, the statues of Roman emperors, or the ancient graffito of a lighthouse. Little from antiquity survives around town, aside from the impressive theater. This was one of the earliest in Roman Spain and had as its patron Lucius Cornelius Balbus the Elder, who rose to the office of consul during the Roman Republic. Follow his potential path to Rome and witness imperial transformations. Seville (Hispalis) has one of Spain’s largest archaeological museums. At Córdoba (Corduba), the theater is preserved in the archaeological museum’s basement, and tombs and a temple can still be seen in the cityscape. Further afield is Tarragona (Tarraco), with a circus and amphitheater overlooking the sea, and another of Spain’s fantastic museums.

On the other side of the Pyrenees, Nîmes (Nemausus) beckons. Recent cleaning campaigns have restored sparkle to the amphitheater and the influential temple known as the Maison Carrée. The surviving Roman gates called the Porte d’Auguste and the Porte de France highlight the boundaries of the ancient city within the modern one. The recently unveiled Musée de la Romanité has glass walls, an undulating design intended to resemble a toga, and great views of the amphitheater. Collection highlights include rare statues from the era of Gallic rule, as well as spectacular Roman paintings, mosaics, and sculptures salvaged during urban construction work. Just beyond Nîmes is the breathtaking aqueduct known as the Pont du Gard. Nearby sites also lie on the Vicarello route. Arles (Arelate) has an amphitheater, a theater, and an excellent museum. Glanum is a mini-Pompeii nestled in the Alpilles foothills.

Beyond the Alps, the Vicarello itineraries take you through Susa (Segusio), Turin (Augusta Taurinorum), and Bologna (Bononia), before reaching Rimini (Ariminum) on Italy’s Adriatic coast. Excellent signage here highlights the Roman remains, including a gateway, a fragmentary amphitheater, an elegant bridge commissioned by the emperors Augustus and Tiberius, and an arch monument dedicated by the Senate and Roman People (SPQR) to Augustus for repairing the Via Flaminia. Beautiful mosaics can be seen at the recently excavated House of the Surgeon, while other striking finds from the city are displayed at the nearby museum.

Depart Rimini via the arch for Augustus, and let the Via Flaminia take you to Rome. Start at the Crypta Balbi, part of a theater complex constructed by Lucius Cornelius Balbus the Younger from Cádiz. Then walk to the nearby Pantheon, constructed by the emperors Trajan and Hadrian (both from Italica, a suburb of Seville). The Pantheon’s many adjacent cafés offer ideal settings for reminiscing. Did you prefer the design of the Pantheon or the Maison Carrée? Was the sea more beautiful at Cádiz or Rimini? With these sites in mind, conclude with a visit to the Museo Nazionale Romano di Palazzo Massimo, where the four silver cups engraved with the Vicarello itineraries are displayed in the basement. With gallery openings here and elsewhere still subject to pandemic protocols, be sure to inquire ahead. If you need to plan a return trip, remember that the Roman Empire is always best viewed from the road.

Kimberly Cassibry is Associate Professor of Art at Wellesley College.