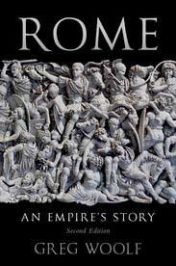 Romans sometimes worried that you couldn’t tell enslaved and free people apart. Seneca told a story that the senators once debated requiring all slaves to wear a particular costume, until they realised it would show the slaves how many of them there were in Rome. Pliny described an embarrassing encounter in the baths when a senator—naked, of course—was mistaken for a slave. These are the characteristic paranoias of slave-owners. It was no easier to tell Romans apart from their provincial subjects. By the second century CE, many senators were descended from Gauls and Iberians, Carthaginians, Greeks, and Syrians—the very peoples Romans had conquered as they extended their empire. Many more were descended from the Italian peoples defeated even earlier. A few senators were even said to be descended from slaves—but who could tell?

So, was the Roman empire unusually inclusive? Or even a multi-cultural and multi-ethnic civilization? None of that seems very likely. A people that celebrated their divinely approved rule over the world, that awarded triumphs to generals if they had killed enough enemies, that examined slaves under judicial torture and condemned criminals to death in the arena or the mines, are an unlikely role model. Most historians believe Rome ruled through fear instilled by spectacular displays of violence, as when the escaped gladiators who had followed Spartacus were crucified along the Appian Way, the main route into the city of Rome from the south. Roman politics was bloody, and not just during the civil wars of the Republic. As the Dutch Historian Fik Meijer put it in the title of his book: Emperors don’t die in bed.

It used to be thought that there were almost no people of colour in the ancient world. (Some very unsavoury political groups today still insist that the Greeks and Romans were uniquely white.) But look more closely at classical art, at Greek and Latin literature, and even at the evidence of ancient DNA and stable isotope analysis of skeletal remains, and it is immediately clear that the 60 million-odd inhabitants of the empire certainly did not look alike. This is no surprise when we consider that the Mediterranean Sea is the meeting place of three continents, that there were ancient routes into Africa across the Sahara and down the Nile, that the frontiers to the north were easily crossed, and that in the east Rome connected easily to Persia and central Asia and to the Indian Ocean too. Physiologically, the peoples that Rome conquered were already diverse. Plus, under the emperors, tens of thousands of enslaved people were brought into the empire every year, mostly from northern Europe and sub-Saharan Africa.

Romans did have their own ideas of race: their greatest poet Vergil once called his people “the toga-ed race,” the people who wear a toga. Roman poets and orators constantly ridiculed the strangeness of other peoples, picking out what they wore (Gauls in trousers for heaven’s sake!), or ate (too many things if they were Egyptians, too few if they were Jews), who they had sex with and how, their accents and body language, and so on. Those senators of provincial or servile origin had to learn the “proper” way to behave and speak, at least in public and in Rome. But these attacks did not single out skin colour, nor the kind of hair people had, nor the shape of their features, nor their height, nor any of the other physiological signs that mean so much (too much) to us.

Greeks and Romans knew about that kind of difference of course. Scientific writers wondered if Ethiopians had darker skin because they lived closer to the arid zones of the world. But that did not make them less human in their eyes. On the contrary, the Ethiopians, and their more imaginary northern counterparts the Hyperboreans, were actually treated with some awe in classical texts. Homer’s Iliad begins with the gods dining as the guests of the Ethiopians, and their king, Memnon, was one of the Trojans’ most powerful allies.

There are not many historical societies that we would consider egalitarian. Rome is certainly not one of them. The case of Rome shows how arbitrary are the differences on which racist regimes are founded. Prejudice, cruelty, and discrimination were all central to Roman rule, but what we consider the most obvious markers of race hardly mattered to them. And if their definition of difference seems arbitrary to us, perhaps we should think again about our own.

Greg Woolf is the Ronald J. Mellor Chair in Ancient History at the University of California, Los Angeles, and the author of The Life and Death of Ancient Cities, Tales of the Barbarians, and Et Tu, Brute?.