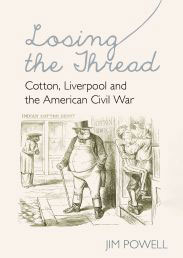 One hundred and sixty years ago, on 12 April 1861, the Confederacy attacked Fort Sumter, a Union fort in Charleston harbour. The first shots of the Civil War had been fired.

British attitudes to that war baffled both participants at the time, and perhaps still do. Many considerations, often conflicting, fed into the perceptions of individuals and groups in Britain, making their attitudes to both the war and their own self-interest in it, which were not necessarily the same thing, complicated and sometimes contradictory.

Many people in Britain were passionate supporters of one side or the other. However, many others—and perhaps a majority—felt a strong distaste for both sides. In the case of the South, the overwhelming reason for this can be stated in one word: slavery. Britain had abolished slavery in most of its own colonies in 1834 and, in the intervening thirty years or so, had become a strongly abolitionist nation. Even many of the Southern partisans in Britain refused to endorse slavery.

Despite knowing this, Confederate leaders managed to convince themselves that Britain’s need for raw cotton would lead it to recognise Southern independence and intervene to break the Union blockade of the cotton ports. “Why, sir,” said a fellow diner to William Howard Russell of The Times at Charleston in April 1861, “we have only to shut off your supply of cotton for a few weeks and we can create a revolution in Great Britain. … No sir, we know that England must recognize us.” After the war, Jefferson Davis’s widow wrote that her husband had regarded foreign recognition as an assumed fact.

Without this assumption, it is possible that secession and the Civil War would never have happened. It was a disastrous misjudgement by the Confederacy, which simultaneously underestimated the depth of the British loathing for slavery and overestimated the reliance of the British economy on the cotton trade.

“implacable hostility in Britain towards slavery, and towards the South, did not translate immediately into widespread support for the North”

Yet this implacable hostility in Britain towards slavery, and towards the South, did not translate immediately into widespread support for the North. Here, the reasons were a great deal more varied and complicated. The starting point is to understand that, before the Civil War, Britain and America had not been allies or political friends, despite many close personal links between the two countries.

It was, after all, less than 50 years since the British army had set fire to the White House and the Capitol—not a long time in the national memory. In the decade before the Civil War, Britain and America could have gone to war on several occasions. In particular, Britain was angered by America’s attempt to gain an advantage at Britain’s expense over the Crimean War, fought only a few years earlier. The two nations were fast becoming rivals, certainly in the economic sphere and increasingly in the political sphere too. Neither did the British Establishment take kindly to the republican and anti-monarchist ethos of America, especially at a time when a revolutionary threat in Europe bubbled close to the surface.

So, when the Civil War started, there was little existing bedrock of friendship between the governments in London and Washington.

The North made a calamitous start to the war as far as obtaining British sympathy was concerned. It denied that slavery had anything to do with the conflict. Many in Britain shared the sentiment of Giuseppe Garibaldi that, if the war was not about slavery, it was merely an “intestine war” over territory and sovereignty, “like any civil war in which the world at large could have little interest or sympathy”.

Then the North enacted the Morrill tariff, a protectionist measure that substantially raised the duties on British imports. This alarmed even Northern supporters in Britain, almost all of whom were fervent supporters of free trade. The Union had a press, especially in New York, that was vitriolically anti-British. It had a Secretary of State, William Seward, who was hostile to Britain, and who was also suspected (with good reason) of having designs on Canada. The North suspended habeas corpus and introduced restrictions on civil liberties, which in Britain were evidence of a tyranny.

“though Britain’s lack of sympathy infuriated the North, it was the South that needed Britain’s outright support, while the North needed only her abstention”

On top of all this, in November 1861, a Federal naval captain, acting on his own initiative, intercepted the British mail packet SS Trent and removed two Confederate diplomats. Feverish support for this action in America, and outraged opposition to it in Britain, nearly led to war between the two countries.

With all this in mind, it is perhaps not surprising that many in Britain found themselves unwilling to support the North, whilst being unable to support the South. Both sides in America were aggrieved by this fact, and largely uncomprehending of it. But, much though Britain’s lack of sympathy infuriated the North, it was the South that needed Britain’s outright support, while the North—although it also wanted it—needed only her abstention. In that respect, the British response to the Civil War was more to the North’s benefit.

In time, attitudes in Britain towards the North softened, due principally to President Lincoln’s Emancipation Proclamation. The ending of slavery had now become a war aim. The South’s last chance of obtaining British recognition had gone forever.

Jim Powell is a British novelist and Honorary Research Associate in the Department of History at the University of Liverpool. He is the author of Losing the Thread: Cotton, Liverpool and the American Civil War. Twitter: @JIMandKAYPowell