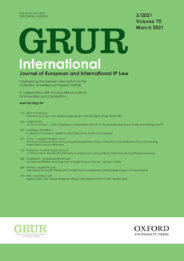 Artificial intelligence (AI) has started to unleash a new industrial revolution. It represents a significant technology advantage which already impacts today’s products and services and will drive tomorrow’s industries. Its key importance to the technological progress of future societies is beyond doubt and is reflected by a boom in patent applications on AI technology since 2013 in various industry sectors.

From a legal perspective, the patent system is the core mechanism to foster innovation. The prospect of a patent is supposed to induce innovative behaviour. However, the founders of intellectual property (IP) law never considered that a machine could one day autonomously come up with a new, useful, and non-obvious idea. Historically, the patent system has been built on a paradigm of human inventorship.

Just recently, various courts and patent offices confirmed that a machine cannot be the inventor of a patentable invention. The decisions concerned a machine called DABUS. Allegedly, this AI system had autonomously generated two inventions: an innovative food container as well as useful devices and methods for attracting enhanced attention. The patent offices refused the patent applications on formal grounds since only a human can be designated as inventor by the applicant.

The legal status quo has been subject of intensive and controversial discussions. In its DABUS decision, the UK’s Intellectual Property Office (UKIPO) criticized that AI systems are currently “shoehorned arbitrarily into existing legislation.” Moreover, in its resolution on intellectual property rights for the development of AI technologies, the European Parliament takes the view that “technical creations generated by AI technology must be protected under the IPR legal framework in order to encourage investment.”

Many experts are reluctant to recognize AI systems as inventors and contest the capacity of AI systems to invent. From the legal side, they share the view that the patent system is supposed to reward humans for inventive endeavours. Hence, the acknowledgment of artificial inventors would change the foundations of the current system. Moreover, many authors and institutions assume that accepting AI as a potential inventor necessarily leads to conferring legal capacity on AI. This would be a major step interfering with general concepts of civil law in most jurisdictions. In order to protect the claimed-subject matter, a majority of practitioners and scholars advance the idea of simply designating as inventor the user of the AI system which generated the invention. Certainly, the main advantage of this pragmatic approach is that it would circumvent the need to amend the existing patents laws.

However, such an approach entails improper consequences: by being designated as inventor, the user of the AI system would be automatically entitled to moral inventor rights, although he or she might not have been involved in the core inventive process at all. Moreover, in many jurisdictions, the designated inventor is entitled to claim compensation from his or her employer if the AI system was used in the course of employment. Such a payment would be bizarre and unfair, particularly in situations where the employer financed and owns the AI system which the employee operated.

If one looks at things objectively, some of the fears associated with artificial inventors turn out to be unjustified. Allowing for the designation of AI systems as inventor will not change the foundations of the patent system. Already today, patents are not just a reward for inventive endeavours by human geniuses but an instrument to incentivize investments of big enterprises in the creation of innovation. Protecting inventions produced by AI activity will naturally lead to an increase of investments in AI technologies to generate such inventions.

Moreover, acknowledging artificial inventors will not force the legal system to confer legal capacity to AI systems: legally, although the subject matter was invented by AI, nothing prevents the patent from being owned by the user of the AI system, the same way as patent systems currently distinguish between the notion of inventor and the notion of applicant, who is granted the patent right. Very often, the latter is the employer of the inventor and has the right to the patent therefore.

“Allowing for the designation of AI systems as inventor will not change the foundations of the patent system.”

Hence, the IP community is well advised to continue the current discussions on non-human inventorship but also to raise it to a more concrete level. Merely contesting the technological capacity of current AI systems will not solve this issue. Even if the autonomous capacity remains doubtful in the majority of cases, the enhanced capabilities of AI systems will become more and more relevant in the near future.

Nevertheless, one should not argue blindfolded for the acknowledgment of artificial inventorship either. The discussion will need to take into account various rather specific drawbacks. For example, the assessment of inventorship will become more and more complex if the legal systems allow for machine inventorship, in particular if humans and AI systems co-contributed to the inventive process. Courts will need to decide on a case-by-case basis whether the AI system or the user of the machine is the inventor or whether both have to be understood as joint inventors. Another challenge to be tackled will be the inventive step (or non-obviousness) assessment. The starting point of this test in the current system is the state of the art. A patent office has to assess that the claimed invention is not obvious to a person skilled in the art in order to grant a patent. If AI systems are potential inventors, patent offices will need to take into account the knowledge and capacity of such systems in their analysis. This assessment will be more complex than determining the knowledge of a (human) person skilled in the art and will most likely require patent offices themselves to employ AI when examining those applications.

So, do we need to recognise AI inventorship? As one can see, it is not possible at the moment to answer this question with a simple yes or no. The question requires a thorough analysis and debate involving all stakeholders in the IP community (patent offices, legal practitioners, national legislators, and academia). It will need to be conducted in an open and unbiased way. The future creation of an observatory at the European Patent Office (EPO), which will bring together public and private stakeholders to discuss and debate developments in innovation and patents could serve in the future as an appropriate forum. Currently, the recent creation of an AI Task Force by the five largest patent offices in the world (EPO, Japan Patent Office (JPO), Korean Intellectual Property Office (KIPO), China National Intellectual Property Administration (CNIPA), and United States Patent and Trademark Office (USPTO), known as “IP5”) shows that patent offices have started realizing the importance of engaging in the debate.

Dr Martin Stierle, a Senior Lecturer and Researcher with the Ludwig Maximilian University of Munich and Co-Director of the Center for Intellectual Property Law, Information and Technology (CIPLITEC). Visit his website and LinkedIn profile.