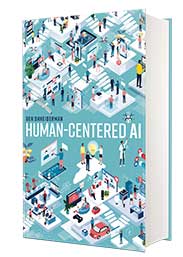 Images have long shaped thinking. Graphic designers, especially for advertising companies, are well-versed in how to convey the luxury of new cars, the strength of professional sports teams, or the attraction of tourist destinations. These images create interest, set expectations, and shape behavior.

The metaphor of thinking machines has a long history, which was reinforced by images, which adorned books, magazines, corporate advertisements, and websites. A key image, showing a human finger reaching out to touch a robot finger, is based on Michelangelo’s painting, The Creation of Adam, showing God’s finger reaching out to Adam’s finger. That image, created during 1508-1512 in the Vatican’s Sistine Chapel, inspired many artists for 500 years, leading to the familiar AI and robotic portrayal of a human finger touching a robot finger, and then variations, such as human and robot handshakes.

Other robotic images depict humanoid robots with electronic wiring and human brains with chip circuitry. These compelling images support the misguided notion that future robots will be made in the form of humans, suggesting other human-like capabilities such as two-legged mobility, five-fingered dexterity, and dominance of voice interaction. These images also suggest that computers could or should be emotional, have beliefs, and possibly be conscious.

I’ve long felt that these images were misleading, thereby slowing research on technologies that ensured human control, which would be designed to amplify, augment, empower, and enhance human performance. My expectation for the future is that computers will become supertools, such as the AI-infused cellphone camera or navigation apps, or active appliances like Google’s Nest for home control and iRobot’s Roomba for house cleaning. These innovations give people super-powers by ensuring human control, while increasing the level of automation. They boost human capabilities.

Finding alternative images that overcome the strongly entrenched robotic presence proved to be a serious challenge. Sociologist Lewis Mumford’s writings helped me to understand that the “obstacle of animism”, the belief that new technologies would be modeled on human forms, had to be overcome in images as well as in metaphors, terminology, guidelines, and prototypes. My metaphors describe AI-infused supertools, tele-bots, active appliances, control centers, but I struggled to find visual representations.

In working on the cover for my book Human-Centered AI, I developed these guidelines for what I wanted:

The challenge of finding other ways to present future technologies is still a wide open one. Fresh strategies are needed to make iconic images, compact logos, appealing animations, and compelling Hollywood films that provide helpful visions of what future technologies should do to empower people. The film Minority Report showed a wall-sized user interface that gave Tom Cruise ample room for physical sweeps and swipes across the screen. Howard Rheingold called computers “tools for thinking” in his book Mind Amplifier. Steve Jobs triggered interest when he called computers a “bicycle for the mind,” which led to appealing images in Apple ads.

“The challenge of finding other ways to present future technologies is still a wide open one.”

Bolder visions of amplified humans as superheroes with superpowers such as Marvel Comics’ Iron Man, in which wealthy inventor Tony Stark creates a magical body-covering suit that enables him to fly, fight, and save the world from evil forces. The move from comic books to action films gave special effects animators ample opportunities to explore visual representations of superpowers. Similarly, other comic book superheroes, from Superman to Wonder Woman, with superpowers showed how technology could enhance human performance. Wonder Woman, from DC Comics, was a founding member for the Justice League, which presumably was the inspiration for the Joy Buolamwini’s Algorithmic Justice League that fights against biased machine learning algorithms. Their story was told in the 2016 Netflix documentary Coded Bias.

Additionally, a team of seven authors wrote a serious technical paper titled “Superpowers as Inspiration for Visualization,” which offers delightful mind-expanding ideas. They used the Superpower Wiki as a guide to thousands of enhanced human abilities from fiction to shape their ideas of how to build superpowers into new technologies.

Due to this, my guidelines may be useful to others who seek to show how technology amplifies, augments, enhances, and empowers people, but I hope creative artists will make bold images that open our minds to new possibilities.

Ben Shneiderman is an emeritus distinguished university professor in the Department of Computer Science at the University of Maryland.

His widely used contributions include clickable highlighted weblinks, high-precision touchscreen keyboards for mobile devices, and tagging for photos. Shneiderman's information visualization innovations include dynamic query sliders for Spotfire, development of treemaps for viewing hierarchical data, novel network visualizations for NodeXL, and event sequence analysis for electronic health records. Shneiderman is also the Founding Director (1983-2000) of the Human-Computer Interaction Laboratory, and a member of the UM Institute for Advanced Computer Studies (UMIACS) at the University of Maryland. He is a Fellow of the AAAS, ACM, IEEE, NAI, and the Visualization Academy and a Member of the US National Academy of Engineering, in recognition of his pioneering contributions to human-computer interaction and information visualization.