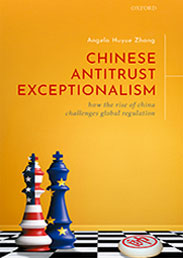 How did you become interested in the subject of Chinese antitrust enforcement?

How has antitrust enforcement changed in China over the years?

I would characterize China’s antitrust enforcement record since 2008 in three stages. The first stage, between 2008 and 2012, was a time when the Chinese antitrust agencies appeared relatively quiet as they faced a steep learning curve and were busily engaged in capacity building. The second stage, between 2013 and 2016, saw the Chinese agencies, particularly the National Development and Reform Commission (NDRC), move to the forefront by bringing large cases against high-profile targets. This period also heard many complaints from foreign multinational companies about the lack of transparency and due process violations in the Chinese regime.  The third stage started in 2017 and continues to this day. During this period, the three former Chinese antitrust authorities were merged into a single unit under a newly established ministry. The new agency has become more professional and has taken a more legal-oriented approach in handling antitrust cases. This is also a period in which the US-China relationship has gone downhill. After the Trump administration launched a trade war against China and began to apply aggressive sanctions towards Chinese companies and individuals, China responded by strategically wielding antitrust law as an economic tool to gain more leverage against the United States.

Chinese antitrust enforcement is exceptional because Chinese antitrust agencies are rarely subjected to legal challenges.  As a result, antitrust agencies have monopolized the entire process of administrative enforcement by becoming the investigator, the prosecutor, and the judge all at the same time. This, however, does not mean that these agencies can do whatever they please. As they are nested within large central ministries, they still need to comply with the formal and tacit rules of the bureaucracy. And these internal bureaucratic incentives and norms will have a significant impact in shaping antitrust enforcement outcomes.

Many Westerners think of the Chinese government as monolithic and regard all Chinese companies as being part of “China, Inc.” What’s wrong with that picture?

I believe that’s a simplistic view of the Chinese government and Chinese businesses. The Chinese State is hardly a monolith. On the contrary, a key defining feature of the Chinese bureaucracy is that power is highly fragmented. For instance, Chinese merger control is a consensus-building process involving the antitrust authority, sector regulators, industrial policy planners, and occasionally local governments. And when it comes down to the regulation of large state-owned enterprises, the interaction between the different bureaucratic players has resulted in serious disagreements. And despite the commonly held perception that all Chinese SOEs are managed under one roof, they actually belong to different levels of the government with competing and divergent interests. Since each bureaucratic department represents different interest groups and have their own agenda and mission, they all contend fiercely to expand and advance their own turf.

What role does bureaucratic rivalry play in China’s antitrust practices?

Power is fragmented within the Chinese bureaucracy, so agencies are in a constant struggle for power. Since antitrust agencies are housed within large central ministries, they view antitrust enforcement as an opportunity to expand their control over policy within their ministry’s designated scope of responsibilities.  One prime example is the NDRC, one of the three former antitrust agencies. Its predecessor was the State Planning Commission, a very powerful ministry during the days when China was centrally planned. Over the years, the NDRC, particularly its price control departments, has seen a significant reduction in power. Hence, the agency deemed the development of antitrust law as a golden opportunity to step back into the policymaking limelight. It is not surprising then, that the antitrust bureau at the NDRC prioritized its enforcement efforts in strategic sectors and daily consumer goods with the goal of stabilizing prices, and applied the same preemptive enforcement measures used in price supervision to coerce companies to lower prices. As such, the odd enforcement outcomes we observe in Chinese antitrust enforcement are actually the product of ubiquitous inter-agency competition in China.

What role does public shaming play in how China enforces antitrust orders?

Chinese government agencies are adept at using media strategies during enforcement. In several high-profile cases, the antitrust bureau at the NDRC deftly mobilized public sentiment through state media, strategically shaming firms to prevent defiance of its orders, and relentlessly suppressing experts from voicing opinions that might threaten the legitimacy of its measures. This led to significant losses of market capitalization for those publicly listed companies that were targeted, amounts which far exceeded the fines that were ultimately imposed by the antitrust authorities. Public shaming explains why firms under antitrust investigation in China quickly cede to agencies’ demands and voluntarily lower prices rather than challenge the Chinese agencies. By deploying shaming strategies, the NDRC was able to overcome its capacity and bureaucratic constraints, thereby quickly cementing its reputation as an astute and forceful regulator.

How should EU competition authorities approach the efforts of Chinese SOEs to acquire or obtain stakes in Western companies?

The European Commission has had a hard time assessing the independence of Chinese SOEs when dealing with acquisitions from China. The EU is used to applying a bright-line test in deciding whether an SOE is an independent entity, but this test does not work well when it is applied to Chinese SOEs. Although the Chinese state has voting power to influence SOEs, it may lack both the incentive and the ability to coordinate competition between them. As a consequence, the formal corporate control of the Chinese state over SOEs is a poor indicator of anticompetitive effects it might produce. Paradoxically, while this bright-line test can lead to an over-inclusion problem, it can simultaneously lead to an under-inclusion problem. The EU merger review only acts on acquisitions of controlling interests. This means that Chinese SOEs can bypass EU antitrust scrutiny by making minority acquisitions in Europe. Because there is a blurred line between SOEs and privately-owned enterprises in China, a Chinese SOE could escape antitrust scrutiny entirely by employing a non-controlling subsidiary as a vehicle to acquire European assets. As the EU’s existing antitrust regulatory framework is not fully equipped to handle Chinese investments, I urge the Commission not to deploy competition policy too broadly when reviewing Chinese SOE acquisitions. I suggest that the Commission instead seek alternative regulatory tools such as investment review to tighten their scrutiny over Chinese takeovers. This appears to be exactly the direction the EU is heading towards, especially with the recent promulgation of the White Paper targeting state-backed acquisitions.

In light of the growing US concern about its overreliance on China for essential supplies, how should the US courts handle export cartel cases involving Chinese firms?

In recent years, many Chinese exporters have been sued in the United States for conducting export cartels that have exploited the interests of US consumers. The most well-known case, involving a number of Chinese vitamin C producers reached the US Supreme Court. These Chinese exporters did not deny the allegations of price coordination but instead defended themselves on the grounds that they had been compelled by the Chinese government to do so in order to avoid potential anti-dumping charges. In a similar fashion to European regulators, US judges, including those on the Supreme Court bench, have struggled to determine the extent to which the Chinese government intervened in Chinese exports, especially when confronted with somewhat conflicting and inconsistent factual circumstances. The Chinese exporters also believed that they had been placed in a catch-22: either they compete fiercely with each other, driving prices so low that they risk violating anti-dumping trade rules, or they agree amongst themselves to raise prices and end up violating antitrust rules. Because these export cartel issues are often closely entangled with trade policy, I argue that the optimal judicial approach is to defer to the executive branch, who is in a superior position to assess US competing interests in trade and antitrust cases.

How can game theory help us understand the current tech war between the US and China?

The US executive branch has wide discretion in prosecuting foreign businesses and individuals and has strategically used such legal discretion as an instrument of trade and foreign policy against China, as we observed in cases involving Huawei and ZTE. In response, China has resorted to a tit-for-tat strategy by invoking a number of regulatory measures. In particular, the Chinese antitrust authority has flexed its muscles by holding up large mergers between foreign multinationals, amending its antitrust law to allow for high monetary fines and potential criminal liability, and threatening to impose heavy sanctions on firms that boycott or refuse to supply key components to Chinese technology companies. However, the Chinese government also faces significant economic constraints in using antitrust law as an instrument of trade policy. China continues to be heavily dependent on US investment not only as a form of capital investment, but also as a countervailing political force against aggressive US trade policy. Therefore, China will at most deploy its antitrust laws and other regulatory tools to fight a limited war with the United States, rather than as a weapon of mass retaliation.

How does your background as a Chinese-born, Western-educated scholar help you understand the conflict between Chinese and Western conceptions of antitrust enforcement?

My personal background allows me to see China from the inside, enabling me to understand the complexity of the Chinese regime. Chinese antitrust exceptionalism is deeply seated in the distinctiveness of Chinese institutions, which often reflect the weaknesses and contradictions of the Chinese regime. At the same time, my overseas experience has allowed me to look at China from the outside, which helps me better understand the frustrations and anxieties of foreign policymakers and businesses when they deal with inbound and outbound Chinese antitrust issues. In my book, I have tried my best to present a neutral, balanced, and honest view of regulatory conflicts between East and West. I sincerely hope Chinese Antitrust Exceptionalism can facilitate dialogue between the two sides in dealing with some of the thorniest regulatory issues that have beset their relationship.

Angela Huyue Zhang is Associate Professor of Law and Director of the Centre for Chinese Law at the University of Hong Kong. She previously taught at King's College London and practiced with leading international law firms in the United States, Europe and Asia.

She is the author of Chinese Antitrust Exceptionalism (OUP, 2021) .

When is a patent price ever “unfairly high”?