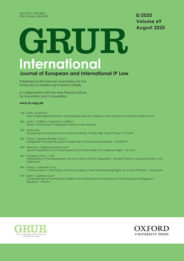 GRUR International is a monthly, peer-reviewed journal which transitions from a German to English-language publication from 2020. The journal deals scientifically with the fields of IP and Competition Law as well as the areas related to them.

The boundaries between patent and antitrust are never crystal clear. Part of the confusion comes from patent law’s historical “monopoly” roots. In early seventeenth-century England, those “letter patents” that originated from meritorious artisans’ grants in Renaissance Venice took an upsetting twist and degraded into a royal privilege to monopolize trades by those favored by the Crown. This historical entanglement left unfortunate space for confusion to grow throughout the centuries afterward. Further complicated with the fluctuating landscape change of antitrust itself, properly delineating the intersection of antitrust and patent has become a challenge faced by most competition law authorities worldwide, particularly when it comes to the current innovative economy and the necessary paradigm shift it legitimately demands.

Such challenge is no less acute in contemporary China. In fact, it is arguably more difficult because of China’s own historical complications, and the seemingly dramatic tension thus forged with a burgeoning economy today. Starting in 1978, the glorious economic reform of this young ancient country, essentially the aspired transition from a wholly controlled regime to a reasonably fledged innovative market economy, albeit with socialist characteristics, is still on its strenuous way. All kinds of obstacles need to be overcome along the way, ranging from formal restraints in laws and infrastructure, to lingering outdated theories that remain powerful impediments. On the other hand, to quickly adapt and facilitate the distinctive features of an innovative market economy, Chinese anti-monopoly (AML) authorities equally need to accomplish a static-dynamic paradigm shift. This shift would be partially addressed by an in-depth understanding of the sophisticated interplay between antitrust and intellectual property (IP).

A curious thread of this intersection tapestry is the concept of “unfairly high patent pricing” under the AML. In contrast to US antitrust but not facially dissimilar to EU competition law, the AML forbids a dominant undertaking from “abusing its market position” by selling at “unfairly high prices.” However, neither the anti-monopoly statute nor its practical guidelines gave an administrative definition to this key concept. Correspondingly, courts and AML authorities have striking discretion in characterizing a market price as “unfairly high,” potentially exposing the undertaking to harsh penalties. Two recent landmark cases with a key allegation of “unfairly high patent pricing” are the 2015 decision against Qualcomm Inc. by the National Development Reform Commission, and an ongoing investigation against Ericsson by the new authority (established in April 2018), State Administration for Market Regulation.

Section 55 of the AML arguably constitutes an IP “safe harbor,” providing that a proper exerciseof Intellectual Property Right (IPR ) shall be immune from scrutiny, while “an abuse, excluding or restricting competition” shall not. Despite the statutory framework, several recent cases have indicated a seemingly substantial departure in practice from this competition harm-focused approach, which generally use a more simplistic “benchmark comparison” methodology. This rough observation has been further supported by the newly passed agency regulation, i.e. Anti-monopoly Guidelines for IP (passed in January 2019, and published in August 2020).

Casting political economic arguments aside, one crucial reason for this departure is the lack of systematic understanding of the patent-antitrust interplay. Ambiguity lies in two aspects. One, due to the very patent mechanism in fostering innovation, even a proper exercise of right would necessarily restrict certain types of competition. Thus, it seems that an over-general standard of whether “to eliminate or restrict competition” cannot work as the ultimate test to differentiate abuse from legitimate exercise. Two, despite extensive use of “patent abuse” worldwide, the exact contour of this concept remains equally elusive. Resorting solely to the various constructions in comparative law, helpful as it is, cannot resolve these ambiguities adequately. To assess the interplay, we must not dodge the question of whether an act, such as the alleged “unfairly high patent pricing,” falls outside the scope authorized by Chinese patent law, in that it not only restricts competition, but also in a way that departed from what patent law has contemplated.

In a nutshell, the patent regime promotes innovation essentially through the instigation of dynamic competition. Specifically, it (1) bridges an innovator’s R&D to market demands: the better aligned a new technology to consumer needs, the more valuable this “shell” of right would become in the marketplace, thereby resulting in higher profit an innovator can harvest by excluding imitating competitors (competition by imitation, or CBI); (2) by restricting CBI with reasonably tailored claims, patent law simultaneously induces social resources into “inventing around” activities, i.e. to provide better/cheaper substituting technologies, thereby encouraging competition by substitution (CBS). In certain circumstances, the fruits of such CBS may also be protectable with new property right, such as the case of blocking patents, which would likely reduce the earlier patentee’s market power against the competitor; and (3) feeling pressure of CBS, the earlier innovator would likely be incentivized to continue her further “inventing around,” striving to stay a winner in the marketplace. In this way, a virtuous circle of dynamic competition may come into force.

Notably, a critical link of this circle pivots on the CBS precisely through the restriction upon CBI. This recognition has important implications in practice. For example, if an alleged patent price merely caused restriction on CBI as indicated in a supra-competitive profit, the AML must refrain from intervening. Instead, the focus should be on whether the questioned act restricts upon the CBS. A showcase of the CBS foreclosure is the historical deadlock between the famous Marconi diode and the Lee De Forest triode patent during early development of radio technology. The radical improvement as represented by the triode invention, even though literally infringing on the pioneer Marconi patent, is exactly the type of “creative destruction” Joseph Schumpeter once emphasized that boosts innovation.

Despite much sophisticated discussion of such theoretical worry however, decades of empirical research have showed insubstantial success in proving CBS foreclosure caused by “excessive” patent pricing in marketplace. A concurrent example for this disintegration is the robust innovation of the standard essential patent intensive industries, in the shadow of persistent “royalty stacking” prediction. An informed speculation is that precisely because the CBS link is pivoted by patent regime instigating dynamic competition, throughout ages the law has developed an implicit awareness, as well as multiple policy levers to safeguard the CBS from being lightly disrupted.

Judge Easterbrook once noted that antitrust is costly and the cost comes largely from judicial ignorance of business practices. In China today such ignorance is even intensified by policy makers’ divergent understandings of the government’s role in a market economy, as embodied in the 2016 Lin Yifu-Zhang Weiying Debate that drew an audience worldwide. Considering our meager knowledge of dynamic efficiency and innovation, as well as the low likelihood of dynamic competition suppression by high patent pricing in existing empirical research, it would be wise for the AML authorities to refrain from calling a patent pricing “unfairly high”, until the plaintiff proves otherwise with real evidence rather than theoretical conjectures.

Dr Yuan Hao is a Senior Fellow of the University of California at Berkeley School of Law. Over the last decade Dr. Hao has practiced in intellectual property litigation, taught patent and antitrust classes at Tsinghua University Law School, and advised Chinese government on several major legislative and judicial interpretation projects. Dr. Hao has a Ph.D. in physics, and worked seven years in the nanotechnology facility at the innovation park of Penn State University before her legal career. Dr. Hao currently provides counseling advice in the field of standard essential patents (“SEPs”), and also serves as an arbitrator of the International Arbitration Centre at Tokyo (“IACT”), which specializes in international dispute resolution regarding SEPs.