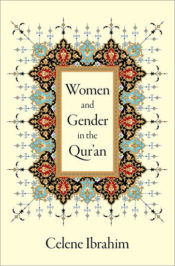 Women and Gender in the Qur'an

A mention of the infant Jesus’s birth would likely not, for most Muslims, conjure up manger scenes, a shining star, or visits from shepherds. Instead, a more likely image would be of Mary alone and in labor at the foot of a palm. Rather than a swaddled infant resting in the hay among manger animals, the Qur’an describes mother and child resting next to a spring. No shepherds gather to rejoice at Jesus’s birth in Qur’anic accounts. Instead, Mary is heckled for having a child out of wedlock.

For Muslims, Jesus, Son of Mary, may be regarded as a miraculous infant, a holy prophet who goes on to perform numerous miracles, but Muslim holidays do not include a celebration of the birth of Jesus. Moreover, depictions of the events surrounding the birth of Jesus in the Qur’an differ substantially from the two accounts in the canonical Gospels of Matthew and Luke. The scenes, however, bear some similarity to accounts of the infant Jesus in early Christian apocryphal sources, most notably the Protoevangelium of James (also known by scholars as the Gospel of Pseudo-Matthew).

Muslim scripture, like that of Christians, regards Mary the Mother of Jesus as having birthed a miraculous infant son without involvement from a biological father. Jesus, a Qur’anic verse explicates, bears similarity to the first human, both creations engendered by direct decree, the generative divine command “Be!” His birth is described in the Qur’an as “a sign for humanity”; elsewhere both Mary and her son are a “sign” for humankind. Just as in Christian scripture, an angelic figure appears bringing word of the conception to Mary in Muslim scripture too. Mary then protests that she cannot possibly be pregnant, exclaiming incredulously, “How shall I have a boy when no human being has touched me, nor have I been unchaste?” The messenger of God insists that the child will be a messiah, “honored in the present world and in the next and among those brought near” to God.

In the Qur’anic account, Mary’s birth pangs drive her to the trunk of a palm tree. Mary, very much in the midst of her labor, cries in agony, “Would that I had died before this and were a thing utterly forgotten!” (For someone who has undergone the pains of labor, the sentiment might be recognizable.) For a Qur’anic reciter, Mary’s words ring through Surah of Maryam, the nineteenth segment or “surah” of the Qur’an, a surah that depicts the annunciation and birth of Jesus, among other themes.

In the Qur’an, God provides Mary and her newly born son refuge in a place of stillness with a flowing stream. In the apocryphal Christian text, the Protoevangelium of James (chapter 20), the infant Jesus speaks from the bosom of his mother, commanding the date palm to bend down such that his mother and her husband may eat of its fruits. The infant Jesus also speaks in the Qur’an, but in this instance it is to defend the honor of his mother in the face of accusations that she’s had an affair. In another major difference, Joseph, spouse of Mary, is nowhere to be found in the Qur’anic account. For Muslims, a mention of “Joseph” is likely only to evoke the saga of the son of Jacob, not a spouse of Mary.

Not only does the Qur’an depict Mary birthing the miraculous Jesus, but earlier the Qur’an also describes the mother of Mary (Jesus’s grandmother) making a vow, dedicating her yet unborn child (Mary) to the service of God. She prays, “My Lord, truly I devote to You what is in my womb in consecration, so accept it from me; truly you are the Hearing, the Knowing.” The result of her vow is a blessed girl whose Lord causes her to “grow in a beautiful way,” to be in devotion to her Lord, to be “chosen” above all the world’s women, and to birth the “Word” of God, the Messiah, Jesus, Son of Mary.

Muslims may have the workings of a Christmas story in the Qur’an, but Jesus is most definitely not considered the Son of God or God in human flesh. The parallel celebration of Christmas for Muslims could be considered the mawlid, the folk festival tradition commemorating the birth of the Prophet Muhammad, customarily celebrated on the twelfth day of the fourth month of the Islamic lunar calendar, a festive occasion popularized about five centuries after the rise of Islam.

Celene Ibrahim is a faculty member in the Department of Religious Studies and Philosophy at Groton School. She has written extensively on themes related to women and gender in Muslim intellectual history and is a public voice on issues of religious pluralism. Ibrahim holds a PhD in Arabic and Islamic civilizations from Brandeis University, a master's of divinity from Harvard University, and a bachelor's degree with highest honors from Princeton University. She is the author of Women and Gender in the Qur'an.