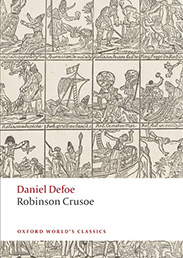 Robinson Crusoe (1719) was Daniel Defoe’s first novel and remains his most famous: a powerful narrative of isolation and endurance that’s sometimes compared to Faust, Don Quixote or Don Juan for its elemental, mythic quality. Published 300 years ago this month, the work was an immediate popular success, and as one envious rival sneered, “there is not an old Woman that can go to the Price of it, but buys thy Life and Adventures.” It took longer to gain a foothold in the literary canon, in part because of Defoe’s lasting reputation as a political incendiary who had spent several months in prison for seditious libel. But in later generations Robinson Crusoe was championed by Jean-Jacques Rousseau, Samuel Taylor Coleridge, Walter Scott and others, and its vivid combination of exotic adventure and pious introspection made it a classic for Victorian readers.

We think of Robinson Crusoe above all as a book about solitude and survival. Shipwrecked in a violent storm off the coast of South America, and the sole survivor, Defoe’s hero salvages what he can from the wreckage, and sets about reconstructing a miniature civilization on “this dismal unfortunate Island, which I call’d the Island of Despair.” It’s a slow but successful process, in which Crusoe progresses beyond the desperate foraging of his first days on the island to build a settlement where he cultivates crops, domesticates livestock, and manufactures utensils like pots and lamps. The story may have been inspired by the celebrated case of Alexander Selkirk, a Scottish mariner who survived alone for years after being marooned in the South Pacific. But when finally rescued in 1709, Selkirk had been driven half-mad by his ordeal—“a Man clothed in Goat-Skins, who look’d wilder than the first Owners of them,” his rescuer recalled—and was no longer capable of coherent speech. By contrast with Selkirk, Crusoe thrives, and his elaborately tailored goat-skins, made famous by an iconic frontispiece illustration in the first edition, are a mark of his human triumph over a hostile world.

Defoe resumed these themes of isolation and endurance in his later fiction, but explored them in different worlds. There, as much as in Robinson Crusoe, he writes novels of adverse conditions, personal hardships, and abrupt lurches into disaster, and novels in which the struggle to survive involves its characters in crises that are not only practical but also moral or spiritual. Yet Defoe was also the first great novelist of urban life, and in A Journal of the Plague Year (1722) and Moll Flanders (1722), the struggle plays out in the teeming metropolis of his own experience. H. F., the otherwise unnamed narrator of the Journal, is alone and imperiled on the plague-ridden streets, where “London might well be said to be all in Tears.” Moll Flanders defamiliarizes urban experience in a different but no less compelling way, by imagining a protagonist “without friends, without clothes, without help or helper in the world,” who comes to observe and describe the city from the viewpoint of its criminal underworld. Crime, for Defoe, was never just sin, but something to which we might all be driven, like Crusoe in his doomed ship. As he writes in an astonishing newspaper leader, destitution would make thieves of us all, and worse: “I tell you, Sir, you would not Eat your Neighbours Bread only, but your Neighbour himself, rather than Starve, and your Honesty would all Shipwrack in the Storm of Necessity.”

The language of shipwreck is a striking feature of all these novels, though one Defoe’s narrators tend to evoke during interludes of calm. “Now I seem’d landed in a safe Harbour,” says Moll at one such point. After the plague, as survivors pick up the threads of their lives, H. F. is dismayed to see “People harden’d by the Danger they had been in, like Sea-men after a Storm is over,” not reformed or penitent, but instead “more bold … in their Vices.” There was even a sense, Defoe once suggested, in which Robinson Crusoe, for all its overt exoticism, might be thought of as a novel about urban life. In Serious Reflections During the Life and Surprising Adventures of Robinson Crusoe (1720), a work that teasingly blends Defoe’s authorial identity with that of the fictional Crusoe, he now experiences, he says, “more Solitude in the Middle of the greatest Collection of Mankind in the World, I mean, at London … than ever I could say I enjoy’d in eight and twenty Years Confinement to a desolate Island.” Perhaps Robinson Crusoe was even an “Allegorick History” reflecting his own struggles and dangers in the toxic political environment of a capital city; perhaps it was no fiction at all, but “one whole Scheme of a real Life … spent in the most wandring desolate and afflicting Circumstances that ever Man went through”—a life in which he too had been “Shipwreck’d often, tho’ More by Land than by Sea.”   Like every classic, Robinson Crusoe has many layers, and one of these seemed to lie very close to home.

Thomas Keymer is Chancellor Henry N. R. Jackman University Professor of English at the University of Toronto and editor (with James Kelly) of the Oxford World’s Classics edition of Robinson Crusoe. He recently edited The Oxford History of the Novel in English, Volume One: Prose Fiction in English from the Origins of Print to 1750 (2017), and his monograph Poetics of the Pillory: English Literature and Seditious Libel 1660-1820 is forthcoming in OUP’s Clarendon Lectures in English series.