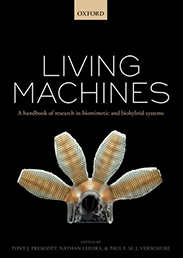 Our planet is out of balance as the result of our technologies. The Intergovernmental Panel on Climate Change warns that global temperatures could reach a frightening plus +3° by the end of the century, our ocean ecosystems risk being overwhelmed by non-degrading plastic waste, open rubbish tips scar the landscape and pollute our water supplies with the hazardous leftovers of yesterday’s technology. The race to recycle and reuse, to be more efficient and more sustainable is on, and we know the clock is ticking.

Boosting efficiency or reducing emissions by a few percent is helpful but it may not be enough. Nor is recycling a panacea for the problem of waste; the effectiveness of many recycling processes is low and can never come close to 100%. The information technologies that have transformed our 21st century civilization ravenously consume rare earth metals at unprecedented rates, some supplies will run out in the coming decades, and the computer farms we build to support the internet, artificial intelligence, and blockchain could consume up to 1/5th of global energy by 2025. The information and communications technologies that drive much of today’s industry, public services, and domestic life, from mobile phones to computers and robots, are therefore becoming as much a part of the problem of human sustainability as gas-guzzling cars and coal-fired power stations. What can we do?

There may be a path forward; we can learn from nature to create technologies that are smart, adaptive, human-compatible, but also efficient, resource neutral and that have natural cycles of growth, decay, and re-use. From the use of biological or biomimetic materials, to energy scavenging from biosources, to brain-like learning, perception and cognition using low-power massively parallel hardware, next generation technologies are taking insight from nature to create more sustainable solutions to the challenges faced by our species and our planet.

Take the brain, for example. When Google DeepMind’s AlphaGo beat grandmaster Lee Sedol in 2016 at the game of Go, the energy that AlphaGo consumed in one week was likely more than Lee Sedol had used in his entire life. Human brains are not only the most powerful “computers” we know of, but they are also the most efficient, probably by around five orders of magnitude (100,000x) compared to current supercomputers. Likewise, Sedol gained his Go mastery by playing many fewer games than AlphaGo, demonstrating one key edge that human brains still have over machines—our ability to learn efficiently from a small number of experiences—small data, if you like, rather than big data.

…the patch can be used repeatedly and for a much longer period of time, thus decreasing the potentially negative environmental impact and waste of similar products.

This sort of thing has far-reaching implications for environmental resilience. In one example, researchers have studied the adhesive traits of beetles, which show high adhesion strength even on rough or wet surfaces. Researchers have mimicked this simple trait to create a biomedical skin patch which provides strong adhesion without using wet or toxic chemicals. In this sense, the patch can be used repeatedly and for a much longer period of time, thus decreasing the potentially negative environmental impact and waste of similar products.

These are the kinds of challenges where technology has much to learn from natural solutions. However, the wider benefit is potentially more far-reaching. The chemistry of living systems is very different from the one used in our current technologies. The main elements used in living systems are carbon, hydrogen, nitrogen, oxygen, phosphorus, and sulphur—amongst the commonest elements on earth (other elements are also used but at much lower concentration—well below 1% of mass). Moreover, these main six chemical elements are involved in natural cycles: the carbon cycle, the water cycle, the sulphur cycle, the nitrogen cycle, and the phosphorus cycle that all intrinsically sustainable. “Living machine” technologies that build on principles harvested from the natural world—and ultimately, perhaps, from the same materials as living systems—could play a crucial in addressing some of humanity’s most pressing problems.

Interestingly, the development of such technologies could also see a narrowing of the gap between living systems and human-made ones, and perhaps, eventually, a rethinking of the nature of life itself.

Tony Prescott is Professor of Cognitive Robotics at the University of Sheffield, UK, and Director of Sheffield Robotics, a cross-disciplinary research institute with over one hundred and fifty researchers. His background mixes psychology, neuroethology, and brain theory with robotics and artificial intelligence, and his research aims at answering questions about human nature by creating synthetic entities with capacities such as perception, memory, emotion, and sense of self. He co-founded the International Living Machines conference series and also writes and speaks on societal and ethical issues in technology and the brain sciences.