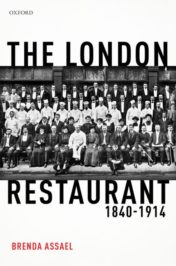 If the letters and commentary sections of national newspapers are anything to go by, the question of whether, and how much, to tip is a source of vexation for restaurant patrons in early 21st century London. There has also been more recent criticism of proprietors not passing on tips to their wait staff. These concerns were no less prevalent in the Victorian and Edwardian period, and produced an intense discussion that encompassed diners, proprietors, and waiters. Tipping in the late 19th and early 20th century restaurant is not just an esoteric curiosity. The London restaurant was a critical part of the urban fabric. We need to remember that there was an increasing need for people to eat out because of the growing distance between residence and work, and the dramatic rise in the population. The issue of service and remuneration also tells us something about how contemporaries conceived the workings of capitalism and social mobility.

Unlike today, it was generally not a convention in the 19th and early 20th century restaurant to add a service charge to a bill of fare, so tipping was often left to the discretion of the individual customer. On the question of whether to tip or not to tip, the esteemed restaurateur, Henry Roberts believed that ‘perhaps [the diner] is nervous and wonders what the waiter will think of him; but whatever it is, the waiter gets his tip all the same.’ However, there is actually very little evidence of how regularly diners honoured a commitment to leaving a gratuity, and we have even less ability to substantiate how much they might have left. Contemporary commentators suggested that tips should be substantial, but such prescriptions might indicate the ideal, rather than the realized.

Even when tips were left by diners, there was no guarantee that the money ended up in the pocket of the waiter. Many restaurants operated the so-called tronc system under which all the tips received by the entire waiting staff were pooled and then divided each week according to an agreed scale of payment, with head waiters getting more than casual ones. In practice, much could go wrong, for instance when one of the waiters acting as treasurer for staff at a restaurant in the Strand in 1897 absconded with the week’s collection. In such cases, justice was sometimes meted out in the magistrates’ court or alleyway, or both. In still other cases, the restaurateur took the lion’s share of the pot, leaving his staff out of pocket. What might make this seem particularly egregious is that in some restaurants, waiters received no salary at all, or even paid their employers for the privilege of working. The apparently stark inequities of such arrangements, however, should not be allowed to obscure the fact that some waiters were able to work the system to their advantage. This was particularly true of waiters in high-end restaurants, where tips could potentially be not inconsiderable. One observer at the Monico in Shaftesbury Avenue in 1894 claimed that, while they received no salaries and paid between 3s and 4s a day for the privilege of serving, some waiters took home between £12 and £20 a day. Albert Thomas, recalling his career as a waiter at the beginning of the twentieth century, asserted that even in the more modest establishments in which he served, he could “on a good night” take home 10s, which paid for his supper, a drink, and maybe a visit to the music hall and a cigar.

The fact that the financial rewards of waiting were not insubstantial may explain the attraction of employment in the restaurant to two important new categories of social actor in late Victorian and Edwardian London: the foreign waiter, and the waitress. London was a nodal point in a broader international labour market, in which waiters, who began their careers in Italy, Austria or Switzerland relocated to Paris, and then London, and sometimes onward to New York. In so doing, they were often able to build-up not merely an important resumê of experience, but also useful contacts, which allowed many of them to progress from waiting at tables to management, and even ultimately proprietorship of restaurants. For example, Mario Gallati began as a modest commis in his native Italy before becoming a waiter in Paris and London, and then went on to found the illustrious Caprice restaurant. Similarly, waitresses became increasingly prominent in the closing decades of the 19th century, especially in the new chain restaurants, such as J. Lyons and Co., where their presence reflected a broader shift to heterosociability in public spaces that included both customers and workers.

The potential allure and glamour of the waitress, celebrated in popular song and fiction, did not preclude episodes of resentment at employer exploitation. Even the illustrious waitresses of J. Lyons and Co., with their legendary starched uniforms and white frilled caps, resorted to strike action in 1895 when their bosses tried to halve their commissions. (The employers were forced to retract these in the face of public sympathy for the waitresses.) However, there is no doubt that women were attracted to waitressing not least because it compared favourably to alternative employment, particularly domestic service. The columns of ladies’ journals in the 1890s regularly disclosed the dudgeon of upper-middle class women who were finding that the refreshment room and tea shop were appropriating young women who would normally work in their households. Whatever its more vexing connotations, the significance of the tip in the restaurant culture of London at this time reflects a metropolitan world that was characterized by heterogeneity, internationalism, and social mobility.

Brenda Assael is Senior Fellow at the Institute of Historical Research, University of London. She was educated at Barnard College of Columbia University and the University of Toronto. Brenda is the author of The Circus and Victorian Society (2005), and has published widely on the intersections between culture, society, commerce, and politics in nineteenth-century Britain.

COVID-19 and the London restaurant: a Victorian perspective