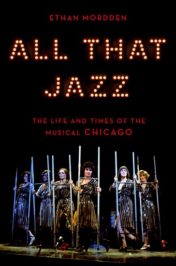 All That Jazz: The Life and Times of the Musical Chicago

Chicago is arguably one of the most famous Broadway musicals of the 20th century, if not the most famous. Based off Maurine Dallas Watkins’ satiric 1926 play, it has spawned a Tony Award-winning revival and Academy Award-winning movie version. Songs like “All That Jazz” and “Cell Block Tango” have become household tunes and were recorded as singles by jazz and pop singers alike.

So many versions of the same song can lead to contention: was Chita Rivera’s original “All That Jazz” the most varied interpretation, or does one prefer the breathiness of Renée Zellweger’s raw (if underdeveloped) take on it? How “jazzy” should the song be? (It is a show tune, after all).

We’ve curated a selection of some of the best songs from the Chicago soundtrack, including recordings from various stage productions of the musical as well as the 2002 film version. Indulge in some nostalgia for a classic Bob Fosse musical, and decide for yourself who sang “Razzle Dazzle” the best.

Celine Aenlle-Rocha is a Marketing Coordinator at Oxford University Press.