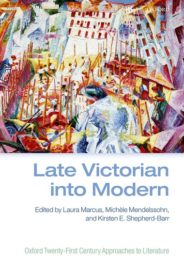 The idea that life imitates art is one of Oscar’s best yet most often misunderstood. It is central to his philosophy and to his own life. Take The Decay of Lying, for example, an essay in the form of a dialogue that he wrote in the late 1880s. What did he call the interlocutors? Why Cyril and Vyvyan, the names of his two young sons, of course. But the piece’s intellectual party really gets started when Wilde has his learned young gentlemen interview each other. Naturally, what is uppermost in their minds is the relationship between life and art. Just like their clever father, Cyril and Vyvyan are curious about how the real world and the imaginary world mirror each other.

Doublings such as these are usually a clue in Wilde that he is working through some element of autobiography. By the time he penned the essay, he was in his mid-30s, and on the verge of hitting it big. He also had a wife and family to support. He hadn’t yet written The Importance of Being Earnest or any of the mischievous society comedies that would make his name throughout the world. But he had taken a double first from Oxford, accessorized it with the Newdigate Prize for poetry, cut a dash as a London dandy and gained a reputation as a heartthrob in the United States where “Oscar Dear” became the name of one of the many songs immortalizing his charms. When he wasn’t flirting, he was lecturing Americans and Canadians about art and interior decoration, editing a feminist women’s magazine, reviewing books, and writing essays.

All the world seemed to be a stage to him, and life itself a kind of performance. And that became the subject of one of his most memorable pieces, The Decay of Lying.

“Life imitates art,” he argued, illustrating his lesson by pointing to children’s tendency to imitate what they read in books and stories. To prove his point, he turned to the phenomenon of “the silly boys who, after reading the adventures of Jack Sheppard or Dick Turpin”, 18th century criminals, wreak havoc on unsuspecting citizens “by leaping out on them in suburban lanes, with black masks and unloaded revolvers.”  Today, you still hear a version of this idea when people talk about violent video games causing tweens to lash out.

Wilde’s goal wasn’t to save the children. His real target was adults – those who pretend they aren’t influenced by art or, worse, that art doesn’t matter. That’s obviously untrue. I’ve met enough adult Harry Potter readers to know. Because of what they’ve read, they look at Oxford subfusc with a reverence that black polyester hardly deserves. Wilde thought that adults were hypocrites. They were more influenced by art but better at hiding it than kids. Growing up involves lying low.

“What is interesting about people in good society,” he wrote, “is the mask that each one of them wears, not the reality that lies behind the mask.  It is a humiliating confession, but we are all of us made out of the same stuff.” He didn’t think of himself as an exception to this rule. He told the poet Violet Fane that his essay was “meant to bewilder the masses” but was “of course serious.” The daily show in which we all star, he argued, is called being polite and it requires that adults wear a mask.

This may seem like old news now, but it was revolutionary to the Victorians. In an era when sociology was still in its infancy, psychology wasn’t yet a discipline, and theories of performativity were still a long way off, Wilde touched on a profound truth about human behaviour in social situations. The laws of etiquette governing polite society were, in fact, a mask. Tact was merely an elaborate art of impression management.

Wilde made his own life into a tragic, exquisite, grotesquely gorgeous work of art. That was his legacy to the 21st century. Nowadays Wilde’s queerness is being embraced with open arms. In 2017, he was among 50,000 gay men posthumously pardoned by the Ministry of Justice for sexual acts that are no longer illegal. Everywhere you turn these days, there seems to be another shrine to Oscar going up somewhere, whether it’s the Oscar Wilde Bar and Oscar Wilde Temple in New York, or the Irish hotels set to open in London and Edinburgh. Wilde’s works, once considered to have a corrupting influence, are now taught in schools around the globe. He has become gay history’s Christ figure. The relics of his martyrdom have become attractions, sites of pilgrimage.

On his 163rd birthday, he’s having the time of his life. The 21st century’s most curious gift of all is that his extraordinariness now passes for ordinary. It was a long time coming, but that’s one hell of a good birthday present.

Michèle Mendelssohn is a literary critic, cultural historian and the author of Making Oscar Wilde, which will be published by OUP in summer 2018. Mendelssohn is Associate Professor of English Literature at Oxford University. She earned her doctorate from Cambridge University and was a Fulbright Scholar at Harvard University. Her previous books include Henry James, Oscar Wilde, and Aesthetic Culture and two co-edited collections of literary criticism, Alan Hollinghurst and Late Victorian Into Modern (shortlisted for the 2017 Modernist Studies Association Book Prize). She has published in The New York Times, The Guardian, African American Review, Journal of American Studies, Nineteenth Century Literature, and Victorian Literature and Culture.