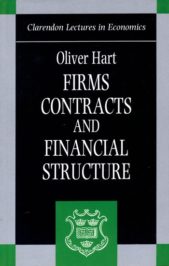 At first glance, it may seem a dizzyingly impenetrable subject matter, but Oliver Hart and Bengt Holmström’s contributions to ‘contract theory’ have revolutionized the study of economics. They have recently been awarded the 2016 Nobel Prize in Economic Sciences, with the presentation committee noting how their pioneering analysis laid the “intellectual foundation for designing policies and institutions in many areas, from bankruptcy legislation to political constitutions.” But what does this mean in practice? The Nobel committee went on to state that:

“Modern economies are held together by innumerable contracts. The new theoretical tools created by Hart and Holmström are valuable to the understanding of real-life contracts and institutions, as well as potential pitfalls in contract design…”

Essentially, Hart and Holmström have developed tools for critically thinking about some of the biggest political issues we face. For instance, Holmström has dealt with executive pay – and argued that when creating contracts there must be an adequate balance between risk and incentive. This is particularly pertinent to sectors such as banking, where companies would like to encourage innovation wherever possible, whilst avoiding any reckless behaviour. In a similar vein, Hart has focused on ‘incomplete contracts’, informing current debates concerning privatisation of state services. To give just one example, if there are no contract clauses dealing with ‘how’ services should be carried out (i.e. trains, prisons, postal services) then private companies may have too much of an incentive to cut costs, and thus lower quality to unacceptable levels.

Congratulations to both Hart and Holmström on their amazing achievement. To celebrate, we’ve compiled a collection of chapters and journal articles, either written by or about Hart and Holmström, to help you gain a better understanding of these two Nobel Laureates and their work.

‘Introduction’ in Firms, Contracts, and Financial Structure by Oliver Hart

The introduction to Oliver Hart’s classic 1995 text, in which he provides a framework for thinking about firms and other kinds of economic institutions. Hart discusses the problems creating contracts which satisfactorily deal with every single real-life eventuality, and argues that this concept, of ‘contractual incompleteness and power’ can be used to understand many economic institutions and arrangements.

Part of a book titled The Impact of Incomplete Contracts on Economics, Bengt Holmström argues that Hart’s theory (outlined above) could actually be construed as ‘a theory of markets rather than a theory of the firm.’ Holmström opens by asking what exactly is meant by a ‘firm’ – and opines that a firm should not be understood via transactions, but through its owner’s decision-making rights.

In the last ten to fifteen years, a new area has emerged in economic theory, which goes under the heading of “incomplete contracting.” This approach has been useful for understanding topics such as the meaning of ownership and the nature and financial structure of the firm. Yet almost since its inception, the theory has been under attack for its lack of rigorous foundations. In this article, Hart and Moore evaluate some of the criticisms that have been made of incomplete contracting theory, and develop a model providing a rigorous foundation for the idea that contracts are incomplete.

Hart and Moore argue that a contract provides a reference point for trading parties’ feelings of entitlement. The authors present an alternative and complementary view by developing a model in which “a party’s ex post performance depends on whether the party gets what he is entitled to relative to the outcomes permitted by the contract.” Their analysis provides a basis for long-term contracts in the absence of noncontractible investments and elucidates why “employment” contracts, which fix wages in advance and allow the employer to choose the task, can be optimal.

‘The governance of exchanges: members’ cooperatives versus outside ownership’ by Oliver Hart and John Moore in the Oxford Review of Economic Policy

“Rapid and fundamental changes in the economics of exchanges suggest that it is important to consider whether the governance structures that have evolved in the past are likely to remain appropriate for the future.” Hart and Moore argue that the crucial distinction between a cooperative structure and outside ownership concerns who has residual rights or control over the non-human assets. They believe that both forms of governance are inefficient – but for different reasons, and in different ways.

‘Managerial incentive problems: a dynamic perspective’  by  Bengt Holmström in The Review of Economic Studies

Holmström’s paper investigates the idea that career concerns induce efficient managerial behaviour, and considers the implications of reputation on managerial risk-taking. “The fundamental incongruity in preferences is between the individual’s concern for human capital returns and the firm’s concern for financial returns. The two need be only weakly related. It is shown that career motives can be beneficial as well as detrimental, depending on how well the two kinds of capital returns are aligned.”

‘The internal economics of the firm – evidence from personnel data’ by George Baker, Michael Gibbs, and Bengt Holmström in the Quarterly Journal of Economics

Through analysing 20 years of personnel data from one firm, this study aims to reveal the nature of the internal labour market and the wage policy of the firm. In doing so, Baker, Gibbs, and Holmström provide organisation theorists with a descriptive paper on the internal economics of the firm.

‘The wage policy of a firm’ by George Baker, Michael Gibbs, and Bengt Holmström in the Quarterly Journal of Economics

Baker, Gibbs, and Holmström analyse salary data from a single firm in an effort to identify the firm’s wage policy. Among their findings is evidence that employees are partly shielded against changes in external market conditions, and that promotions and wage growth are strongly related, even though promotion premiums are small relative to the large wage differences between job levels.

Also appearing in The Impact of Incomplete Contracts on Economics, Josh Lerner highlights how Hart’s theory is especially relevant to analysing strategic alliances. In it, older case-studies are considered, but it is argued that Hart’s work brings forth new issues which are not yet fully understood. This is particularly the case when looking at terms of trade among partners, and the complex relationships between contracting and the market itself.

Amelia Carruthers is a Marketing Executive with the Online Products team at Oxford University Press. The reading list was jointly selected by the Online, Books, and Journals Economics marketing teams.