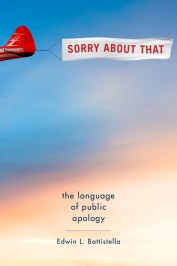 If there were an Olympics for making an apology, swimmer Ryan Lochte wouldn’t qualify. After being outed for his fake claim that he was robbed by men identifying themselves as Brazilian police officers, he took to social media for damage control. His Instragram apology on August 19 went this way:

I want to apologize for my behavior last weekend — for not being more careful and candid in how I described the events of that early morning and for my role in taking the focus away from the many athletes fulfilling their dreams of participating in the Olympics. I waited to share these thoughts until it was confirmed that the legal situation was addressed and it was clear that my teammates would be arriving home safely.

It’s traumatic to be out late with your friends in a foreign country — with a language barrier — and have a stranger point a gun at you and demand money to let you leave, but regardless of the behavior of anyone else that night, I should have been much more responsible in how I handled myself and for that am sorry to my teammates, my fans, my fellow competitors, my sponsors, and the hosts of this great event. I am very proud to represent my country in Olympic competition and this was a situation that could and should have been avoided. I accept responsibility for my role in this happening and have learned some valuable lessons.

I am grateful for my USA Swimming teammates and the USOC, and appreciate all of the efforts of the IOC, the Rio ’16 Host Committee, and the people of Brazil who welcomed us to Rio and worked so hard to make sure that these Olympic Games provided a lifetime of great new memories. There has already been too much said and too many valuable resources dedicated to what happened last weekend, so I hope we spend our time celebrating the great stories and performances of these Games and look ahead to celebrating future successes.

I’ve bolded some key phrases that call out the weakness of the attempt. Lochte avoids naming what he did wrong: he’s just apologizing for his “behavior” and for “not being more careful and candid” in how he described events. In essence, he says, it was a mistake—my bad. He tries some blame shifting, mentioning the trauma of foreign travel and the language barrier and suggests that others were at fault too. He tries to transcend with some flag-waving about how proud he is to represent his country and how gratefully he really is to the people of Brazil. Then he says, in essence, too much time has been spent discussing this, so let’s move on and celebrate athletics. It’s an apology by someone not used to having to be responsible for his behavior.

As is often the case with bad apologies, Lochte had to try again. The next day, interviewer Matt Lauer asked if Lochte should have come forward earlier. He continues to reframe his behavior—vandalism and lying about the confrontation with the security guard—by saying he was taking “full responsibility” for his actions, but still not naming them. He went on to euphemistically characterize his behavior as not just exaggerating the story but over-exaggerating it, “Because if I didn’t over-exaggerate the story…none of this would have happened. We wouldn’t be here. We wouldn’t be sitting here discussing this.” Suddenly, it’s all about him being on the spot. It’s about his description of events rather than his behavior. Asked why, he suggests that he “was still intoxicated.” Lochte goes on in the interview to try the tell the story he would like to be true: that he is not making excuses (he is). And he suggests that it the truth is unknowable: “It’s how you want to – it’s how you want to make look like. Whether you call it a robbery, whether you call it extortion, or us paying just for the damages, like we don’t know. All we know is that there was a gun pointed in our direction, and we were demanded to give money.” Lauer pressed Lochte on the consistency of the details of his story and Lochte fell back on the idea that “people can see it in many different directions.”

When Lauer gets around to asking him how he’d respond to the people of Rio he says he would tell them:

How sorry I am. And my deepest apologies. They put on a great Games. They did everything. The people – of Rio or Brazil, the authorities, everyone there, they put on a great Games. And my immature, intoxicated behavior, tarnished that a little. And I don’t want that, because they did a great job. The fans were amazing. I know going out into my races they were all cheering for me. So, I mean, they were great. They hosted a great Games. And I’m just really sorry. And I hope they can accept my apology.

Lochte still can’t get around to saying what he did other than that his behavior “tarnished” the great games. Lochte may yet apologize further and if he does he might consider returning to Rio to offer restitution and some good works and saying something like this:

“I am here to apologize for my indefensible vandalism and lying during the Rio games. My friends and I vandalized your service station and I lied about the confrontation with the security guard. I disrespected my hosts, embarrassed my country and myself. I am profoundly sorry and hope that in the future I can live in a way that demonstrates my regret.”

No excuses, blame-shifting, or flag-waving. In life, as in the Olympics, a comeback is always possible. But it’s going to take more effort.

Putting modifiers in their place