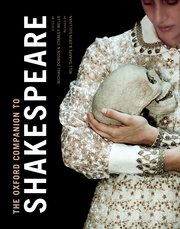 The Oxford Companion to Shakespeare

Forever demanding new performers to interpret them for new audiences under new circumstances, and continuing to elicit a rich worldwide profusion of editions, translations, commentaries, adaptations and spin-offs, Shakespeare’s works have never behaved like unchanging monuments about which nothing new remains to be said. The histories of important theatre companies need almost continuous rewriting. Both Shakespeare’s Globe and the Royal Shakespeare Company, for example, carried out some significant architectural self-reinvention between 2001 and 2015 and a fair few changes of artistic policy too. Current critics and artists move from bylines to obituaries in a sort of permanent melancholy background knell. (I remember adding ‘d.2000’ to the entry about Sir John Gielgud when the first edition of The Oxford Companion to Shakespeare was just going to press; Alan Howard’s ‘d.2015’ just missed the deadline for the second.) Yet neither Stanley Wells nor I could have anticipated the extent of changes in the culture at large and to Shakespeare’s place within it within the last fifteen years.

While the last two decades have seen a boom in biographies of Shakespeare, there have been no major archival discoveries about his life, though if the Cobbe portrait (brought to fresh public attention in 2009) is genuinely a likeness of Shakespeare we may be able to make some new inferences about his interactions with the aristocracy (more of which were convincingly teased out of his poem ‘The Phoenix and Turtle’ by James Bednarz in 2012). Recent theatre archaeology, meanwhile, notably at the site of the Theatre in Shoreditch (the main playing place of the Lord Chamberlain’s Men until they dismantled it and recycled its timbers to build the Globe in 1599), has tended to confirm earlier hypotheses rather than to overturn them. More attention is devoted to new Shakespearean theatres rather than old. These have included not just the remodelled Royal Shakespeare Theatre in Stratford (2010) and the indoor, neo-Jacobean Sam Wanamaker Playhouse in London (2014) but more novel structures elsewhere in the world. The remarkable Teatr Szekspirowski in Gdansk, Poland (2014), for example, a distant dream in 2001, can convert from being an indoor, seated, proscenium-arch venue to being an outdoor yard-based one (its shape based on that of the Fortune in London) thanks to its magnificent self-opening roof.

The worldwide attention given to the opening of Gdansk’s new Shakespearean playhouse, itself designed to serve a well-established and growing international Shakespeare festival, is one minor symptom of a much larger change in Shakespeare’s status. In 2015, to think about Shakespeare primarily as the cultural property of the British, or even to regard him solely as the supreme literary figure of Anglophone culture, seems parochial as never before. Although Shakespeare continues to benefit from the dominance of English as a world language, more people now speak English as a second or third language than as a first, and globally at least as many performances of Shakespeare are given in translation as are offered in his native tongue. (German-language productions in Germany, for instance, alone outnumber English-language productions in Britain and Ireland.) Geopolitically, this has produced a definite shift in the balance of power in Shakespearean performance and scholarship. The years since 2001, for instance, have seen the formal establishment of the European Shakespeare Research Association (2007), the foundation of the Asian Shakespeare Association (2014), and the inauguration of the Asian Shakespeare Intercultural Archive (2010), a Singapore-based digital resource which provides online access to video recordings of a whole new wave of Shakespearean performances from Korea, Japan, Singapore, Taiwan, and mainland China. (In 2015, tellingly, even the loyally Stratford-focused RSC is embarking on a project to foster a new, more actor-friendly translation of the plays into Mandarin.) These developments became visible even to those British theatregoers who never venture beyond London in 2012, when the Cultural Olympiad that accompanied the London Olympics chose a World Shakespeare Festival as its central feature, and Shakespeare’s Globe contributed by hosting visiting productions from all over the world – memorably advertised as ‘36 plays in 36 languages.’

If Anglophone live performance has had its centrality to the world’s engagement with Shakespeare challenged over the last two decades, then so has live performance itself. Film and television have continued to adapt and appropriate Shakespeare (in Britain, in Hollywood, and ever more visibly in India and the Far East too), while theatre audiences at mainstream performances by large companies are more and more likely to find themselves in the company of television cameras, as more productions are digitally streamed in real time to screens around the world in a curious 2-D hybrid between live theatre and the cinema. The physical book, and even the library, meanwhile, have been equally decentred. Nowadays ‘digital Shakespeare’ is more likely BuzzFeed quizzes, satirical memes, movie trailers, and live-performance tweets than specialist-content subscription sites in libraries.

Older scholars, then, have been fortunate to recruit those that, among their many other qualifications for the job, are significantly younger than us. It isn’t exactly that we feel ourselves to be closer to the Shakespeare of Richard Burbage and the First Folio than to that of Tom Hiddleston and YouTube, but it has been a definite advantage to have as colleagues brilliant commentators on 21st-century Shakespeare.

Michael Dobson is Professor of Shakespeare Studies and Director of the Shakespeare Institute, University of Birmingham, an executive trustee of the Shakespeare Birthplace Trust, and an honorary governor of the Royal Shakespeare Company: his previous appointments include posts at Oxford, Harvard, the University of Illinois at Chicago and the University of London, and he has held fellowships and visiting appointments in California, Sweden and China. His publications include The Making of the National Poet (1992), England's Elizabeth (with Nicola Watson, 2002), Performing Shakespeare's Tragedies Today (2006), and Shakespeare and Amateur Performance (2011). He, Stanley Wells, Will Sharpe, and Erin Sullivan are the editors of The Oxford Companion to Shakespeare, Second Edition.