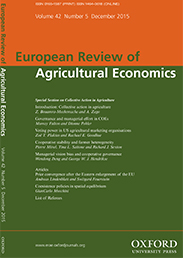 The European Review of Agricultural Economics is now firmly established as the pre-eminent forum for the discussion and dissemination of theoretical and applied agricultural economics research in Europe, with a readership that extends worldwide.

Why would agricultural producers engage in practices such as conservation, animal welfare, waste management, or organic farming? The literature hints that economic, social, and personal motivations are drivers of adoption. Sustainable practices are welcomed by farmers if there is a potential increase in profitability through more efficient processes, or as a source of differentiation (i.e. labelling). From a social perspective, sustainability has become a license to operate in food supply chains, where long-term viability depends on the fit between firm and society values. In addition, personal motivations are becoming more relevant, since we are undergoing increasing awareness on the importance of sustainability.

This raises the question: how can policy-makers help to increase the likelihood of adoption of sustainable practices by agricultural producers? Should the focus be placed on economic incentives, or on programs that promote awareness and education on the benefits of sustainability? Is it better to emphasize standards, regulations, and enforcement? The design of effective programs that stimulate adoption requires an understanding of producers’ motivations and decision-making processes, besides the analysis of underlying market conditions.

An example of the use of economic incentives can be found in the Netherlands, where the Dutch government offers tax benefits to farmers that obtain a certificate on sustainable livestock practices as part of Maatlat Duurzame Veehouderij (MDV) program. Under MDV, farmers can write off up to 75% of their investment on certified stables. In order to obtain the certificate farmers must comply with strict standards on emissions, energy use, and animal health, among other items. More than 3,500 MDV stables have been built since 2007, making it an important contribution to the Dutch livestock sector.

We have developed a model explaining the relationships between economic, social, and personal expected rewards, and the adoption of sustainable practices. We tested the model by interviewing 164 hog farmersin the Netherlands asking whether they built (or were in the process of building) an MDV stable, their motivations to do so, and their financial risk attitudes. We also evaluated the effect of perceived tax benefits, the size of the farm, and the education level of the farmer.

We found that expected economic rewards and perceived tax benefits were the main drivers for the decision to build a certified stable, while expected social and personal rewards and the level of education of the farmer did not influence the adoption. So why did personal and societal rewards not matter much for Dutch hog farmers? Is that something to be expected for similar industries?

Market conditions for hog farmers in the Netherlands do not differ much from those of many other (agricultural) sectors. In recent years, margins have been low, and the number of farms decreased to almost a half of those seen in the early 2000’s, with most of the small farms exiting the market. On top of a strong competitive environment, an increase in guidelines and policies expected to become legislation soon are driving the decision to adopt sustainable practices. As a result, it is not surprising that farmers focus on tax benefits and other expected economic rewards.

Although tax benefits and tighter legislation seem more persuasive than education under the current market conditions, it is important to highlight that there is room to raise the awareness about benefits and costs of sustainable practices, as well as building clear standards for the stakeholders in the industry, such that an agreement on the value of sustainability can be reached. In that regard, we also find a role for risk attitudes on the decision to adopt. When farmers perceived higher financial risk, their willingness to adopt decreased, while on the other hand more risk-tolerant farmers were more willing to adopt. As such, it is important to educate farmers on the potential financial risk of the investment, and is worth considering a market segmentation approach to policies, such that each policy scheme can be targeted to the risk profile (tolerance) of each group.

Andres Trujillo-Barrera is Assistant Professor of marketing and consumer Behaviour at Wageningen University, Netherlands, Joost M.E. Pennings is Professor of Finance and Marketing at Maastricht University and Wageningen University, Netherlands, and Dianne Hofenk is Marketing Intelligence Analyst at EDM, Netherlands. Their article "Understanding producers' motives for adopting sustainable practices: the role of expected rewards, risk perception and risk tolerance" in European Review of Agricultural Economics is free to read online for a limited time.