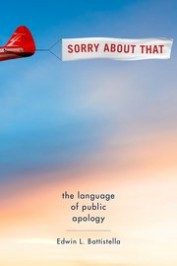 I always see some shocked faces when I tell a classroom of college students that there is nothing wrong with beginning a sentence with the word and (or for that matter, the words but, because, or however).

I encourage them not to take my word for it, but to look it up, so I refer them to Ernest Gowers’ 1965 revision of Fowler’s Dictionary of Modern English Usage, which explains that the idea is “a faintly lingering superstition.” I also often suggest Garner’s Modern American Usage, which calls it a “rank superstition.” Superstitions don’t age well, apparently.

Even Wilson Follett’s stuffy Modern American Usage calls the rule “a prejudice [that] lingers from the days of schoolmarmism rhetoric.” William Safire included it in his book of “misrules” of grammar, and Strunk and White didn’t mention it as a problem at all. So there.

Yet the superstition persists, and it remains a common belief among students entering college.

The and style, which linguists sometimes call paratactic, is common in early middle and early modern English, as a look at the Anglo-Saxon Chronicle, the Canterbury Tales, or the King James Bible will show. So how did this bit of folklore come about?

The idea that one shouldn’t begin a sentence with and was not one of the prescriptive dicta proposed by eighteenth century Bishop Robert Lowth or by his imitator Lindley Murray, but it did show up in some nineteenth century language commentary. As Dennis Baron first noted, George Washington Moon singled and out in his 1868 book The Bad English of Lindley Murray and Other Writers on the English Language.

Moon wrote that “It is not scholarly to begin a sentence with the conjunction and.” (He was referring to George Perkins Marsh, the scholar, diplomat, and environmentalist who penned Lectures on the English Language in 1860.) Marsh’s comment is telling, because he refers to sentence-initial and as “not scholarly,” suggesting that avoiding and is a matter of style or rhetoric.

The misconception that it is an error of grammar is a generalization of the reasonable rhetorical advice not to overuse coordination. If writers rely only on and, essays can become a mere sequential narrative: “It was summer and we went to the beach. And the sand on the beach was very hot. And after a while we got tired so we went home. And Mikey got sand in his bathing suit and the sand got all over the car.” You get the idea.

But what changed from the days of the King James Bible with its many sentence starting ands? One thing that changed was that scientific writing emerged as a genre with a great deal of prestige. Charles Bazerman’s 1988 classic study Shaping Written Knowledge traced the history of writing in The Philosophic Transactions of the Royal Society of London, noting that scientific writing shifted from observations of the natural world to proof-like test of theories. In fact, scholar Heidrun Dorgeloh compared the frequency of sentence-initial and in Modern English and Early Modern English narrative and scientific texts. She concluded that the use of and to begin a sentence “became associated with older, more narrative, and hence less professional style, and thus became increasingly stigmatized.” Her conclusion echoes George Washington Moon’s remark that beginning a sentence with and was somehow “not scholarly.”

Another thing that changed was mass education and the challenge of teaching sentence structure and writing conventions to large numbers of children. Several scholars have suggested that the supposed incorrectness of sentences beginning with and arose from efforts by school teachers to direct pupils away from the overuse of and. As linguist Arnold Zwicky put it:

Teachers quite rightly view this system of sentence connection as insufficiently elaborated, and they seek ways of getting students to produce connectives that have more content than vague association or sequence in time. At some point, I speculate…a blanket proscription, was born. Probably in elementary schools, from which it would have diffused to secondary schools and beyond.

But as students move beyond the elementary levels, we need to let them know that it is no error to begin a sentence with a conjunction. Professional writers and editors whom I have asked find sentence-initial conjunctions unobjectionable. One editor recently for a national publication put it to me this way: “As editorial director, I’m the decider. And I frequently use them in my own writing. And I allow them.”

And while we don’t know who first articulated the superstition that sentence initial conjunctions are errors, it is the sort of superstition we should be careful not to pass along to future generations.