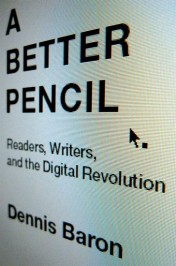 There’s been a lot of talk lately about what pronouns to use for persons whose gender is unknown, complicated, or irrelevant. Options include singular they and invented, common-gender pronouns. Each has its defenders and its critics. Then there’s the universally indefensible option of generic he. We avoid it today because generic he is sexist, but although that was the form approved by many eighteenth-century grammarians, some of them objected to it. Both the grammar politics and the gender politics of he have always been complicated, and he probably shouldn’t have become generic in the first place. But the politics of he turned literal too in the United States when women sought, and won, the vote.

Generic he first derived its authority from a rule about Latin gender that was applied to English even though gender in Latin, which has to do with word classes and suffixes, has nothing in common with gender in modern English, which is based entirely on chromosomes and social construction. Here’s how William Lily states the rule, called “the worthiness of the genders,” in the grammar he wrote for English students of Latin in 1567:

William Lily, A Short introduction of grammar, 1567, rpt 1765, p. 41; Lily actually lists seven Latin genders, including two types of common gender, along with the doubtful and the epicene. Later readers—men—explained it by saying “The masculine embraces the feminine.” It was like they were still in junior high school.

When grammarians applied this Latin rule to English in the eighteenth century, it fit all too neatly with a society that found males more worthy than females and had no problem with he meaning ‘everyone’ except when it came to voting, or having any rights, or being, like, a person.

Eighteenth-century grammarians also specified a pronoun concord rule which requires pronouns to agree with their antecedents—the words they refer to—in gender and number. That means singular they, in a sentence like “Everyone loves their mother,” violates the number agreement part of the agreement rule, since everyone is singular and their is plural. But in the 1790s, some commentators began to notice that generic he was also ungrammatical: in “Everyone loves his mother,” his agrees with everyone in number, but not in gender, since everyone is a common-gender noun, but his is masculine. A couple of writers thought that one way to solve the problem of generic he would be to invent a new pronoun, but that just hasn’t worked out very well.

In the nineteenth century, the politics of feminism is finally brought to bear on generic he, in politics. In 1875, one anonymous writer, who can’t avoid sounding paternalistic, manages to realize that generic he may be good grammar, but it’s also sexist. In contrast, singular they may be ungrammatical, but at least it’s not unfair to women:

The instincts of justice are stronger than those of grammar, and hence the average man would rather commit a solecism than ungallantly squelch the woman in his jaunty fashion. [Findlay [OH] Jeffersonian, 14 May, 1875, p.1]

The politics of he began to move from grammatical to literal as the issue of women’s suffrage gained more attention, and both supporters and opponents of women’s rights focused on the scope of the pronoun he. At least one suffragist sought to make traditional grammar work for women. Equal Rights Party member Anna Johnson argued that, if he was generic, if he could refer as well to she, then statutes describing voters as he could not be used to bar women from voting. Here is what Johnson told John J. O’Brien, Chief of New York City’s Election Bureau:

[T]he English language is destitute of a singular personal pronoun, third person, of common gender; but usage sanctions the employment of “he,” “him” and “his” as of common gender. Therefore under “he” women can certainly register. [“The last days of registry.” New-York Tribune, 26 Oct., 1888, 4]

Although Johnson said she managed to register, her argument didn’t make it easier for other women to get on the rolls, because the registrars thought it was fine for he to be generic in grammar but not in politics. Women didn’t get the vote in New York State until 1917, three years before the Nineteenth Amendment.

If he really did mean ‘men only’ when it came to voting, then any laws with masculine pronouns could mean ‘no women.’ With no common-gender pronoun available to clarify a law’s intent, courts and public opinion were divided on the inclusiveness of he. In 1902, the Maryland Supreme Court ruled that women couldn’t be lawyers because the law on eligibility refers to lawyers as he. According to the court, “unless this can be interpreted to include the feminine gender, then the court can find no legislation upon which to base a right to admit the present applicant” (from the Biloxi [MS] Daily Herald, 6 Feb., 1902, 2). In response, the Maryland legislature promptly changed the law, and the first woman was admitted to the Maryland bar later that same year. But erasing sexist language won’t erase sexism: women could practice law in Maryland, to be sure, but they weren’t admitted to the Maryland Bar Association until the 1950s.

Generic he came up as well in American politics when women sought elected office. The Nineteenth Amendment wasn’t passed until 1920, but women got the vote in Colorado in 1893. In 1909, prominent Denver resident Sarah Platt Decker considered a run for Congress, prompting a pundit to ask whether, if she won, the use of he in the United States Constitution would prevent her from serving in the House.

The Constitution provides that “no person shall be a representative . . . who shall not, when elected, be an inhabitant of that state in which he shall be chosen” (Art. I, sec. 2, emphasis added). According to the writer, originalists would say this means Congress is a boys club, no girls allowed:

Strict adherents to the letter of the Constitution maintain that the presence of the masculine pronoun, and the absence of any other, obviously renders ineligible any person of the feminine persuasion.

Even if he is found to be generic, the writer goes on to wonder,

whether a woman politician of congressional caliber would permit herself to be elected as a “he.” In the event of her making this concession . . . would she allow herself to be hailed as a “congressman?” [“Gender in politics,” Manchester Union, rpt., Baltimore American, 7 Aug., 1909, p. 8]

Platt Decker didn’t run after all, but in 1916, Jeanette Rankin, from Montana, became the first woman elected to Congress, prompting another look at Article I, sec. 2. The Washington Post cites “students of the Federal Constitution” who warn that the masculine pronoun might prevent Rankin from being seated by the House of Representatives. But the Post quotes Barton Payne, a prominent Chicago jurist, who dismisses this objection:

As for the “he” in the Federal Constitution, I don’t believe it would be construed so as to prevent Miss Rankin from accepting the seat in Congress. [“Argue That ‘He’ in Constitution Might Bar Miss Rankin From House,” Washington Post, 12 Nov., 1916, p. 6]

Another writer clearly uncomfortable with a woman in the House comments on the “dilemma” of what to call Rankin when she is seated: the “lady from Montana,” the “person from Montana,” or “the member from Montana”? (Morning Oregonian [Portland], 26 Nov., 1916, p. 12). As it turned out, Rankin was seated, and neither the world, nor the English language, exploded.

Today, the literal politics of generic he is settled. As the second-wave feminist slogan puts it, “A woman’s place is in the House, and in the Senate.” And in the White House, as well. And the gender politics of the form is settled as well: all the major grammars, dictionaries, and style guides warn against generic he not because it’s bad grammar (which it is), but because it’s sexist (which it also is). The authorities don’t like the coordinate his or her, either: it’s wordy and awkward. The only options left are singular they or an invented pronoun. None of the 120 pronouns coined so far over the past couple of centuries has managed to catch on. And despite the fact that there are a few purists left who still object to it, it looks like singular they will win by default: it’s a centuries-old option for English speakers and writers, and it shows no sign of going away. Many of the style guides accept singular they; the others will just have to get over it if they want to maintain their credibility.

Thon, a common gender pronoun coined in 1884, made it to Webster’s Second (1934), but never succeeded. So much for “it’s in the dictionary.”

A version of this blog post first appeared on The Web of Language.

Dennis Baron is a Professor of English and Linguistics at the University of Illinois. His book, A Better Pencil: Readers, Writers, and the Digital Revolution, looks at the evolution of communication technology, from pencils to pixels. His previous posts can be found on the OUPblog or on his personal site, The Web of Language.

Five things you need to know about pronouns