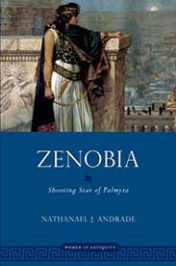 Popular culture often romanticizes Zenobia of Palmyra as a warrior queen. But the ancient evidence doesn’t support that she fought in battles. Instead, we should remember Zenobia as a skilled political tactician. She became ruler without being dominated by the men of her court. She made bold, smart decisions in the face of harrowing pressure and overwhelming odds. Though ultimately defeated, Zenobia had to play a high-stakes game of survival in a time of immense change and violence. The lives of her and her son depended on it.

Where does Zenobia’s reputation as a warrior queen come from? Surely from how she waged a civil war with the Roman government. Otherwise, we can trace its origins to the infamous Historia Augusta. This ancient work consists of biographies of second and third-century Roman emperors that launch barrages of gossip, rumor, and misleading stereotypes. In its short bios of imperial usurpers, it states that Zenobia took part in her husband’s campaigns against the Persians and often marched with her troops. It never specifies that she fought in battles. But popular culture has made Zenobia into a warrior queen anyway.

When we look to the other major ancient source for Zenobia, the author Zosimus, we encounter a clarification. Zenobia traveled with her army but didn’t fight. When her army engaged Roman forces near Antioch in 272, she awaited the battle’s outcome from the city. No other ancient source disputes this. Even the later Arabic accounts of al-Zabba, a queen based on Zenobia, portray her as a hardened political tactician navigating serious violence. Avenging her murdered father, she lures his killer to his demise through a false marriage proposal. When he arrives at her court, she unveils her intention not to marry by exposing her braided pubic hair and then has him killed. But she doesn’t fight in wars.

For the most part, the Historia Augusta doesn’t even portray Zenobia as a virtuous warrior queen. In its bio of the emperor Aurelian, the man who defeated her, it depicts her as an immoral and ambitious despot. Its account is obviously hostile. It even forges insolent letters allegedly addressed by Zenobia to Aurelian. Otherwise it impugns her for doing exactly what powerful men did: violence and politics. But its portrayal is apt in one key way. Zenobia was politically astute.

Zenobia the skilled politician justifiably dominates modern histories. The ancient sources support how she navigated terrifying, lethal circumstances with aplomb. To understand her as modern historians do, we must understand how she came to power.

How Zenobia rose to power

Zenobia was born (c. 240) on the eastern edge of a Roman empire where powerful men kept killing people that they once called friends (or enemies). It was a time of constant civil wars, military overthrows, murdered emperors, and foreign invasions. Zenobia’s husband Odainath rose to power at Syrian Palmyra in the 250s. Skilled at fighting Persians, he worked harmoniously with the imperial government. But during the 260s he ruled the Roman Middle East and adopted royal titles for himself and his eldest son by a prior marriage. When Odainath and Zenobia married, they had a son named Wahballath.

When Odainath and his eldest son were mysteriously murdered in 268, Zenobia emerged as ruler of Palmyra and Roman Syria. Her justification was that she was Wahballath’s guardian, Odainath’s underaged heir. But the ancient sources differ wildly in how they describe Odainath’s death and Zenobia’s seizure of power. We can dismiss the rumor that Zenobia had plotted against Odainath. The gossip-mongering Historia Augusta is responsible for that. More likely is that Odainath’s enemies at Palmyra had gotten to him and that Zenobia had them killed when she seized power. All that is clear is that Odainath’s friends and enemies alike had motive to kill her.

Odainath’s enemies aimed to eliminate his household altogether. This made both Zenobia and Wahballath into targets. But Odainath’s supporters were dangerous too. They could rule through Wahballath, Odainath’s surviving heir. They did not need Zenobia alive for that. Her sheer survival supports that she was not a puppet managed by powerful men. She had no value as one. If she hadn’t seized real power, she probably wouldn’t have lived.

Zenobia’s rise to power testifies to decisive moves that she made under terrifying circumstances. Sources written in Latin, Greek, rabbinic Hebrew, and Arabic agree that she wielded supreme authority, not her generals and advisors. But Zenobia came to power in a den of vipers where power-mongering and violence never ceased. Some notables at Palmyra were biding their time to betray her. Meanwhile the Roman government denied that she could transfer Odainath’s titles and authority to Wahballath. Classifying her as a usurper, it schemed to get rid of her. Zenobia faced overwhelming odds her entire reign.

Zenobia confronted these odds remarkably. The sources agree that she managed her realm admirably for four years. Only in 272 did the emperor Aurelian invade Roman Syria and remove her from power. Until then, she met and corresponded with orators, historians, and itinerant preachers. She imitated prior women rulers and pursued the regal ideals of philosophers. She waged an impressive, if failed, civil war with the imperial government. But two factors taint her record. One is the possibility that her offensive campaigns in Arabia, Egypt, and Anatolia were a strategic blunder. The other is that she betrayed her advisors, including the notable philosopher Longinus. Neither criticism is entirely fair.

“Zenobia survived by exploiting how men stereotyped women as weak and immoral. If she had been a man, her conduct would attract less scrutiny.”

It can be attractive to classify Zenobia’s offensive campaigns in 270-271 as a needless escalation, one that made reconciliation with the Roman government impossible. In theory, she could have just governed Syria, especially in the empire’s current instability. Her campaigns have even attracted to her what is often a backhanded compliment for women: “ambitious.” But Zenobia surely realized that the Roman government would not tolerate her rule and that war was inevitable. She had to move first to get the upper hand and amplify her resources. Initial success would make victory or renegotiation more likely. If she waited, defeat was much more certain. Even in its contemporary state, the Roman government was more powerful than hers.

Ancient sources also claim that Zenobia, once defeated, betrayed Longinus and other advisors to Aurelian. She posed as a feeble woman who had acted on their compelling advice. Some (like Edward Gibbon) have ascribed Zenobia’s actions to womanly weakness. But we shouldn’t hold her to a double standard when assessing her aspirations and actions. We don’t need to praise what Zenobia did. But we should accept that she was behaving like contemporary men who played political hardball. Sometimes survival involved betrayal. Zenobia survived by exploiting how men stereotyped women as weak and immoral. If she had been a man, her conduct would attract less scrutiny.

Ultimately, Zenobia’s political tactics enabled her and her son to survive. Despite some traditions that she starved herself to death, the best ancient testimony supports that Aurelian had her march in his triumph in Rome while weighed down by gold and jewels. But Aurelian decided that she and her household were worth sparing. Zenobia spent the rest of her life on an estate at Tivoli. It may look like an inglorious end to her story. But in truth, it’s a testament to her political skill.