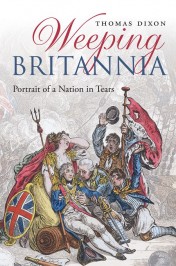 Weeping Britannia: Portrait of a Nation in Tears

The international response to the photographs of the dead body of three year-old Syrian boy Aylan Kurdi, washed ashore on a Turkish beach on 2 September 2015, has prompted intense debate. That debate has been not only about the proper attitude of Britain and other countries to the refugee crisis, but also about the proper place of strong emotions in political life – a debate between sentimentalists and rationalists. While the sentimentalists think it is right that our feelings about that picture should shape the public debate, the rationalists ask what factual or logical difference a single image can possibly make. This recent episode has been a reminder – for many a troubling one – of the power of raw emotion, and of tears, to transform a political debate.

David Cameron’s initial comments last week, stating his view that taking more refugees into Britain was not the answer to the crisis, made him seem oblivious to the public mood of grief and compassion, and his political opponents, including Alex Salmond and Nicola Sturgeon of the SNP, took the opportunity to condemn his heartless ‘walk on by’ attitude, contrasting it with their own more sympathetic response. Sturgeon reported that she had been ‘reduced to tears’ by the pictures of Aylan Kurdi. ‘That wee boy has touched our hearts,’ she said, ‘but his is not an isolated tragedy’.

The Prime Minister’s office was later at pains to point out that Mr Cameron had made his initial comments before he had seen the photographs of Aylan. Soon Cameron’s tone and policy had both changed. He spoke of being deeply moved, as a father, by seeing the photographs. Those words will have recalled for many of us Cameron’s own heart-breaking experience of losing his son. The 2010 General Election campaign was notable for the fact that both the main party leaders – Gordon Brown and David Cameron – were moved to tears during TV appearances – in both cases when speaking about the loss of their own child. The previous year, speaking in the House of Commons about the death of Ivan Cameron, Gordon Brown said, ‘Every child is precious and irreplaceable, and the death of a child is an unbearable sorrow that no parent should ever have to endure’. It is precisely such a thought that is behind the emotional response to the pictures of Aylan Kurdi.

On the rationalist side of the current debate, however, in a column for the Times headlined ‘Stop crying if you’re serious about migrants’, Matthew Parris has resisted the tide of feeling, arguing that we must not let our hearts rule our heads, and that the proper remedy for the refugee crisis was ‘no more apparent now that we have seen a picture of a lifeless toddler than it was before’. And Parris is not alone in asking why a highly emotional reaction to one photograph of one boy should change anything. The situation has been just as bad for many months, several commentators have noted, with thousands dying in their attempts to cross the Mediterranean. Should an outpouring of sentiment in response to one picture really make Britain, the EU, and the wider world change its policies?

Leaving aside the question of the correct policy towards the refugee crisis, there is certainly no doubt that a single emotional image can have an effect on politics, and I for one think it is quite understandable, and quite right that it should. As Tom Hamilton put it, using a striking analogy in a tweet last week, ‘Asking why people are moved more by one dead boy than by millions of refugees is like asking why people read novels and not spreadsheets.’

We experience, express, and think about our emotions through the cultural resources available to us – through those words, stories, images, and ideas that make up our own particular emotional style. We learn emotional scripts, you might say, through which we feel and perform our own affective lives. These come from many places, but as the contrast between a novel and a spreadsheet so nicely brings out, the arts and humanities – whether photography, fiction, drama, history, or philosophy – offer a richness of resources that can take us beyond the facts and figures. Was anyone ever moved to tears by a statistic?

“Should an outpouring of sentiment in response to one picture really make Britain, the EU, and the wider world change its policies?”

Most would probably agree that imagery and narrative are central to our emotional lives and that these in turn can and should inform our politics. But we might still wonder whether some images and some emotions are more appropriate than others? Is there something especially sentimental or inauthentic about weeping over someone else’s dead child?

Writing in a very different context, and with his own political concerns, the master of the sentimental death in the nineteenth century, of course, was Charles Dickens.  Dickens’s death scenes produced pangs of feeling, and bucketsful of tears, famously including those of child characters such as Paul Dombey or Little Nell. Although not as frequently invoked as the death of Little Nell, the demise of Paul Dombey was judged by many at the time to be Dickens’s most successful piece of pathos. A prematurely wise man-child, philosophical, frail and out of place among other children – little Paul slowly fades away, gripped by a vision of a river flowing rapidly out to the sea, carrying him from life to death.

Dickens lived in an era in which infant mortality was at a level that those of us living in the modern West can hardly imagine, and there was a flowing back and forth between real bereavements and idealised literary representations, each giving structure and meaning to the other.  Even Oscar Wilde, who famously quipped that one would have to have a heart of stone to read the death of Little Nell without laughing, was a purveyor of highly sentimental stories, including ‘The Selfish Giant’, which ends with the death of a child. We know too, from the recollections of his sons that Wilde used to have tears in his eyes when he read it to them because, he said, ‘really beautiful things always made him cry’.

The images of Aylan Kurdi have given us our own Dickensian moment – a moment of mass emotional response directed towards a contemporary social evil – elicited this time through the medium not of fiction but of photo-journalism. Even Charles Dickens, though, would not, any more than Matthew Parris, have thought that weeping over a child’s death was an end in itself. The point of harnessing human feeling through stories and images is to motivate social action, and that is where tears need to be augmented by other emotions, and by other arguments. Weeping over an image engages our minds and focusses our thoughts on an evil we might otherwise have ignored. Tears are intellectual things. They reveal our beliefs and our priorities and thus have the power to bring about a new political awareness, and to start a new debate.

Even the rationalist Matthew Parris notes, at the start of his recent column, that he wiped away a tear after seeing the pictures of the drowned boy.  And the great Enlightenment sceptic David Hume – so hard-headed in many respects – famously argued that in questions of morality and politics, ‘reason is and ought only to be the slave of the passions’. Our heads are inert and directionless without the promptings of our hearts.

Thomas Dixon is a historian of emotions, philosophy, science, and religion at Queen Mary University of London, where he directs the Centre for the History of the Emotions. A regular contributor to radio and television programmes as an academic consultant, interviewee, and presenter, he was the consultant for Ian Hislop's Stiff Upper Lip: An Emotional History of Britain, a three-part BBC Two series in 2012. The author of several books and numerous articles on the history of ideas, in 2008 he was awarded the Dingle Prize (for the best book on the history of science accessible to a wide readership) for his Science and Religion: A Very Short Introduction, also published by Oxford University Press. In 2014, he wrote and presented a fifteen-part series, Five Hundred Years of Friendship, for BBC Radio 4. His latest book is Weeping Britannia: Portrait of a Nation in Tears (OUP, 2015).