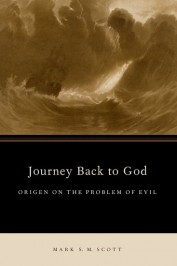 Journey Back to God: Origen on the Problem of Evil

” To be great is to be misunderstood”
–Ralph Waldo Emerson, “Self-Reliance”

If the degree of misunderstanding determines the greatness of a theologian, then Origen (c. 185-254 C.E.) ranks among the greatest. He was misunderstood in his own time and he continued to be misunderstood in subsequent centuries, resulting in his condemnation—or the condemnation of distortions of his ideas—at the Fifth Ecumenical Council at Constantinople in 553 C.E. Why has Origen been misunderstood? How do we understand him better? We need not agree with his theology, but we should at least do him the courtesy of trying to understand him before joining the chorus of his detractors or defenders.

First, Origen was misunderstood because of the complexity of his thought. He was a genius, and geniuses rarely operate within the prevailing modes of thought and rarely fit into simple conceptual compartments. They venture into unchartered territory. They experiment. They hold seemingly incompatible concepts in creative tension. Origen, for instance, affirms both free will and divine providence, both the reality of hell and its eventual destruction, as well as other theological and philosophical binaries. His speculative theology, creative exegesis, and ability to perceive “both/ands” where others see only “either/ors” naturally cause confusion and suspicion. Over the centuries the nuances of his thought have been frequently lost or flatted.

Second, Origen was misunderstood because of the complicated reception of his thought. His legacy was tainted by its simplification and misrepresentation by those who drew selectively on Origen for their own purposes without adequate attention to the subtlety of his thought. Given the sheer volume of Origen’s writings and the vastness of the subjects covered therein, it is not surprising that his theology would be appropriated in ways he would have disapproved of, and so rejections of Origen in subsequent centuries are often rejections of Origenism, that is, the ways Origen was selectively redeployed in later theological contexts. These misapprehensions, then, reflect later theological controversies, where Origen finds himself in the cross-hairs.

Third, Origen was misunderstood because of jealousy. Origen was famous for his prodigious intellect from childhood until his death shortly after undergoing torture for his faith. He was invited by international dignitaries, both ecclesial and political, to illuminate the scriptures and to teach sacred doctrine. His bishop in Alexandria, Demetrius, did not have the intellectual prowess of Origen and may have felt slighted by or jealous of his international fame. Origen was his catechist, after all, and Origen’s eclipse of Demetrius locally and internationally might have incited contempt. That might have contributed to his willingness to condemn Origen unfairly (in his eyes, at any rate), although it is difficult to determine his internal motivations.

So how do we understand Origen aright? First, we should contextualize his thought historically, geographically, philosophically, and conceptually. Historically, Origen wrote before the codification of orthodoxy in the major ecumenical creeds, so we should not hold him to those standards. Geographically, Origen’s thought shifts in significant ways, from his Alexandrian to his Caesarean phase. Philosophically, we should situate him in his Middle Platonic context without dismissing his theology as purely Platonic, especially since he gives decisive weight to the authority of scripture. Lastly, we will understand Origen better if we distinguish between his speculative theology, dogmatic or confessional theology, and exegetical theology, carefully tracing the areas of continuity and discontinuity between them. We need to understand him in his own terms as he understands himself, and his own work.

Second, we should read Origen rather than read about Origen. Ancient and contemporary perspectives have often been filtered through readings of Origen with the result that interpretations of Origen are mistaken for Origen’s position. Henri de Lubac expresses the problem perfectly: “To see him at work: this, we must repeat, is what has been most lacking. Many of the allegations we have recalled would have fallen away on their own after reading him. But Origen is rarely read . . . except by fragments and without making an effort sufficient to understand him. Or else he is approached with prejudices.” (Henri de Lubac, History and Spirit: The Understanding of Scripture According to Origen, trans., Anne Englund Nash (SanFrancisco: Ignatius, 2007 [reprint]), 37-38). Too often evaluations of Origen are based on the judgment of others rather than direct engagement with his corpus.

Finally, we will understand Origen better if we recognize his internal motivations (as far as possible) and self-identification as a man of the church: “But I hope to be a man of the Church. I hope to be addressed not by the name of some heresiarch, but by the name of Christ. I hope to have his name, which blessed upon earth. I desire, both in deed and in thought, both to be and to be called a Christian” (HomLc 16.6). As the son of a martyr, he was driven, I think, by the desire to honor the memory of his father by carrying on the work of teaching divine truths, and comporting himself with seriousness and integrity. His prodigious accomplishments were fueled by his love of the Word of God and his love of his deceased father; his hero.

Origen will continue to be misunderstood, of course. Perhaps that is part of his greatness. Those only slightly familiar with his writings will apply the easy labels and familiar charges to him without serious investigation. Once we move behind and beyond the stock indictments, however, we will encounter a beautiful mind aflame with passion for divine truth and committed to teaching those willing to embark on the journey to union with God with him. Hopefully, if enough people see past the invective, Origen will cease to be the most misunderstood theologian in the history of Christianity. We might still disagree with him on many theological issues, but we will not easily dismiss him, for we will appreciate his unflagging devotion to finding meanings “worthy of God” in scripture for the purpose of spiritual transformation.

Mark S. M. Scott is Assistant Professor of Religious Studies at Thorneloe University. He is the author of Journey Back to God: Origen on the Problem of Evil, just published in paperback.