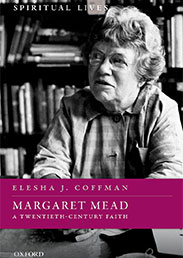 The life of anthropologist Margaret Mead (1901-1978) spanned decades, continents, and academic conversations. Fellow anthropologist Clifford Geertz compared the task of summarizing her to “trying to inscribe the Bible—or perhaps the Odyssey—on the head of a pin. She escapes most categories and mocks the rest.” One way to sketch the outlines of this big picture is to highlight a few numbers:

At the age of 11, Margaret Mead, against the wishes of her non-religious parents, chose to be baptized into the Episcopal Church. She called it “one of the happiest days of my life.”

Aged 23, Mead set out, alone, for Samoa, where she undertook her first field work. The book she published based on her study of adolescent girls, Coming of Age in Samoa (1928), sold millions of copies and made her an immediate, and controversial, star in the nascent field of anthropology.

Fifty-five years after the publication of Coming of Age, another anthropologist, Derek Freeman, published a book purporting to expose Mead’s work as a myth. Freeman had borne a grudge against Mead for decades but waited until after her death to challenge her. His alleged debunking was subsequently debunked itself, but not before conservative culture warriors seized on the narrative that Mead was a fraud, therefore the sexual revolution that she helped set in motion should never have happened.

Mead had at least six significant romantic relationships over the course of her life. This includes her three marriages (to Luther Cressman, Reo Fortune, and Gregory Bateson); two long-term, same-sex partnerships (with Ruth Benedict and Rhoda Metraux); and one significant affair (with Edward Sapir). All of these partners were fellow anthropologists, except for her first husband, Cressman, an Episcopal priest who left the priesthood for a career in sociology.

One child born to Mead, Mary Catherine Bateson. In accordance with her father’s wishes (Gregory cabled from England “Do Not Christen”), Cathy was not baptized as an infant but was allowed, as her mother had been, to choose her own religion. She elected to join the Episcopal Church and become a social scientist. Mead and her daughter collaborated on liturgical renewal projects, including revisions to the rite of baptism for the 1979 US Book of Common Prayer.

Cathy was also the first “Spock baby.” Mead chose then-unknown Dr Benjamin Spock as Cathy’s pediatrician because he supported Mead’s desire to have a natural childbirth and feed her baby on demand. Spock’s landmark Common Sense Book of Baby and Child Care (1946) drew on observations of Mead’s parenting style, which in turn drew on her fieldwork in the South Pacific, as well as her ethical commitment to free individuals from suffocating cultural norms.

There are 16 theological essays in the book Twentieth Century Faith: Hope and Survival (1972), Mead’s volume in the Religious Perspectives series, edited by Ruth Nanda Anshen. Although volumes in the series written by other authors, including Karl Barth and Paul Tillich, became well-known classics, Mead’s book is almost entirely unknown. Her essays addressed such topics as Christian uses of technology, urban development, birth control, aging, and the right to die.

Mead, working with Rhoda Metraux, published 108 columns in Redbook magazine between 1962 and 1978. Most of the columns followed a Q&A format, and topics ranged from abortion to UFOs. As anthropologist Paul Shankman noted in the journal Current Anthropology, “No other anthropologist has had this kind of public forum or done so much with it.”

A total of 1,397 print publications listed in Margaret Mead: The Complete Bibliography, 1925-1975, edited by Joan Gordan. The bibliography is not, in fact, complete, as Mead kept writing until her death in 1978. The bibliography also lists 30 audio recordings (including A Rap on Race, Mead’s 1972 conversation with James Baldwin) and 13 video recordings (including the landmark 1952 documentary “Trance and Dance in Bali.”).

There are more than 530,000 items in the Margaret Mead Papers and the South Pacific Ethnographic Archives, the largest collection in the Library of Congress. The finding aid alone runs to nearly 400 single-spaced pages.

Seven words on her tombstone, which reads, “To cherish the life of the world.” This was one of her signature phrases when she attempted to communicate the purpose of human existence on an interconnected planet. As she wrote in a 1960 essay that used the phrase in its title, “Only if we are able to love—in the sense of cherish and protect, although not agree with—those who are our enemies, while they are our enemies, can we hope to protect the lives of men and the life of the world.” A renowned expert on babies and parenting, as well as a committed, liberal Christian, she could conceive no higher ambition than to make the world safe for other people’s children.

Elesha J. Coffman is associate professor of history at Baylor University. She is the author of Margaret Mead: A Twentieth-Century Faith. Her first book was also published by Oxford University Press, The Christian Century and the Rise of the Protestant Mainline (2013).