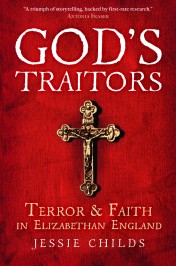 Over the summer of 1582 a group of English Catholic gentlemen met to hammer out their plans for a colony in North America — not Roanoke Island, Sir Walter Raleigh’s settlement of 1585, but Norumbega in present-day New England.

The scheme was promoted by two knights of the realm, Sir George Peckham and Sir Thomas Gerard, and it attracted several wealthy backers, including a gentleman from the midlands called Sir William Catesby. In the list of articles drafted in June 1582, Catesby agreed to be an Associate. In return for putting up £100 and ten men for the first voyage (forty for the next), he was promised a seignory of 10,000 acres and election to one of “the chief offices in government”. Special privileges would be extended to “encourage women to go on the voyage” and according to Bernardino de Mendoza, the Spanish ambassador in London, the settlers would “live in those parts with freedom of conscience.”

Religious liberty was important for these English Catholics because they didn’t have it at home. The Mass was banned, their priests were outlawed and, since 1571, even the possession of personal devotional items, like rosaries, was considered suspect. In November 1581, Catesby was fined 1,000 marks (£666) and imprisoned in the Fleet for allegedly harboring the Jesuit missionary priest, Edmund Campion, who was executed in December.

Campion’s mission had been controversial. He had challenged the state to a public debate and he had told the English Catholics that those who had been obeying the law and attending official church services every week — perhaps crossing their fingers, or blocking their ears, or keeping their hats on, to show that they didn’t really believe in Protestantism — had been living in sin. Church papistry, as it was known pejoratively, was against the law of God. The English government responded by raising the fine for non-attendance from 12 pence to £20 a month. It was a crippling sum and it prompted Catesby and his friends to go in search of a promised land.

The American venture was undeniably risky — “wild people, wild beasts, unexperienced air, unprovided land” did not inspire investor confidence — but it had some momentum in the summer of 1582. Francis Walsingham, Elizabeth I’s secretary of state, was behind it, but the Spanish scuppered it. Ambassador Mendoza argued that the emigration would drain “the small remnant of good blood” from the “sick body” of England. He was also concerned for Spain’s interests in the New World. The English could not be allowed a foothold in the Americas. It mattered not a jot that they were Catholic, “they would immediately have their throats cut as happened to the French.” Mendoza conveyed this threat to the would-be settlers via their priests with the further warning that “they were imperilling their consciences by engaging in an enterprise prejudicial to His Holiness” the Pope.

So Sir William Catesby did not sail the seas or have a role in the plantation of what — had it succeeded — would have been the first English colony in North America. He remained in England and continued to strive for a peaceful solution. “Suffer us not to be the only outcasts and refuse of the world,” he and his friends begged Elizabeth I in 1585, just before an act was passed making it a capital offense to be, or even to harbor, a seminary priest in England. Three years later, as the Spanish Armada beat menacingly towards England’s shore, Sir William and other prominent Catholics were clapped up as suspected fifth columnists. In 1593 those Catholics who refused to go to church were forbidden by law from traveling beyond five miles of their homes without a license. And so it went on until William’s death in 1598.

Seven years later, in the reign of the next monarch James I (James VI of Scotland), William’s son Robert became what we would today call a terrorist. Frustrated, angry and “beside himself with mindless fanaticism,” he contrived to blow up the king and the House of Lords at the state opening of Parliament on 5 November 1605. “The nature of the disease,” he told his recruits, “required so sharp a remedy.” The plot was discovered and anti-popery became ever more entrenched in English culture. Only in 2013 was the constitution weeded of a clause that insisted that royal heirs who married Catholics were excluded from the line of succession.

Every 5 November, we British set off our fireworks and let our children foam with marshmallow, and we enjoy “bonfire night” as a bit of harmless fun, without really thinking about why the plotters sought their “sharp remedy” or, indeed, about the tragedy of the father’s failed American Dream, a dream for religious freedom that was twisted out of all recognition by the son.

Jessie Childs is the author of God’s Traitors: Terror and Faith in Elizabethan England. Her previous book, Henry VIII’s Last Victim: The Life and Times of Henry Howard, Earl of Surrey, won the Elizabeth Longford Prize for historical biography in 2007. She has written and reviewed for several publications, including The Daily Telegraph, Sunday Telegraph, Literary Review, History Today, BBC History Magazine, and Standpoint. Follow her on Twitter @childs_jessie.