The shades of gray multiply (as promised in December 2013). Now that we know that greyhounds are not gray, we have to look at our other character, grimalkin. What bothers me is not so much the cat’s color or the witch’s disposition as the unsatisfactory state of etymology. Stephen Goranson has been able to collect sixty opinions about the origin of the word that he studied (see his comment to my recent post on the dialect of Craven). I cannot boast of such numbers.  Although my database contains close to a hundred items pertaining to the derivation of god, they do not contain so many solutions: only three or four hypotheses have been recycled again and again. The same holds for numerous other words that have been at the center of attention for centuries.  With regard to grimalkin, two reasonable conjectures compete. One has been sanctified by the best dictionaries and repeated everywhere; the other is never mentioned. Such an attitude harms research. Obviously, if everything is clear about the history of a word, no one will return to it, but even a hint of uncertainty, if noticed and taken into account, may result in a new attempt to solve the riddle. It is exactly such a hint that I would like to drop.

Here are the names of the scholars who will figure below. Robert Nares (1753-1829), a distinguished philologist; his work on obscure words in Shakespeare has lost none of its value. Lazar Sainéan (1859-1934; this is a Frenchified variant of the Romanian name, which itself is a variant of his original Jewish name), one of the most ingenious researchers of Romanian and French folklore and linguistics, a man whose studies of French argot and of the native origin of French are among the most important contributions to the subject. Leo Spitzer (1887-1960), an Austrian-born comparative linguist and literary scholar, talented and very prolific (in the United States from 1936 to his death). He was a life-long admirer of Sainéan’s. Both Sainéan and he offered multiple interesting etymologies. Although some of them should be treated with caution, they are always interesting and thought provoking. Paul Barbier (1873-1947), about whom I, unfortunately, know nothing, except that he was a professor of Romance philology at the University of Leeds (1903-1938). I have learned a lot from his articles and would be grateful to those of our readers who may write something about him in a comment and for Wikipedia. 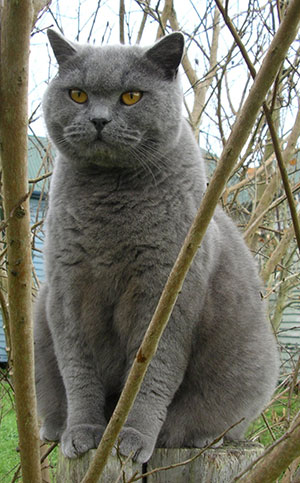 Nares defined grimalkin as “a fiend, supposed to resemble a grey cat.” Skeat said that Nares was probably right. The OED agreed with Nares and Skeat, and so did Charles Scott, the etymology editor of The Century Dictionary and the author of several detailed essays on devilry. But Sainéan, Spitzer (who seems to have known English as well as French and Spanish, to say nothing of his native German, long before he came to America), and Barbier thought differently. Barbier missed the works of his predecessors and reinvented their etymology independently of them. According to Sainéan and especially Spitzer, grimal– is an English adaptation of the French demon Grimaut or Grimaud-, already known from texts in 1561 (and, consequently, having been current for some time before that). If such is the derivation of Grimalkin, its structure is Grimal–kin, with –kin being a diminutive suffix, rather than Gri-malkin. In Part 1 of this series, I noted that outside English the color name gray ~ grey had merged with a word meaning “frightening, terrible.” But since in English gruesome did not become greysome (unlike what happened in German: grau and grausam), an association with grim– may have arisen: Grim-Malkin made perfect sense. Grey Malkin is more remote from Grimalkin. I am not ready to endorse Sainéan’s derivation, but it is not worse than Nares’s, and, as I said at the beginning of this post, my aim consists only in shattering the belief that the origin of Grimalkin needs no further discussion. Scott observed that the English demon Malkin had been attested in Shakespeare’s lifetime; also, in an old ballad Grey Maulkin appears. Perhaps it was abstracted from Grimalkin and understood as a diminutive of Maud or some other feminine name. As long as Malkin meant “cat,” gray fit it perfectly. The question remains open. I would be happy if I succeeded in unclosing it. (Is it possible that Grimalkin was “a word of the year” and that Shakespeare made use of popular slang?)

Our last demon for today is the gremlin. The noun has been around only since 1941 and is one of the war words that stayed and made a spectacular career. Still later (1970) the car called “Gremlin” was introduced. I have no idea why it was given such a mischievous name and whether it lived up to it. John Moore, in an article published in The Observer for November 8, 1942, discussed the folklore of gremlins and suggested that the sprite had come out of Fremlin beer bottles. This amusing explanation has been recycled by several authors, among others by Joseph T. Shipley, the least reliable etymologist among those whose books have been published by the otherwise dependable presses. The rhyme fremlin / kremlin / gremlin is obvious, but, regrettably, that is where we should stop, for we have no evidence that the word, which sprang up among British aviators, owes anything to its look-alikes. A more certain clue is the suffix, for it may have been borrowed from goblin.

Spitzer said in passing that gremlin had the same origin as grimalkin. Other scholars traced this word to an Old English or a rare Dutch verb. Such attempts should be rejected out of hand. If it is true that gremlin had not been heard of before 1941, in what limbo did it vegetate for centuries? It does happen that a word sometimes leads a hidden life in the language of the underworld, escapes from its environment, stops being slang, and enters aristocratic parlors. Gremlin does not seem to be one of such words. The suggestion that the etymon of gremlin is Irish Gaelic gruamín “ill-humored little fellow” is acceptable, but, as ill luck would have it, we don’t know whether the originator of the word was an Irishman or someone fluent in Irish Gaelic. Also, in the life of a word, its history following the moment of “conception” is of no small importance. How did gremlin gain such popularity? Why among pilots? Genies occasionally come out of the bottle; gremlins probably don’t. The origin of gremlin remains unknown, but a respectable imp should have a name beginning with gr-. Otherwise, who will be afraid of it?