Anatoly Liberman's column on word origins, The Oxford Etymologist, appears on the OUPblog each Wednesday. Send your etymology question to him care of [email protected]; he’ll do his best to avoid responding with “origin unknown.” Subscribe to Anatoly Liberman’s weekly etymology articles via email or RSS.

Why brothel? We will begin with the customer. Broþel surfaced in Middle English and meant “a worthless person; prostitute.” The letters –el are a dead or, to use a technical term, unproductive suffix, but even in the days of its efflorescence it was rarely used to form so-called nomina agentis (agent nouns), the way –er is today added to read and work and yields reader and worker. The OED, in the entry devoted to the suffix, does mention agent nouns with –el ~-le, but the examples are very few. They are beadle (from French, from Germanic; literally, one who “bids”: the initial sense was “crier”), the obsolete words losel “profligate,” from lose, with its variant lorel, and brethel “worthless fellow,” the almost obvious predecessor of brothel. The consonant r in lorel, most probably, came from lorn, the base of the past participle of lose (remember the tearful Mrs. Gummidge, “a lone lorn creetur,” first a whimpering, then a brave, self-sacrificing widow in David Copperfield?). Those curious for more details may look up German verloren “lost” and the history of the English adjective forlorn.

The verb breoþan (þ = th) “to degenerate,” from which brethel and presumably brothel were formed and of which no traces are left in Standard Modern English, existed, and so did brieþel “worthless.” The adjective bore an uncanny resemblance to brittle, related to Old Engl. breotan “to break,” another extinct word, and its eastern and Kentish synonym brotel. To be sure, brothel “a depraved, dissipated person” could be formed from the root we find in the participle broþen “depraved,” but why should a doublet of breþel have sprung up in or before the fifteenth century and ousted the older, apparently, well-established form? There are also problems with meaning. My guess is that “profligate,” though the earliest attested sense of broþel may not have been the first one in everyday use. Not improbably, the story began with “whorehouse.”  Such names of immoral people as scoundrel and wastrel, despite the difference in their suffixes (-rel versus –el), were close enough to drag brothel into their net. Anyway, brothel “profligate,” to judge by the extant texts, was short-lived. Such a word certainly occurred more often in conversation than in books, and we have no way of reconstructing its former frequency.

Quite naturally, all those who have tried to discover the origin of brothel have asked the question about the relations between brothel and French bordel. In Modern French, bordel is a borrowing of Italian bordello, but the word existed in Old French. Its root (bord-) is a Germanic word, akin in sound and meaning to English board. From an etymological point of view, bordel designated a small board house, a hovel (-el is a diminutive suffix) and only later acquired the meaning that has stayed without change to this day. Dictionaries assert that brothel and bordel crossed each other’s paths by chance and are not related. But perhaps confusion, not coincidence, played the decisive role here.

In my opinion, the events developed so. A bordel, that is, a hut, a ramshackle building, a temporary and unsafe house, was a structure habitually used for sheltering prostitutes. We don’t know why Romance speakers borrowed a Germanic word for designating such a cabin. At the end of the nineteenth and the beginning of the twentieth century, there was a movement in the study of etymology called “Words and Things” (German “Wörter und Sachen”). Researchers would devote long articles and even books to exactly such matters. Regrettably, nowadays this aspect of history is neglected, and dictionaries discuss words without paying sufficient attention to things. That is why I have no answer to the question posed above. Presumably, the old inhabitants of France and Italy looked on something in the Germanic board house as “special.”

Words for sex and prostitution move easily from language to language. Consider the peregrinations of bordel all over the Romance-speaking world (the noun became “international,” though surely the introduction of the “thing” did not need help from the neighbors), the etymology of ribald (from French, where it is from Germanic: the root (h)rib– meant “copulate”), and the unhealthy popularity of our F-word in the remotest countries of the planet. The OED provides evidence that bordel made its way into Middle English, and in light of this circumstance I would risk defending and developing an etymology offered in The Century Dictionary but disregarded by all later authorities. Unlike breþel, broþel from breoþan — I suspect — never existed. Much more likely, when bordel surfaced in Middle English, it was associated with broþen (the participle). The variation ro ~ or and the like (that is, r preceding a vowel versus r following it: metathesis) is common; thus, the German for board is Brett. Given this scenario, brothel will emerge as a trivial folk etymological alternation of a foreign word. Probably no one noticed that bordel reminded one of board. People needed a vivid picture of a house of sin, not an exercise in historical linguistics. 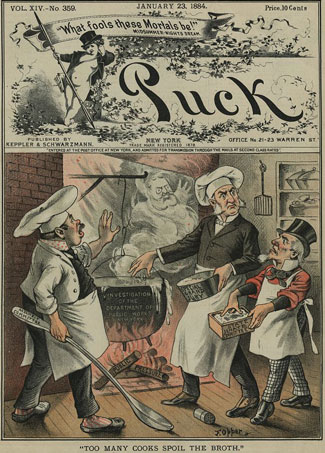 Two factors would have contributed to the association. First, a visitor or an inhabitant of a whorehouse was indeed a “lost” human being, a “losel.” The participle broþen suggested the connection and provided the necessary link. Second, the proximity of broth should not be disregarded. In fifteenth-century slang, for example, a brothel was, among others, called stew and kitchen. Customers were, figuratively speaking, “cooked” in the embraces of prostitutes. (If someone wants to know the origin of broth, “no problem,” as “servers” say in the restaurants of my area: the root is brew, so that broth is something brewed.)

Brothel ended up as a synonym for stew, with a suffix designating the “thing”: here a “kitchen” where the dish was prepared. Losel, wastrel, and scoundrel may have led to an occasional re-evaluation of the sense; hence “profligate,” rather than “bordello.” I would like to repeat my suggestion that, although “profligate” was the earliest recorded sense of brothel, it need not have been the original one. As for a customer of a brothel becoming an article produced in that kitchen, I can mention Old Engl. myltestre “prostitute.” It is said to be an adaptation of Latin meretrix (the same meaning). If this etymology is true, the unusually strong alteration of the Latin word was due to an association with meltan “burn up, consume by fire.” The Old English word for “brothel” was myltenhus (hus “house”).

Brothel has a voiceless sound after o. This may cause surprise, but, if we mentally transpose the letters and read –le for –el, we will discover hassle (as opposed to puzzle), baffle (as opposed to shovel), and the like, all of which have voiceless consonants (fricatives) between the vowel and l. However, the group thl not separated by a syllable boundary, as in athletic or sixthly, occurs only here. All things considered, this is the smallest problem in the history of brothel (the word or the thing). So why bother?

Image credits: (1) House and Ruin On the machair at Smeircleit. Photo by Dave Fergusson, 23 May 2007. Geograph project collection. CC-BY-SA-2.0 via Wikimedia Commons. (2) “Too many cooks spoil the broth” / F. Opper. Puck, 1884. Public domain via Library of Congress.