The comments on the previous post (the ethnogenesis of the “Germans” and the native origin of the word ship, as opposed to the idea that it is a borrowing) deserve a detailed answer, and I’ll give it in this month’s “gleanings,” two weeks from today.  At the moment I will proceed with the “rings.”

Alongside Old Icelandic skip “ship,” we find the verb skipa “arrange; assign.”  It is tempting to suggest that the unattested meaning of this verb was either “arrange things on a ship; prepare a ship for a voyage; make it secure and shipshape” or even “board a ship, travel by ship,” because the connection between skip and skipa can hardly be doubted.  However, not improbably, the earliest meaning of ship was simply “thing made, artifact,” rather than “vessel,” with skipa reminding us of that sense.  Dictionaries do not say much about the relations between skip and skipa but, as cross-references indicate, assume that the two are connected.  We are apt to derive the sense of skipa from that of skip ~ ship; yet perhaps skipa supplies us with a clue to the lost meaning of ship.

Here are some facts.  Icelandic skipa also occurred with the sense “to man” (the king would recruit, select soldiers for a military campaign, and the verb I italicized above is my gloss of skipa.)  The noun skipan (or skipun), also in Old Icelandic, meant “arrangement” and “the manning of a ship.”  Skipa upp, in which upp corresponds to Engl. up, rather unexpectedly, referred to the unloading of a cargo.  The meaning of Engl. up shows that this adverb can designate an action fully completed (as in eat up, read up, and finish up, for example).  As The Oxford Dictionary of English Etymology says: “The use of up, adv[erb] to express complete consumption was prob[ably adopted from Scand[inavian] (e.g. O[ld] N[orse] drekka upp drink up.”  But the use of up in look up (a word), put up (at a hotel; with a difficulty), and hurry up, among many others, shows how versatile this short word is.  Icelandic skipa upp may have meant “make final arrangements in dealing with a ship that has come to port,” hence “unload.”  It is therefore not improbable that Germanic had the word skip– meaning “a well-arranged, well-outfitted thing” that interacted with a near homonym from Greek (“beaker”), on which see the previous post, and acquired the familiar sense (“ship”) later.  Or the extant sense of ship may be the product of the narrowing of meaning: from “thing in good order” to “vessel ready for use.”  It is hard to decide.  Compare Engl. train (from French): first it meant “tarrying, delay; thing that drags or trails,” then “sequence or series,” and only then “a line of carriages.” The sense “means of transportation” does not have to be the original one in any of our designations of a vehicle.

The most interesting “ring” Germanic skip(an) left in a neighboring language is French équiper, which returned to English as equip.  Such double voyages, as Ernst Weekley called them (from Germanic to Romance and back to English), are common.  The Old French source of équiper meant “to embark; board a ship.”  Apparently, Old French retained the sense of the verb not extant anywhere in Germanic.  This is a common case in semantics.  However, the history of the French verb poses problems of its own.  Old English had scipian “to travel by water, navigate,” so that Old French may have taken over its meaning from a word close to Icelandic skipa and modified it slightly.  Besides that, Old French eschiper existed side by side with esquiper, and their relations are not quite clear.  The main puzzle is that today’s equip has nothing to do with ships or the idea of putting to sea.  As noted, équiper first meant “embark.”  Its modern meaning “to fit out” does not predate the sixteenth century.  Medieval Latin had eschipare “to man a vessel”, and it has been suggested that we are dealing with two similar-sounding but different verbs.  This is possible but rather unlikely.  Still stranger is the difference in meaning between equipment “furnishings” and equipage, which did at one time mean “equipment” and only later developed the senses “train of attendants; carriage and horses.”  To the extent that equipage still exists as a living English word, it means only “an elegantly equipped carriage.”  Why and how did horses come in?  Weekley’s guess is astute but unverifiable: perhaps, he says, equipage fell under the influence of Latin equus “horse.”

To complicate the picture (should I say “muddy the waters?”), Icelandic also had the verb skipta (read pt as ft) “to share; divide; change; exchange,” a cognate of Engl. shift, from Old Engl. sciftan “arrange, change; alter the position”; the sense arrange has gone out of use.  Obviously, the Germanic protoform, something like skipatjan, had the familiar root skip-, with the suffix –at and the ending –jan.  Wherever we look, we encounter the meanings “arrange, ordain, determine, fit out; change” and the like.  Nothing points to things destined specifically for sea travel, made of wood, or carved.

A few more “rings” are in order.  Skiff came to English from French esquif, where it turned up at the end of the fifteenth century, a borrowing of Italian schifo, itself a borrowing from Langobardian, an extinct West Germanic language that left numerous traces in northern Italian dialects (compare Lombardy, Italian Lombardia), thus, another double voyage.  Skiff sounds almost like German Schiff “ship.”  Then there is skipper, a loan from either Low (that is, northern) German or Middle Dutch (Dutch seamanship was famous: -ship in seamanship is different from ship being discussed here).  Old French also had eskipre.  It no longer exists in the modern language.  Unlike skipper, Engl. skip (as in skipping rope, skip a page, and skip a grade) is not akin to ship.  That verb surfaced in English only in the thirteenth century, so that it is probably of Scandinavian origin, like most Middle English words beginning with sk. 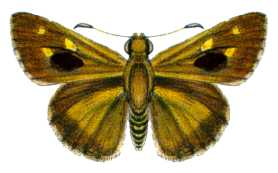 The adjective shipshape makes excellent sense, but it would never have been coined if it did not sound so clever and did not convey the idea of things done perfectly on board a ship.

The butterfly skipper got its name for the quick, darting movements it makes.  Although the verb skip, as pointed out above, is not related to any of the ship words, looking at a beautiful butterfly, especially now that he summer is over, will do no one any harm.

A linguistic League of Nations