We are in deep waters here.  A first puzzle is that ship has exact cognates in Frisian, Dutch, German, Scandinavian, and Gothic, but nowhere outside Germanic.  The ancient Indo-Europeans called their floating vessel something else, and we know what they called it.  The modern echo of that word can be seen in Latin navis (from whose root we have navigation; and remember Captain Nemo’s Nautilus “little ship” and the Argonauts?), as well as in several other languages.  So why ship?

Strangely, this problem is not isolated.  Numerous maritime words, including sea, sail, boat, and many others also lack cognates outside Germanic.  More than one flimsy bridge has been drawn between ship, sea, etc. and words in Latin, Greek, and Sanskrit, but they can seldom carry the weight of doubts and counterarguments.  Even if some of those doubts are exaggerated, the proposed cognates never mean “ship” or “sea”; at best, they refer to some concepts that are supposed to be close.  So to paraphrase the question asked above: What prevented the speakers of Old Germanic from using a congener of the word navis?  The most natural answer seems to be that they did not use it because they did not know it and they did not know it because they once lived far from the sea and did not need ships.  Allegedly, they coined or learned the word only when they migrated to the shores of the great ocean.  If before that they sustained themselves by hunting, agriculture, and cattle breeding, they might use primitive boats but not sailing ships.  This is a classic situation in which the interests of linguists and archeologists meet.  Usually archeologists expect illuminating answers from linguists, while linguists rely on the conclusions of archeologists, without realizing that neither group is able to give even a near definitive answer.

The idea of Germanic tribes’ early migration northward met with fierce resistance.  Some of the opposition was fed by impure politics, some by pure linguistics.  The originator of the idea that the homeland of the modern “Germans” (a common generic term for Germanic-speakers) should be sought more to the south was the Berlin linguist Sigmund Feist, who offended the nationalists by the suggestion that their ancestors had not always lived where they did in the light of history.  Since the time for discussing such questions was bad (the Weimar Republic) and since Feist had the ill luck of being a Jew, his adversaries overpowered him without much effort.  Feist was ostracized, expelled from a prestigious board, and later, after Hitler came to power, targeted by the new laws.  Later he escaped to the Netherlands, where he died, a physical wreck and an outcast.  His friends tried to find an academic post for him in the United States, but he was over 65, and no American university offered him a safe haven.  Although after the war the origin of the Germanic maritime vocabulary again attracted a good deal of attention and the tone of the discussion became considerably less raucous, opinions are still divided.  With regard to ship, some people think that the word is native, while others try to derive it from a foreign source.

The easiest solution would be to suggest that when the speakers of Germanic arrived in their present habitat (assuming that they had migrated to it from the south), they learned the word ship (pronounced approximately as skip) from the people they conquered.  The submerged languages of the vanquished are called substrates.  Within the framework of the migration theory, this conjecture sounds reasonable (Feist was one of its proponents), but since the lost language is unknown (even its influence on Germanic is hypothetical), we cannot go further.  Other scholars tried to find a Greek or Latin word of which ship could have been a borrowing.  The oldest boats probably looked like canoes or kayaks, or pirogues and were hollowed out trees.  Hence the idea to treat ship as an alteration of Greek skaphos “digging; hull.”  It is unclear whether the two senses of the Greek word belong together, but, in any case, neither the vowel nor the consonant match those of ship.  Another “Classical” idea connects ship with Latin scyphus “beaker” (from Greek).  The Old High German cognate of Engl. ship does mean both “ship” and “beaker.” The semantic connection is natural, as Engl. vessel shows. In other languages, too, one word covers “ship” and “receptacle.”  But Germanic has ship, not shif (German Schiff is the product of a later sound change: compare Engl. open and German offen, Engl. leap and German laufen “run,” among many others).  Otherwise, this etymology would have been perfect.  To save it, Vittore Pisani, an eminent Italian scholar, pointed out that in conversational Latin p often changed to f.  In his opinion, the Germanic word was a borrowing of that popular form.  Evidently, the more undocumented steps reconstruction entails, the worse.  Pisani’s idea is not bad but less than fully convincing.

An early guess connected ship with the cognates of the verb shave, that is, “scratch, scrape” (“scratch” was one of its early meanings).  Given this derivation, ship, as expected, would end up going back to “hollowed out tree.”  One can still find this etymology in some dictionaries and books, though it is certainly wrong (here is one of the rare cases when an etymologist can risk saying certainly).  Vowels in Old Germanic words alternated according to rather rigid rules, as they still do in write—wrote, find—found, get—got, run—ran, and so forth.  When nouns were formed from the roots of such verbs, they obeyed the same rules.  The verb shave (which is related to shape: compare Latin scabere, also “scratch, scrape”) belongs to a class in which a, that is, “short a,” alternated with “long o.”  It follows that skip, which has short i, is out of the game, as long as shape and shave are concerned.  For this reason, another root has been proposed, the one seen in Latin scipio “staff; stick”; Slavic chepiti (stress on the second syllable) “to split” belongs here too.  Once again a ship emerged as something built or made of wood (or, according to another suggestion, covered with hides).  I have already said that when a linguistically feasible cognate of ship turns up, its senses have only indirect ties with the meaning “floating vessel.”

I think that in this case a borrowing is more realistic than the derivation from some word for “stick” or “split,” even though primitive boats were indeed hollowed out trees (beams).  My preference will not tip the scale in the long argument; nor is it meant to do that.  Henry Cecil Wyld, to whose etymologies in The Universal Dictionary of the English Language I often refer with approval and even with admiration, gave the well-known cognates and concluded: “…origin & further connexions entirely doubtful.”  Some other dictionaries avoid revealing this miserable truth to their users and confine themselves to enumerating related forms, as if lists of similar-sounding congeners endowed with the same meaning provided a clue to the origin.  But etymologists’ vision is limited, and we should view their inefficient tricks with condescension.  They cannot be told to shape up or ship out.

The title of this post promised “rings.”  Wait for them until next Wednesday.  For now enjoy a fragment of the famous Bayeux tapestry (the second half of the eleventh century), commemorating William’s conquest of England in 1066. 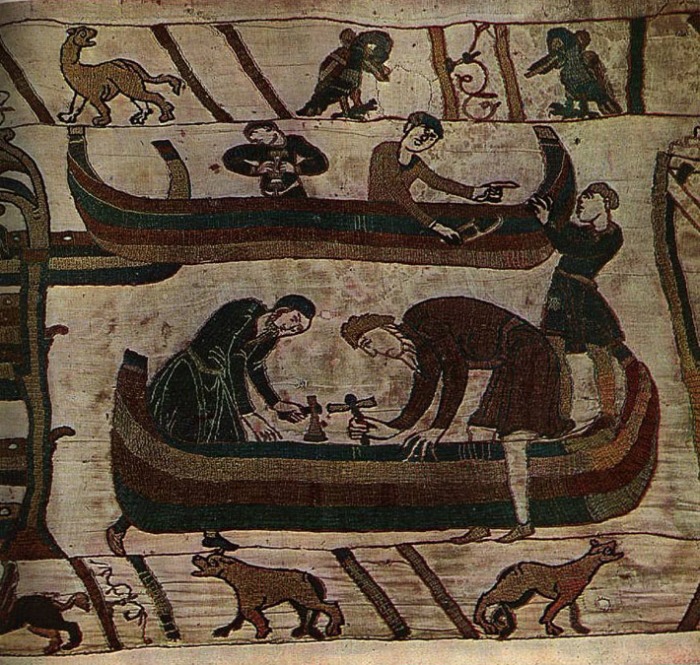