The history of boat is no less obscure than the history of ship.  Britain was colonized by Germanic-speakers in the fifth century CE from northern Germany and Denmark.  It is hard to imagine that the invaders, who became known to history as the Angles, Saxons, and Jutes and who must have known a good deal about navigation, stopped using boats after they crossed the Channel.  But a cognate of boat has not turned up in any modern dialect spoken on the southern coast of the North Sea.  The unexpected conclusion is that the colonizers did not have this word and therefore did not bring it to their new homeland.  In the continental language we now call Old Saxon (not the ancestor of Old English, even though it is close to it), several words for “a floating vessel,” including skip “ship,” two compounds ending in -skip, and two diminutives, occur. They are still recognizable from their reflexes (continuations) in Modern German and English, but none bears any resemblance to Old Engl. bat (with long a, that is, the vowel we hear in today’s father, Prague, or spa).  That the word was popular is certain, for it later made its way into the Romance languages (French bateau, etc.), German (Boot), and Dutch (boot).

Only the Scandinavian languages, Old Icelandic among them, have what looks like viable cognates of boat, namely beit and bátr (á designated the same “long a”), but both are an embarrassment.  Old Engl. bat could be masculine or feminine (which is strange, for the word was common and supposedly required a stable form), whereas Old Icelandic beit was neuter.  To make matters worse, it occurred only in poetry (and very rarely) and meant “big ocean ship.”  The gender may not be a problem, for another beit “pasture” was neuter too, and if that circumstance played no role in the history of beit “ship,” one can suggest that skip, also a neuter noun, influenced it.  But the meaning is a puzzle.  Bátr, which was masculine, referred only to boats with two or four oars; those with eight oars were called skip.

Most reluctantly, some language historians decided that beit and bátr are not related.  Icelandic had the verb bíta (í should be pronounced like Modern Engl. ee) “to bite.” Some verbs form a group called causative.  Compare sit and set.  In the most general terms, set can be defined “make sit, cause to sit.”  Therefore, set is the causative of sit.  I might have cited lay “to make lie, cause to lie” as the causative of lie, but, considering the suppression of lie by lay in the speech of most Americans and some Britons, will abstain from referring to that pair.  Some such pairs are easy to recognize (for example, sit and set); others have diverged in pronunciation and meaning and do not look like belonging together (thus, drench is the causative of drink).  The causative of bíta was beita, and can be glossed as “to cause to bite.”  First and foremost, it meant “to graze cattle” (“cause them to bite the grass”; English bait is closely related to beita).  One of the figurative senses of beita was “to cruise,” as though “make the wind bite the sail.”  It has been suggested that beit “ship” owes its origin to the verb beita.  Whether this suggestion is valid is anybody’s guess.

If Old Engl. bat is native, its long a must have developed from ai, pronounced like the English letter i (for ai was the only source of long a), and we get the protoform bait.  For this reason, some people thought that Icelandic beit, with its ei also from ai, is a borrowing of the unattested Old Engl. bait, but, as we have seen, reconstructing native Old Engl. bat poses the question about the absence of related forms on the continent.  If, however, the Scandinavians took over bátr rather than the unattested bait from Old English, they must have done so after the diphthong ai yielded long a (á).  The borrowing in the opposite direction cannot explain where the Old Icelandic form bátr appeared in the first place.  At one time, an opinion was advanced that perhaps the word could originate in Frisian, but, more likely, the Frisian name of the boat was also borrowed.  The question remains in limbo.

Whoever coined the troublesome noun and wherever it happened, the combination of the sounds b + vowel + t must have meant something to the ancient wordsmith.  It seems that James A. H. Murray, the OED’s first editor, was not sure even of that, for the entry boat opens with the following astounding parenthesis: “OE. bát (unless it is onomatopoeic)….”  What noise did he think could inspire the coining of boat?  The bat-bat-bat of a hammer?  Most often boats get their names from two sources: either they are called tubs of some sort or an image of a tree is invoked.  When a boat is a dugout, reference to a tree is natural.  On the whole, the “motivation” is believed to be the same for calling a ship a ship and a boat a boat.  Two similar conjectures have been put forward about the etymon of boat.  One (by the Swede Evald Lidén, 1892) looked at the Icelandic noun biti “crossbeam,” the other (by the Dutchman Hendrik Kern, 1898) pointed to Sanskrit bhed “to split, cleave”; it does not seem that Kern was aware of Lidén’s publication.  A third etymology, which related boat to Latin fodio “I dig,” has had almost no supporters.

Biti is akin to bíta, discussed above in connection with its causative beita (a “bit” appears as something “bitten” from the whole), and thereby to beit.  (By the same token, Engl. bit is a cognate of the verb bite.) Yet Lidén’s conjecture is unable to answer every question, for we are more interested in boat and bátr than in beit, which, after all, despite the similarity in sound and meaning can be an entirely different word.  Whatever the relations between biti and beit, the affinity of beit to bátr will make sense only if we agree that the Scandinavians borrowed bátr from their insular neighbors when the English word was still pronounced with the diphthong ai rather than with “long a.”  But, as noted above, the existence of a native protoform of Engl. boat is questionable.  Unsurprisingly, dictionaries, unwilling to take sides, either say that the origin of boat is unknown or, if they accept the biti etymology, do so with a good deal of hedging.

The names of vessels are usually borrowed when there is something special in a ship’s model, but we don’t know what could have made the Anglo-Saxon small boat so interesting to the Scandinavians centuries before the Vikings’ raids (centuries before, because the Old English diphthong ai developed into “long a” at a very remote epoch) or later, after the diphthong had been “smoothed,” to use the terminology of some textbooks.  Or was the English word borrowed twice: once with a diphthong (hence beit) and another time with a monophthong (hence bátr)?  (The fact of borrowing is not a grave problem: consider the later triumphant way of boat into the Romance languages.  The baffling part is the lack of cognates on the continent and phonetics.)  Nor do we know whether the ancient object called “boat” was a dugout; it may have been a sailboat.  Then the association with splitting, carving, and crossbeams would perhaps not have been uppermost in the minds of the speakers.  Surrounded by such darkness and set afloat in a sea of suspicious hypotheses, let us look at the Egyptian sun god, as he is crossing heaven toward us in his primitive but splendid felucca. 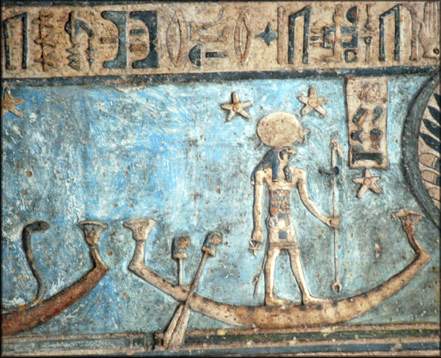