As usual, many thanks to those who commented on the summer posts and asked questions.  The topics covered below show some variety.

One of our most faithful correspondents writes: “According to the Wall Street Journal, Indiana now outlawed teaching script in schools, so the kids can concentrate on their typing.”  He was saddened by the news, and so was I.  He asked me about non-cursive writing in old times, especially in the days of Chaucer.  Here is a brief answer.  The oldest form of the Latin script was the so-called scriptura capitalis.  It features analogs of our capital (upper-case) letters.  In the third and the fourth century CE, simpler characters, more round and meant only for manuscripts, developed from the scriptura capitalis; the script was called scriptura uncialis, and some of its letters resemble our small (lower-case) ones. The appearance of the new script was connected with the use of parchment (before that, people wrote on papyrus, wax tablets, and so forth).  But even earlier the less elaborate cursive letters came into being.  They were meant for everyday correspondence and for all situations in which one needed speed and low cost rather than elegance.  As time went on, the scriptura uncialis began to look like the cursive: this was the semiuncialis.  It later partly merged with some forms of the cursive and became minusculis, which was not too different from our small letters.  This is the script used in most of Old Germanic texts.  But it had several varieties, two of which were especially important: insular (insularis) and continental (mainly Carolingian).  Beginning with the eleventh century, under the influence of the French, the Carolingian script became prevalent in England, and this is the script that Chaucer used.

The names of berries pose an often-discussed problem: compare raspberry, huckleberry, and whortleberry, in which an obscure element precedes berry.  Even when the first element is clear, it sometimes looks odd: Why strawberry?  And gooseberry may not owe its origin to goose.  Similar problems characterize the names of berries in some other languages.  Professor R.W.W. Taylor (Department of Mathematics, National Technical Institute for the Deaf, Rochester NY) commented on a short discussion of cranberry in my book Word Origins…and referred to cranesbill ~ geranium (the root of geranium is geran-, from the Greek word for “crane”), whose fruit  is shaped like a crane’s bill.  Turning to cranberry, he wrote: “…it would seem that in this case the name has been applied based on the characteristic structure of the flower blossom, which consists of four reflexed petals surrounding a long projecting cluster of stamens.”   This is a familiar idea, and it may be true, but some caution is needed.  Dictionaries inform us that cranberry is a fairly recent word, adapted from German.  The earlier names of this berry began with fen- and marsh-, so here we are dealing with German, rather than English, etymology.  In German and in the Scandinavian languages, including Old Norse, the first part was unquestionably the bird’s name.  Even so, it might be another case of folk etymology.  Dictionaries are evasive. They prefer to say nothing about the etymology of cranberry and sometimes go so far as to state that the word’s origin is obscure.  The Scandinavian cognate of crane is tran (with a troublesome alternation of initial consonants).  This is what an authoritative etymological dictionary of Danish says about tranebær: “Adapted from German Kranichbeere, with a folk etymological alteration (under the influence of Kranich “crane”) of German dialectal kran(s)beer “lingonberry.”  (Lingon goes back to lyng “heather.”)  The Old English and Middle High German forms cited in the entry look suspicious, but the allusion in the name seems to be to twisting, as in Engl. crank, with reference to the clump of berries characterizing the plant.  I am not saying that this etymology reflects the ultimate truth, but the reserve our best lexicographers show on the derivation of cranberry should be taken seriously.

The Origin of gobsmacked “greatly astonished”

This word, little known in the United States, spread to everyday British English from the north, and, if I am not mistaken, its form is transparent.  Gob means “mouth,” so that gobsmacked amounts to “hit on the mouth.”  Hence its slangy sense “amazed.”

Mr. Walter Turner writes in connection with my query about the length of the niblick in Jan Steen’s picture (it accompanied the post on golf): “I looked around to see what had been written about the Jan Steen painting but found nothing about the boy’s stick.  Maybe removing some varnish would reveal how the lower end looks.  I tried lightening it up [the result appeared in the attachment posted below], and you will see the stick extends further down than the original image shows.  The ball on the floor might well be part of the things spilled from the basket down there.  However, it is not unlike whatever that is in the little girl’s basket.  [A postscript]: I think the boy had been using the stick, perhaps his father’s golf club, indeed, to chase his big red hoop, which got knocked out of shape in the process.” 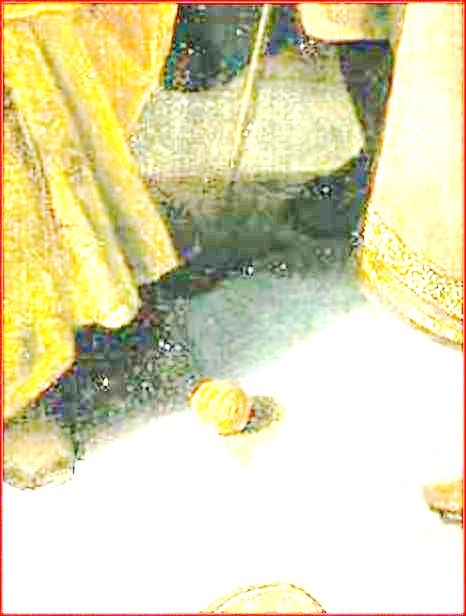 The student are back

Those who remember my quixotic war against constructions like when a student comes, I never make them wait, with its generic they, will enjoy the sequel (also from a letter to the editor): “As an educator, I will meet with your student before and after school for tutoring.  I’ll even invite them to come eat lunch with me as we work on a difficult assignment.”  I think of that student with joy and hope they are grateful.

Shakespeare on Both Sides of the Atlantic

A British MP (Liberal Democrat) said: “I can’t say we’d be as pure if we would have been one of the two governing parties.”  Here we witness correct Shakespearean grammar, which has survived in American English.  This variety of the subjunctive is ubiquitous in the United States.  But Standard British usage seems to require if we were or if we had been, depending on the circumstances.  I asked a British colleague what he thought of the construction.  He answered that he often hears it and that it annoys him.  I know that many people across the ocean read this blog.  Their comments on if we would have been would be greatly appreciated.

It is common knowledge that until not too long ago slang was synonymous with vulgar speech inadmissible in polite society.  Yet a few additional quotations may be of some interest to our readers. All four of them are from Thackeray, a writer extremely sensitive to what we today call slang.  “She was amused by his talk, which was simple, straightforward, rather humorous, and keen, and interspersed with the homely expressions of a style which is sometimes called slang.”  “…this amiable gentleman of course began to abuse the people whom he had injured, and broke out in a volley of slang against the unoffending couple.”  “There is the unmistakable look of slang and bad habits about this Mr. Bloundell.”  “The way in which that Pinckney talks slang is quite disgusting.  I hate chaff in a woman.”

How much has changed since the middle of the nineteenth century!  British English is returning to its Shakespearean roots, and slang has become a respectable way of expression, though sometimes rather irritating, because there is so much of it.  (Decades ago, an old American lady said to me in response to some remark of mine: “This is not a kind of speech to use when addressing a woman.”)

Last time we did not want to turn a regular post into a picture gallery and gave portraits of only Joseph Wright and Walter W. Skeat.  Wright’s wife certainly deserves the same honor.  The photo of her, as she was in 1923, appears on the frontispiece of volume 2 of her biography of Joseph Wright. 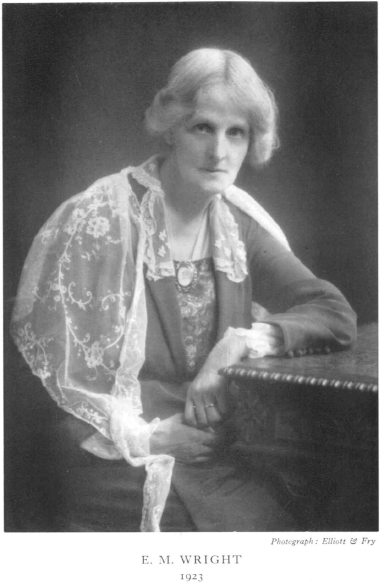