From time to time I mention the unsung heroes of English etymology, but only once have I devoted a post to such a hero (Frank Chance), though I regularly sing praises to Charles P.G. Scott, the etymologist for The Century Dictionary.  Today I would like to speak about Joseph Wright (1855-1930).  He was not an etymologist in the strict sense of this term, but no article on the origin of English words can do without consulting The English Dialect Dictionary he edited.  This multivolume masterpiece contains thousands of local words, whose existence reveals unsuspected and unexpected ties between the words all of us know and their “provincial” kin.  Wright first attempted to offer tentative etymologies in his entries, but then, most wisely, gave up this practice.  The descent of the words with which he dealt is often so obscure that guesses would have done the users only harm.  Sometimes the source of a rural word is evidently French or Scandinavian, but in most cases no clue suggests itself.  Those who are in the habit of looking up origins in our “thick” dictionaries may have noticed how often the etymological comments there run no further than “dialectal” or “slang,” as though such references meant anything. English contains thousands of words about whose origin absolutely nothing is known, because many of them came from the creative brain of an imaginative person now dead for centuries, or the coinage was triggered by a sound symbolic impulse or a joke (word creation and humor is a most promising topic). Too bad, we are usually unable to reconstruct the evanescent processes that resulted in the birth of a word, short-lived and geographically restricted or durable and used in several counties. 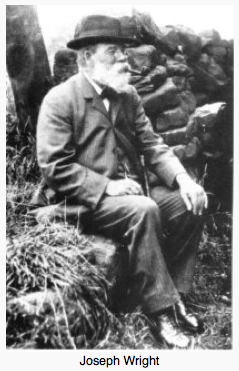 The life of Joseph Wright should serve as an inspiration to anyone who wants to understand the meaning of the phrase self-made man.  A Yorkshire lad (born as the seventh son of a wool weaver), who became fully literate by the age of fifteen, ended up as an Oxford professor of comparative philology, the author of exemplary textbooks of Greek, Gothic, Old and Middle High German, Old and Middle English.  But, as noted, his main achievement was The English Dialect Dictionary (it ends with a book-length supplement on English dialect grammar), a mammoth enterprise, which he, not a rich man, partly financed and which he considered to be his main contribution to linguistics.  He married his former student ([Elizabeth] Mary Lea, 1863-1958), who later co-authored his books on the history of English, though, according to her own statement, she was mainly responsible for collecting data.  In 1932, that is, soon after her husband’s death, she brought out a two-volume book titled The Life of Joseph Wright, 720 pages in all, supplied with a splendid index.  Not only is this book valuable because it is based on the author’s unique knowledge of the subject but also because Mary Wright quoted numerous documents and letters in it.  Even the slightly hagiographic tone of the exposition does not spoil it.  In her book Rustic Speech and Folklore, she also recounts their walks and scholarly pursuits in Yorkshire.  For Joseph Wright, Standard English was a foreign language, and after a stroke he tended to relapse more and more into the dialect of his childhood and youth.  But even much earlier his little son used to tease him when he heard his father pronounce a word like Puck with the vowel of put. Mary Wright reported that the last word of her dying husband was dictionary.  One need not concoct a pseudo-psychological story around this episode.  Joseph Wright was not only aware of Mary’s compiling his biography but he also helped her do the work, and dictionary was his “last will and testament.”  His mind was unaffected by the pneumonia that carried him away, and he wanted to remind his wife that the production of the dictionary should be described as the defining event of his life.

Wright’s career was brilliant, but his life was far from unclouded.  The son and the daughter the couple had died in childhood, and the son’s death was particularly tragic: apparently, he was stung by an insect that had fed on poison, and blood poisoning killed him in a matter of hours.  When he was born, his elder sister, also quite small at the time, called her brother “boy,” and that is why he was known to everybody not as Willie but as Boy.  The girl died of pneumonia several years later.  They never overcame the grief, even though they continued to work with the same dedication.  But living children are more meaningful than dead languages.  Mary Wright did not mention the event that could not have brought unmitigated joy to Joseph.  As a young man, he went to Heidelberg, studied there, learned German very well indeed, and returned home.  Back in England, he wrote the first ever grammar of an English dialect and was invited to teach at Oxford, where the main figure in linguistics was the great Max Müller, a man universally admired at the peak of his career and universally mocked during the last years of his life and after his death.  Both verdicts were unjust.  Wright’s position was that of a lecturer, but later he was promoted to deputy professor.  Finally, Oxford instituted a chair of comparative philology.  At that time, advertisements for such positions could be seen in England more rarely than a blue moon.  There were two contenders: Joseph Wright and Henry Sweet (the latter is the prototype of Henry Higgins).  When Wright applied for deputy professorship, Sweet wrote a warm recommendation letter for him.  Now they were rivals.  The chair went to Wright.  Sweet felt terribly insulted and did not forgive the world for its treatment of him.  As a man of ideas, he was better qualified for the job than Wright’; yet the outcome had two beneficial consequences for scholarship: Sweet, in order to sustain himself, continued to produce his excellent books (published by Oxford University Press!), while Wright may never have completed his dictionary without getting the position.  To think of the choice Oxford had: Joseph Wright or Henry Sweet!  Anyone in present day academia may remember the last search in which he or she participated. 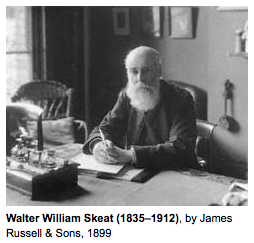 Not everybody knows that we owe the existence of the English Dialect Society to the indefatigable Walter W. Skeat, who did a great lot of editing for it and participated in its meetings in different towns.  His support for Wright’s work was vital.  Today everybody extols the dictionary, but at the end of the nineteenth and the beginning of the twentieth century no one was in a hurry to back it up with grants.  At all times, people send good wishes much more readily than checks (cheques).  The dictionary opens with the following dedication:

“To the Rev. Professor W.W. Skeat, Litt.D. D.C.L., Founder and President of the English Dialect Society, Editor of ‘Chaucer’, ‘Piers Plowman’, and ‘The Bruce’, the unwearied Worker in the varied Field of English Scholarship, to whose patient industry and contagious enthusiasm in connexion with laborious task of accumulating dialect material the possibility of compiling an adequate Dictionary of English Dialects is mainly due.”

Skeat wrote in his testimonial: “After the work had… been at a standstill for at least a couple of years (if I remember rightly), I was so fortunate as to discover in Dr. Wright the only man capable of undertaking the task.”  And now a longer quotation from the biography:

“In the autumn of 1899 Professor (now Sir) Israel Gollancz was raising money for a portrait of Professor Skeat, ‘and also to found a University Prize—a Skeat University Prize for English’.  In a letter thanking Joseph Wright for ‘a generous subscription’ he said, Nov. 27, 1899: ‘S. has done so much for English.  Perhaps he never did a better thing than when he got you to edit the Dialect Dictionary.  He could not have imagined, however, that it would be so glorious an achievement.  God bless you for it!’” (p. 415).

The picture of Joseph Wright in his native Thackley graces the frontispiece of volumes 1 of The Life of Joseph Wright.  The portrait of Skeat is, I think, the one for which Gollancz was raising money in 1899.

On sluts and slatterns