During five and a half years of its existence, this blog has featured the periodical Notes and Queries twice.  Why I am turning to this subject again (now probably for the last time) will become clear at the end of the post.  Notes and Queries appeared on November 3, 1849.  In a series of short notes (naturally, notes) spread over the years 1876-1877, its first editor William John Thoms (1803-1885) told the world how the periodical had become a reality and how almost overnight it had achieved the status of everybody’s favorite.  Twenty-two years later, the journal celebrated its fiftieth anniversary and the editorial board publicized the jubilee in No. 4 of the Ninth Series.  The end of the nineteenth century could look back on many round dates, including the hundred and fiftieth anniversary of Goethe’s birthday.  Festivities marked the centenary (British for centennial) of the Royal Institution, the jubilee of the first municipal free public library in the United Kingdom, the appearance of No. 1000 of Blackwood’s Magazine, and many other events that no longer excite or even interest us but whose importance for the culture of the age gone by cannot be overestimated.  Among so many memorable dates, the birthday of Notes and Queries, at that time a weekly, was not lost.

William Thoms was born nine years before Dickens and outlived him by fifteen years.  He witnessed Dickens’s rise to fame, and since hardly any issue of NQ did without some reference to Dickens’s books, it does not come as a surprise that on the advice of “a learned lady” Thoms chose a motto to his periodical from Dombey and Son, a brand-new novel in 1849: “When found, make a note of.”  This was the favorite phrase of Captain Cuttle, a kind-hearted man with an iron hook in place of an amputated right hand.  Correspondents to NQ referred to the captain’s advice innumerable times (times out of number, as they used to say in those days): they were so happy to find something of worthwhile and make a note of it.  The title of the periodical contributed a good deal to its initial popularity, and yet, as Thoms recalled: “One of whom I had the deepest regard, and in whose judgment I had great reliance, protested against it, and wrote to say that he thought the idea on which the paper was founded was so good that he was about to propose to join me in the undertaking, and bring in any capital that might be required, as well as his long experience in journalism, but that the title I had given it would be fatal to its success.”  There is nothing like having devoted friends.

Notes and Queries, which bore the subtitle “A Medium of Intercommunication for Literary Men, General Readers, etc.,”   was launched as a forum where people could ask and answer question, share ideas, and inform the world about their thoughts on literature, “popular antiquities” (that term was replaced by folklore, Thoms’s coinage that soon became a household word in most European languages), history, numismatics, engineering, and practically everything.  Contributors from all over the British Isles and abroad sent letters to the editor.  Prime ministers, admirals, world famous scholars, country squires pursuing their projects, and hundreds of interested readers, with—as always—many an ambitious whippersnapper eager to see his name in print, were among the correspondents.

In its pages, Walter W. Skeat berated his opponents for their ignorance and their inability to be like him; Frank Chance occasionally brought Skeat down a peg or two; James A. H. Murray asked questions about the words he was editing for the dictionary that later acquired the name OED and warned the respondents not to waste time on conjectures but keep to the point, for he needed facts, and only facts (there was something of Mr. Thomas Gradgrind in this almost supernaturally gifted and superhumanly diligent man); Joseph Wright, the editor of the English Dialect Dictionary, and A. L. Mayhew, the treasurer of the Dialectal Society, wondered whether a certain obscure word was still current in some (any) living dialect; countless people inquired about the authors of familiar quotations or the meaning of a half-obliterated inscription; “old boys,” in whom Latin and Greek were beaten with remarkable success at Eton and Oxford, argued about a line in classical authors, and indeed, there was no subject that did not turn up in NQ.  Some notes and especially queries were a paragraph, even one line, long, but every now and then regular articles were published.  Every full volume ended with an index, which made NQ a doubly valuable source of knowledge.  At least half of the contributors appeared in NQ under pseudonyms and initials.  Mr. Alpha and Mr. Omega were there, along with a gentleman encoded as *** and a person who in a display of sham modesty called himself Zero.  Not even Thoms and the subsequent editors knew the identities of some of them.

I will quote Joseph Knight, the fourth editor of NQ, who “presided” over the jubilee in 1899:

“A staff of brilliant contributors keeps a constant and sometimes overflowing and unmanageable supply of matter, with which I have only so far to deal as to prevent frequent and needless repetition. These contributors consist of erudite and, in a sense, leisured scholars…my only responsibility is that of the peacemaker who tries to prevent discussion passing the bounds of courtesy and employing terms that may rankle, or words that may gall—a task, on the whole lighter than might be imagined.”

Alas, terms that rankle and words that gall were frequent in the pages of NQ, and one often wonders at the abrasive, even virulent statements of some disgruntled busy and leisured scholars.  NQ retained its character into the twentieth century but gradually turned into an ordinary journal devoted to language and literature.  Only the format of the contributions is as it used to be: the articles are still short.  Thoms and his successors published everything they received, except that thy tried to avoid “needless repetition,” and the magazine owed its allure to its omnivorous nature.

So much for the jubilee.  I must now say something about the reason for my jubilation.  When more than twenty years ago I embarked on compiling a bibliography of English etymology, using both scholarly and popular sources, the first magazine I offered to my first volunteer was what Thoms called “dear old Notes and Queries.”  Since that time several people have continued with this labor of love.  I asked them to ignore notes on usage, spelling, place and proper names, pronunciation, the meaning of this or that word in Chaucer and Shakespeare, and the like, but everything that dealt with word origins went into the database.  After some soul searching I also decided to stay away from the origin of idioms, and I am afraid few people realize how many curious proverbs and catch phrases fill the pages of NQ.  Perhaps one day someone will put together a comprehensive index of that material.  Following my volunteers, I have looked through the entire run of Notes and Queries, and the more I read, the more I liked it.  Last week the work of screening this periodical came to an end: there are no more volumes to look through, and I am not sure whether I should rejoice or weep.  The feeling is akin to sending a child into the wide world: the boy is now a man, but you will never see him again.

My database contains over 22,500 titles.  Approximately one third of them are from NQ.  No bibliography has paid so much attention to those notes (only a tiny fraction of them was once noticed by the editors of the German philological journal Anglia).  Both Thoms and Knight mentioned the names of their most dedicated contributors.  I see no reason why I should not do the same.  My first volunteer was Johanna Berg (she is married now, but I only remember her maiden name); she was wonderful.  Yet the one assistant to whom this work owes more than to anybody else is Mr. Treffle Daniels.  I cannot resist the temptation to mention Dickens again and use a Pickwickian phrase.  Tref kept eating his way through the bibliography with “indefatigable assiduity,” and during the last six years his main project has been Notes and Queries.

At one time, Notes and Queries was a great center of intellectual life, a magnet that attracted the brightest minds.  It spawned numerous imitations in Britain and the United States (and we have followed their course too).  I am happy that my team has done justice to the role this periodical played in the history of English etymology.

Here is a painting of Captain Edward Cuttle, depicted with Solomon Gill (the dejected maker of navigation instruments) and Solomon’s nephew Walter Gay, who will one day marry Florence Dombey. 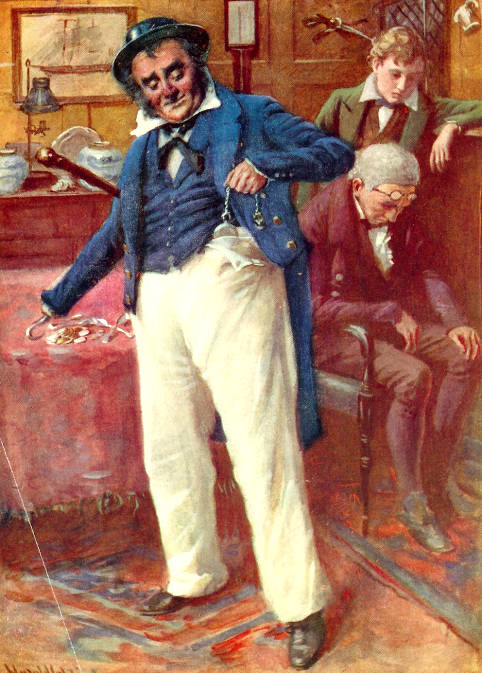