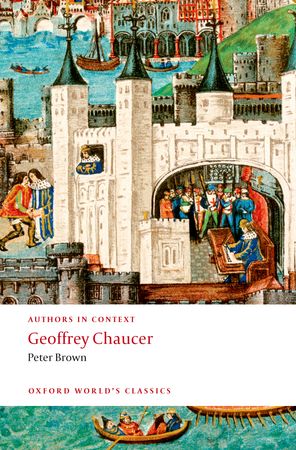 If Prince William and Catherine Middleton took to heart the wedding sermon delivered in Westminster Abbey by Richard Chartres, bishop of London, then Chaucer is on the royal reading list. The good bishop quoted two lines from the Franklin’s Tale to emphasize that successful relationships should be based on ‘space and freedom’ rather than coercion: ‘Whan maistrie [mastery] comth, the god of Love anon / Beteth his wynges, and farewell, he is gon’.

Were they to look up the lines or, better, read the entire tale, Will and Kate would find that Chaucer informed much of the good bishop’s thinking on matters marital. His quotation is taken from an extended comment by the Franklin on the union of the high-born lady Dorigen and the worthy knight Arveragus. In wooing his beloved, Arveragus adopts the traditional role of supplicant and servant. Dorigen is impressed by his persistence and integrity and agrees to the match. At this point, it would be entirely in keeping with medieval practice for Arveragus to assert lordship or maistrye over his new wife. Instead, he does a surprising thing: he relinquishes his rights, and offers Dorigen as much freedom within the marriage as she previously enjoyed outside it – an offer she gratefully accepts, vowing to be true to him. Cue the Franklin’s approving comment.

A week after our own royal marriage, in his weekly literary column in The Independent, Boyd Tonkin commented on the ‘true radicalism’ of the bishop’s choice of text. It stresses the importance of gender equality within marriage – an ideal that the Windsors are hardly noted for embracing. Not that the arrangements made by Chaucer’s couple are without tribulations. Arveragus returns from overseas conquest to find his wife in a state of distress. She has promised to become the mistress of a young squire, Aurelius, because he has removed (by magical agency) some grisly rocks that seemed to threaten the safe return of her beloved husband. Dorigen has overstepped the bounds of her marital freedom which, she now finds, has its limits. Yet, since he believes in the sanctity of promises, Arveragus insists that Dorigen keep hers to the squire, even though to do so will leave his reputation in tatters. At this point Arveragus breaks down and it seems as though the marriage will end in tears. On her way to meet Aurelius for their tryst, Dorigen encounters him by chance in a busy market-place and tells him of her sorrowful situation. The squire is cut to the quick, recognizes his own behaviour as churlish, and is deeply impressed by Arveragus’s unselfish behaviour. He emulates it by freeing Dorigen of her obligation. It feels as though Dorigen and Aurelius have grown up and become happier, more independent people.

So when, elsewhere in his sermon, the bishop dwelt on the topics of generosity and personal transformation, his ideas connect with those of the Franklin’s Tale. Chaucer was an appropriate point of reference for other reasons, too. The wedding took place in April, the Chaucerian month par excellence, and Westminster Abbey itself resonates with associations. Chaucer was buried there in 1400 and his present tomb (created in the sixteenth century) forms the nucleus of Poets’ Corner. His interment at Westminster was not a mark of poetic pre-eminence but instead recognition of services to the Crown. One royal appointment was that of Clerk of the Works at Westminster. Although he moved in royal circles, married well (his wife’s sister was married to a royal prince, John of Gaunt), and acquired a measure of gentility by becoming a king’s squire, Chaucer’s origins were those of a commoner. He was not ‘free born’ but the son of a wine merchant who had become deputy chief butler to Edward III.

Chaucer’s status, in the world of royalty but not of it, put him in an unusually advantageous position. He could observe, and comment upon, the drives that animated his society; he had few inhibitions about challenging the status quo in fictive form; and was aware of how individual experience connected with larger issues. So when, at the end of the Franklin’s tale, the narrator asks his audience to evaluate which of the protagonists is most ‘free’, the question has wide implications. One answer is Dorigen, because she is of the highest social status. Another is Arveragus, who gave her gender equality and was prepared to suffer the consequences. A third is Aurelius, transformed from self-indulgent adolescent to generous and compassionate adult. A final answer is the magician-clerk of Orleans who cancels the huge debt owed him by Aurelius for ‘removing’ the rocks. Although unlike the others in not being from the ranks of the gentility, the clerk also acts freely. The lesson would not have been lost on Chaucer’s audience. ‘Freedom!’, with all its ethical and social implications, was a rallying cry of the peasant rebels of 1381 who, tired of a succession of poll taxes and the depredations of a long war with France, marched on London and ransacked it. One of their leaders, the preacher John Ball, had popularized the refrain ‘When Adam delved and Eve span / Who was then the gentilman?’ Under his courtly veneer, Chaucer was asking similarly awkward questions.

Peter Brown is Professor of Medieval English Literature at the University of Kent. He is the author of Geoffrey Chaucer: Authors in Context.