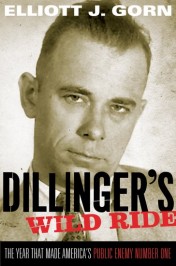 Dillinger’s Wild Ride: The Year That Made America’s Public Enemy Number One

I’m reasonably sure that most American boys who reached adolescence in the 1960s knew about Dillinger’s dick. It was enormous, preserved in formaldehyde at the Smithsonian Institution. Friends of mine who grew up on the east coast told me years later that on high school trips to Washington, the boys would spread out and look for it. Some even claimed that they saw it. A less well-known version of the story insisted that no, it wasn’t in the Smithsonian, but at FBI headquarters, that for years it rested in a jar on J. Edgar Hoover’s desk. Others said it actually was nearby at the Army Medical Museum. Anyway, boys identified with the dead gunman and his parts—everyone knew what you meant when you referred to “my Dillinger.”

As it turns out, the Smithsonian keeps a file of letters from citizens enquiring about the legendary dingus. People write in trying to resolve arguments or settle bets or finish term papers on human anatomy. The Smithsonian has a formal letter they send out routinely, denying any knowledge of Dillinger’s missing member.

Even before the Smithsonian legend, Dillinger’s manhood was part of oral tradition. Back in Indiana, the outlaw’s home state, some said that he was so large that he was not a great lover; he’d lose consciousness when aroused because so much blood drained toward his groin. Others claimed that the Woman in Red betrayed him that July night in Chicago in 1934 when the feds gunned him down because Dillinger was her lover, and she just couldn’t take it anymore.

The story of Dillinger’s legendary proportions originated with a morgue photo that circulated just after he died. There he is on a gurney, officials from the Cook County Coroner’s office gathered around, and the sheet covering him rising in a conspicuous tent at least a foot above his body, roughly around his loins, though truth be told, it looks more like where his naval should be. Probably his arm, rigid in rigor mortis, was under the sheet. No matter. It looked like he died with an enormous hard-on. Newspaper editors quickly realized how readers interpreted the photo, withdrew it, retouched it, then reprinted it in later wire-service editions, with the sheet nice and flat against the dead man’s body.

But the damage was done. Soon, Dillinger’s likeness appeared in crude pornography. Mostly, however, rumors of his enormous manhood persisted in oral tradition until roughly thirty years after his death, when it congealed into the urban belief tale centered on the Smithsonian.

In a literal sense, the story is almost certainly not true. Dillinger’s autopsy reported nothing unusual about the man. Government workers just look perplexed when asked about the legendary object. No one has ever produced substantial proof that the famed member exists.

So what does the story mean? It is a trope, a metaphor, a symbol of the whole Dillinger saga. He must have had a big one. In the midst of the Great Depression, with hunger and hopelessness everywhere, Dillinger went out and took what he wanted. He robbed from banks, which many Americans assumed had robbed them. Guns blazing, he escaped the feds time after time, and humiliated local authorities. He broke out of prisons, once famously with a wooden gun.

On the side, he had multiple liaisons with good-looking women, and they aided him in his exploits. Even as he walked out of Chicago’s Biograph Theater to his death, newspapers reported, he had a woman on each arm. The Dillinger story was one of America’s great noir moments of sex and violence, freedom and betrayal.

Americans are fascinated with rebels and renegades. We love stories about escape from the hum-drum of daily life. In fantasy, anyway, we admire those who walk away from crushing boredom and killing routine. We make heroes of anyone bold enough to live on the open road. We love our outlaws, men who oppose the over-civilized life with virile action, and who dispense rough justice.

But we also take care not to get too close, and certainly not to emulate them. Even as it makes Dillinger larger than life, the Smithsonian story is also a cautionary tale. It warns that the price of living so free and defiant is death, and in the legend, castration.

Metaphorically, it certainly was true what they said about John Dillinger. True because he lived his wild year hard and died young. True because he did it with style, coolness, and élan. And true because, in reality and in legend, he paid for it.

Elliott J. Gorn is Professor of History and American Studies at Brown University. He is the author of Dillinger’s Wild Ride: The Year That Made America’s Public Enemy Number One, The Manly Art: Bare-Knuckle Prize Fighting in America, and Mother Jones: The Most Dangerous Woman in America, among other books. Read his article "John Dillinger Goes to the Movies".