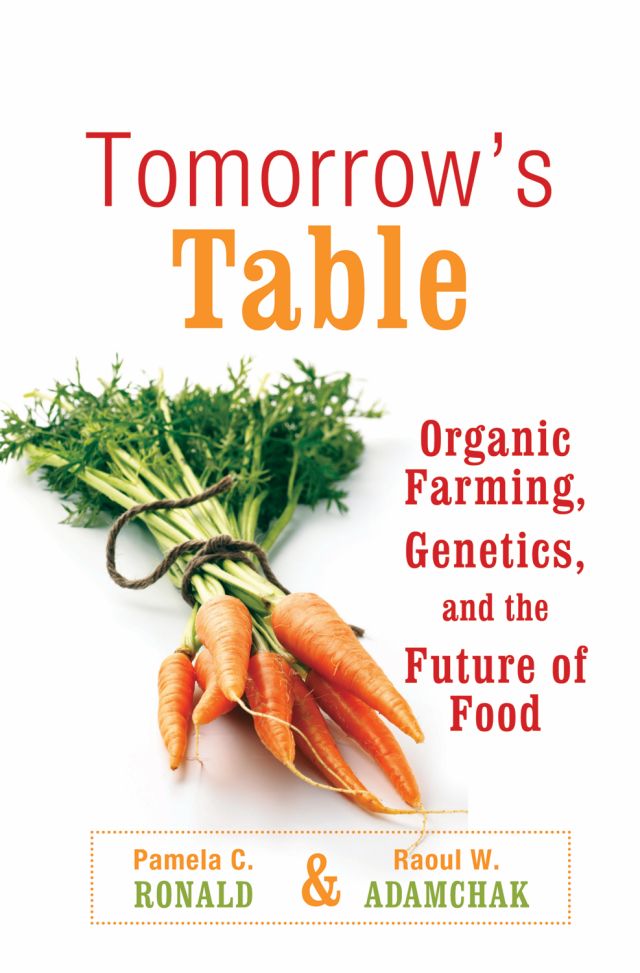 Yesterday we posted part one in our dialogue between Robert Paarlberg (who recently published Starved For Science) and Pamela Ronald (author of Tomorrow’s Table). These two experts will be debating all week how to best ensure a safe food supply with the least amount of damage to the environment. This is the second part of the series, so be sure to come back and check out part three tomorrow.

Thanks for your careful note, which helps me understand some important technical points. I like your reminder that cover crops have multiple roles, and also your reference to the high cost of synthetic fertilizers given today’s much market price for natural gas. These are solid arguments to support some techniques employed by organic farmers.

I am also glad that you endorse using more science, not less, to address productivity and sustainability issues in agriculture. I am particularly attracted to your advocacy for a new science of “biotic controls” for crop pests. One of my earliest and strongest impressions of what this kind of science can deliver came during a visit I made to Benin, in Africa, in the early 1990s, where I saw first hand how the introduction of a tiny parasitic wasp from Brazil had helped bring under control damage to cassava plants from a mealy bug. The mealy bug had earlier been introduced (along with the cassava) from Brazil, but without the wasp which was its natural biological control.

But let me challenge you, at this point, with a less technical matter. On the question of the environmental implications of science-based productivity in farming, I have recently come across the views of James Lovelock, who was the independent scientist who first developed Gaia theory in 1972. Lovelock has recently made a bold and daring argument. He has asserted than an adequate protection of nature in some places may require a more complete engineering or domination of nature somewhere else. Lovelock has even imagined an ideal landscape for human habitation as divided into three parts: one-third would be given over to human residential and industrial use, and one-third to highly intensive farming, which would allow (by his calculation) the final one-third to be left to evolve entirely free of any human interference. This is an extreme and fanciful vision, but it is founded on an important insight about farming: less intensive, low-input models of agriculture that are designed to imitate nature would – just like nature itself – produce too little human food per hectare, thus requiring the use of much more land in farming, encroaching on the natural environment.

What do you think of this vision?

Thanks again for your generous engagement in this stimulating dialogue.

James Lovelock presents an interesting and practical model for human utilization of natural resources. In a sense, this is somewhat how these resources are now being managed, although the proportions likely differ from what Lovelock envisioned. I completely agree that less intensive, low-input models of agriculture produce too little human food per hectare. This is what you have in Africa, right? With dire consequences. If we use this approach in the US, we would need to clear vast amounts of land for farming which would increase global warming.

Although Sir Albert Howard, one of the founders of the organic movement did believe that farms should imitate nature world (a very fundamentalist view), few organic farmers in the developed world now use this approach.

Instead, the most successful organic farms are science based and highly intensive. The difference from many conventional farms is that there is less fertilizer runoff and pesticide use, because alternative approaches are used. In ideal farming conditions, yields from organic farms are similar to those of conventional farms. However, when diseases or environmental stress strike, organic farmers do not always have adequate tools available. For example, because there was no tool to combat papaya ringspot virus that infected papaya orchards in Hawaii, when the disease hit, yields of both conventional and organic orchards plummeted. Once the fields were replanted with GE papaya that is resistant to the disease, the productivity rapidly rebounded.

So what I advocate is intensive farming using the most ecologically responsible approaches. In our view this would include many organic production practices and GE crops

I hope this clarifies. Thanks for the interesting question!

Robert Paarlberg is the Betty F. Johnson Professor of Political Science at Wellesley College. His most recent book is Starved For Science: How Biotechnology is Being Kept Out of Africa (Harvard University Press), explains why poor African farmers are denied access to productive technologies, particularly genetically engineered seeds with improved resistance to insects and drought.

Pamela C. Ronald is a Professor in the Department of Plant Pathology at the University of California, Davis. Her laboratory has genetically engineered rice for resistance to diseases and flooding. She is an elected Fellow of the American Association for the Advancement of Science. Her most recent book, written with Raoul W. Adamchak, is Tomorrow’s Table: Organic Farming, genetics, and the Future of Food, which argues that a judicious blend of two important strands of agriculture–genetic engineering and organic farming–is key to helping feed the world’s growing population in an ecologically balanced manner.