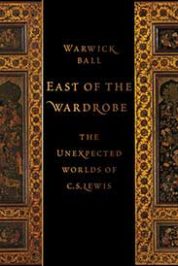 East of the Wardrobe: The Unexpected Worlds of C. S. Lewis

The release in 2021 of Norman Stone’s biopic movie, The Most Reluctant Convert: The Untold Story of C.S. Lewis, demonstrates how the interest in Lewis and his creation of Narnia shows no sign of abating. In the movie’s publicity, it depicts how “An elder C.S. Lewis looks back on his remarkable journey from hard-boiled atheist to the most renowned Christian writer of the past century. . . . Beautifully filmed in and around Oxford, this engaging biopic follows the creator of The Chronicles of Narnia from the tragic death of his mother when he was just nine years old, through his strained relationship with his father, to the nightmare of the trenches of World War I to Oxford University, where friends like J.R.R. Tolkien challenge his unbelief.” The film is actually narrated direct to camera by the actor playing Lewis while the events of his life are played out behind him.

Lewis’ creation of Narnia is also currently enjoying a new lease of life as a London West End stage musical of The Lion, the Witch and the Wardrobe, the latest of several stage adaptations. The production’s publicity invites audiences to “Step through the wardrobe into the magical kingdom of Narnia” for the staging of a book that has been “Voted the nation’s favourite novel.” London underground advertisements for the stage production carry the tag line “All aboard for a bewitching return to Narnia,” and the theatre too invites audiences to “Step Through The Wardrobe – At Gillian Lynne Theatre.’

There is little doubt that “Narnia” has effectively entered the English language and that references to a “wardrobe” or “wardrobe door” have been given additional meanings by C. S. Lewis: any reference to it requires no explanation simply because everyone knows. “Narnia” is an accepted word in Microsoft’s spellcheck, and when finalising my book on 11 February 2021, the BBC Radio news, in referring to unusual temperatures as low as minus 23 degrees Celsius in the Scottish Highlands, described the snow in Braemar as “Narnian.” Even in the realm of current affairs, references to “Narnia” frequently occur: for example at the time of going to press in November 2021, the journalist Paul Goodman referred to “the resumption of normal politics, as Covid’s Narnian winter thaws” on the assumption that most will understand the reference.[1] Recently, when watching one of those house makeover/renovation programmes on television with my son and daughter-in-law (who were themselves at the time renovating a property), the presenter came to a door in the wall and announced “Da-daa: a Narnia moment!” and opened the door into …. a home office. On collecting some printing from a converted stables at a stately home in Selkirk recently, the printer told us to cross the courtyard and open that door “into Narnia,” which we duly did: into the manicured grand landscape of the grounds of the stately home.

Sculptures of Aslan, the White Witch and Mr Tumnus have replaced medieval sculptures at a twelfth-century church in Yorkshire and the characters are commemorated in the Story Museum in Oxford where the visitor is invited to enter “The Portal” to explore the museum. The novelist Francis Spufford has written a new Narnia book entitled The Stone Table that is set before The Lion, the Witch and the Wardrobe (although publication is not allowed for copyright reasons) and another novelist, Piers Torday, has written a novel entitled The Lost Magician loosely based on The Lion, The Witch And The Wardrobe where four children at the end of the Second World War enter an enchanted world through a mysterious magic door; the book is openly described as “an ode to the world of Narnia.” Lewis himself is commemorated by a life-sized bronze statue (of a poor likeness of himself opening a wardrobe door) and a city square named after him in Belfast, as well as by a stage play of his relationship with Joy Gresham which was made into a movie, Shadowlands.

The first three books of the Chronicles of Narnia have famously been made into films by Disney, released between 2005 and 2010; a fourth was planned but never materialised. In 2018 Netflix acquired the rights to the entire series, planning new films and/or television series of all seven books of C. S. Lewis world. Narnia, as Lewis himself rightly predicted as far back as 1956 in the final novel, just keeps going “farther up and farther in.”

Warwick Ball is an archaeologist who has carried out excavations, architectural studies, and monumental restoration in Afghanistan, Iran, Iraq, Jordan, Libya, and Ethiopia. His previous books include Syria: An Architectural and Historical Guide, The Monuments of Afghanistan, Archaeological Gazetteer of Afghanistan (Oxford 2019), The Archaeology of Afghanistan, The Eurasian Steppe: People, Movement, Ideas, and Rome in the East: The Transformation of an Empire, winner of the James Henry Breasted History Prize.