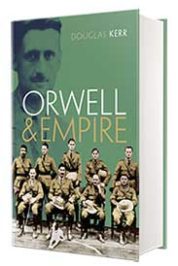 In the mid-1920s, in Burma, a young officer of the Imperial Police was reading in an Indian newspaper an instalment of the autobiography of the most famous man in India. Years later, he remembered the moment and his mixed feelings:

At about the time when the autobiography first appeared I remember reading its opening chapters in the ill-printed pages of some Indian newspaper. They made a good impression on me, which Gandhi himself, at that time, did not.

It is no surprise that Gandhi himself was not popular with British officials in the Raj. He, and the Congress Party with which he was associated, had for years been a thorn in the side of the imperial authorities, and were in the vanguard of the movement to force the British to quit India. In British Burma, nationalists looked to India for inspiration and sometimes support in their own struggle. Every imperial policeman in Burma was aware of Gandhi as the figurehead of this rebellious spirit, as well as a wily political operator who kept finding new ways to get under the skin of the government of British India and its disciplinary forces. If Gandhi did not make a good impression on the young policeman, whose name was Eric Blair, that hostile perception was maintained, for the most part, throughout the subsequent career of George Orwell, the writer he became. Yet on the face of it, this was surprising.

Gandhi and Orwell were implacable enemies of the injustice of imperial rule and worked to change the minds of those who sustained it. This campaign came to a climax with the end of British rule in India in 1947, which both lived to see. So what was it that prevented Orwell from seeing in Gandhi a kind of ally, a comrade in arms, even a hero? Through his career, in which he wrote a good deal about Gandhi, he expresses suspicion, hostility, irritation, “a sort of aesthetic distaste,” and at best a grudging respect for the older man. Why?

The socialist anti-imperialist George Orwell did not cease (though he tried) to be an Anglo-Indian in many of his instincts and responses. Particularly when war came in 1939, he rediscovered in himself what he called “the spiritual need for patriotism and the military virtues.” Later, in 1942, when Britain and its empire were beleaguered, with victorious Japanese forces sweeping through Burma to the gates of India, he was exasperated that Gandhi and his allies would not co-operate in the defence of the country, instead demanding that the British quit India without delay. Orwell believed this would be tantamount to handing India over to the Emperor of Japan. The British immediately locked up Gandhi and the Congress leaders, setting back by several years the possibility of co-operation over India’s future.

Orwell also thought that, in the 1940s, a pacifism like Gandhi’s was culpably naïve. Civil disobedience was all very well against the British in India, “an old-fashioned and rather shaky despotism,” but would be a hopeless tactic against a ruthless dictator. What action would Gandhi have recommended for the European Jews? The answer was on the record. “The Jews should have offered themselves to the butcher’s knife. They should have thrown themselves into the sea from cliffs.” This, in Gandhi’s view, would have aroused the world to the evils of Hitler’s violence.

Orwell said he remembered that, during his time in the Indian police, many Englishmen thought Gandhi was actually useful to the Raj. His advocacy of non-violence, they argued, always worked against translating anti-British resistance into any effective action, and meanwhile he “alienated the British public by his extremism and aided the British Government by his moderation.” Besides, Orwell found his religious views suspect, and in the end coercive. Gandhi was like Tolstoy, he grumbled, a utopianist whose basic aims were anti-human and reactionary.

Yet at the end of the day, he had to admit Gandhi was more responsible than anyone else for bringing about the end of British rule in India, the first and crucial step in the relatively peaceful dismantling of the empire. Orwell the anti-imperialist had desired this above all, and knew it could only be brought about by the action of imperial subjects, while Orwell the Anglo-Indian had never quite believed that the subject peoples themselves could ever make it happen. Even after the death of the Mahatma in 1948, Orwell couldn’t really make up his mind. In his last essay on Gandhi, written just a year before his own death in January 1950, he was still confessing that Gandhi inspired in him “a sort of aesthetic distaste”—and yet, “compared with the other leading political figures of our time, how clean a smell he has managed to leave behind!”

His first book was about the war poet Wilfred Owen and much of his later work studies English literature about the East in colonial and postcolonial times. His most recent book is Conan Doyle: Writing, Profession, and Practice (OUP, 2013) and he is general editor of the Edinburgh Edition of the Works of Conan Doyle.