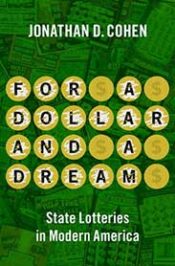 For a Dollar and a Dream: State Lotteries in Modern America

This past summer, millions of Americans were transfixed by the prospect of becoming billionaires. After weeks with no winner, the jackpot for the multi-state lottery game Mega Millions rose to $1.3 billion before being won by an as-yet-unnamed gambler who purchased the winning ticket at a Speedway gas station in Des Plaines, Illinois. Or, more specifically, at the convenience store portion of the gas station, where customers can purchase gas, food, drinks, cigarettes, and, of course, lottery tickets.

The first wave of state lotteries spread over the Northeast and Rust Belt in the 1960s and 1970s, where states initially strove for respectability. Tickets were sold in a variety of retail businesses and nonprofit organizations, from barbershops to union halls. This strategy was born of necessity: states wanted to meet potential players where they already gathered and to legitimize a consumer product that had long been underground and associated with organized crime.

The rise of the convenience store changed the game for state lottery commissions. In 1959, there were just 900 convenience stores across the entire United States. By 1977 there were 27,000 and in 1990 there were 71,000. A number of factors contributed to the quick rise of quick shopping. Convenience stores opened earlier and closed later than grocery stores. As more women entered the workforce, households compensated by making fewer grocery trips and picking up goods at a corner market, even if the prices were somewhat higher.

Another factor was the consolidation of the grocery store industry. In Chicago, the number of grocery stores declined from over 13,000 in 1954 to 3,600 by 1987. A result was entire communities with little access to healthy food, known as “food deserts.” For many, especially in minority urban neighborhoods, the choice to patronize a newly-opened convenience store was a last resort born of financial and logistical necessity.

The spread of convenience stores was especially significant for state gambling officials because these retailers shared a primary customer base with lotteries. Convenience store clientele consisted primarily of blue-collar men, many of whom were drawn to the stores’ prepared foods, their expanded operating hours, their large number of locations, and their sale of alcohol and tobacco. Nationwide, as many as 70% of 7-Eleven’s customers in the late 1970s were men. Similarly, studies show that men are more likely than women to play the lottery, and, on average, they gamble more.

For their part, retailers were more than happy to add lottery tickets to their inventory. Stores receive a cut on each ticket sold, generally around 5%. While the margin on lottery tickets is lower than for most other products, and though periods of lottomania created havoc at overwhelmed ticket counters, lottery players typically purchased other goods when they bought their tickets.

As a result, in some states, convenience store chains helped lobby for the passage of lottery legislation. In Virginia, 7-Eleven provided 22% of the funding for the state’s 1987 lottery referendum.

The profits explain why. In Virginia, 7-Eleven accounted for over 30% of total lottery sales in 1991, amounting to over $14 million in commission profits. In the mid-1990s, convenience stores in the nation’s 37 lottery states sold $18 billion worth of lottery tickets. By contrast, tobacco sales at convenience stores across all 50 states totaled $17 billion.

State lotteries, then, might not be as big as they are without convenience stores, and convenience stores owe much of their continued profitability to the enduring popularity of lottery tickets. While the nation waits with bated breath to see who—if anyone—will come forward with the winning ticket, all we know about this lucky person is that they visited an Illinois Speedway in late July. Their patronage of this outlet represents another reminder of how both lottery tickets and convenience shopping have only in the last few decades become ubiquitous parts of the American commercial landscape.

Jonathan D. Cohen is a program officer at the American Academy of Arts & Sciences.

He is the co-editor of All In: The Spread of Gambling in Twentieth-Century United States and Long Walk Home: Reflections on Bruce Springsteen. His most recent book, For a Dollar and a Dream: State Lotteries in Modern America is available now from Oxford University Press. He received his PhD in history from the University of Virginia.

Listen to Jonathan discuss the origins of the state lottery system in America in Episode 31 of The Oxford Side Comment podcast.