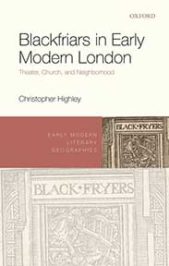 When we imagine the built environment of Early Modern London, we tend to think of the hundred or so church buildings that dotted the City as free-standing Anglo-Norman structures set within walled churchyards. But as John Schofield has demonstrated, “the majority were small, on constricted sites and often partially hidden from the street.” The church of St Anne’s Blackfriars is a good example of how actual churches might fall short of an imaginary “norm.”

St Anne’s only became a parish once Henry VIII closed the friary in 1535. Before then, non-religious residents of the ecclesiastical precinct had worshipped in part of the friars’ own conventual church. When that church was either demolished or turned into a private home, parishioners needed a new place of worship. They eventually found one in the upper story of the former chapter house. We know from contemporary sources that this “little church or chappell up stayres,” as described by law student John Manningham in 1602, was originally 50 ft in length by 30 ft in width. The church building was enlarged several times in the next century, until it measured approximately 86 ft from north to south, and 54 ft from east to west. Unlike most conventional Anglo-Norman churches in London and elsewhere, then, St Anne’s north-south axis was significantly longer than its east-west.

“The experience of churchgoing at St Anne’s was undoubtedly shaped by the unconventional layout of the place of worship, but in ways that are now hard to recover.”

This fact was clear to critics of the Puritan clergy who dominated the Blackfriars pulpit for years. One wit observed of St Anne’s that the “Church stands North and South, / And East and West the Preachers mouth.” This odd joke about the alignment of the preacher’s mouth implies that he stood facing the congregation with his back to either the north or south wall. Whether we are to picture him standing in his pulpit or in front of the communion table is unclear. The fact that parishioner Gideon Delaune was granted the “second pew to the pulpit southward” in 1618 might indicate that the pulpit was in the north of the church. It certainly implies that the pulpit—rather than the altar or communion table—was the liturgical center. Such an arrangement means that St Anne’s did not conform to the traditions of Anglican sacred space.

The experience of churchgoing at St Anne’s was undoubtedly shaped by the unconventional layout of the place of worship, but in ways that are now hard to recover. Embodied religious experience unfolds in particular spaces and on particular occasions. St Anne’s parishioners may have considered the unorthodox nature of their worship space an unhappy accident or may just as readily have imbued it with symbolic value, making it a focus of their collective identity.

Lived religion in St Anne’s was shaped not only by the interior layout of the church, but also by other buildings and institutions close by. St Anne’s churchgoers were always mindful of the nearby Blackfriars playhouse, which residents had feared before it opened would disturb divine service with the players’ drums and trumpets, even though the playhouse was to be fully enclosed in a separate part of the old friary. The churchgoers would also have been mindful of the space beneath their feet, for when they had added a new western aisle to their church, they also built “a faire Ware-house” underneath for Sir Jermone Bowes who operated a glasshouse and furnace in an adjacent vault. One wonders whether the intense heat and pungent smells ever infiltrated the church?

The warehouse under St Anne’s church was one of many examples of how secular spaces could press in on places of worship. Churches might share walls with shops or have only the narrowest of passages between them and domestic dwellings. Several churches rented out their vaults, crypts, and cellars for secular use. For instance, St Mary Colechurch on Cheapside, which like St Anne’s was entered via a staircase, was built over a crypt occupied by the Mitre Tavern. The Mitre also had rooms above the church. Could churchgoers hear the carousing customers above? We do know that near St Anne’s, where at least one tavern commanded a view of the church porch, proprietors were warned not to “carry on their trade in time of divine service.”

With shops, homes, and halls often surrounding church buildings, Londoners must have found it difficult to think of and treat sacred space as separate from and untouched by the secular realm. Inevitably, the sights, sounds, and smells of quotidian reality pressed in upon what we tend to think of as the secluded stillness of religious space. The St Anne’s preacher Stephen Egerton urged his congregation to think of their church as a “holy sanctuary.” But in many cases, this sense of the sacred as a protected sphere may have been more a wish than a reality.

Christopher Highley is a Professor of English at Ohio State University. He is the author of Catholics Writing the Nation in Early Modern Britain and Ireland (OUP, 2008) and Blackfriars in Early Modern London: Theater, Church, and Neighborhood (OUP, 2022).