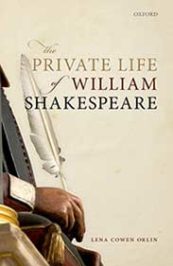 When we picture Shakespeare, we usually think of the “Droeshout portrait,” the engraved frontispiece for the volume that collected all “Mr William Shakespeare’s Comedies, Histories, and Tragedies.” But the First Folio, as it is known, was published in 1623, seven years after Shakespeare’s death, and there is little evidence that the engraver, Martin Droeshout, ever saw Shakespeare. We console ourselves that people who did know Shakespeare seem to have accepted the likeness (Ben Jonson said Droeshout had “hit” it).

The same argument has been applied to the demi-figure sculpture of Shakespeare on his funerary monument in Holy Trinity Church in Stratford-upon-Avon: it must have been approved by his survivors. Now, however, it is possible to conclude that the monument was created during his lifetime, as one-third of early modern monuments were, and was commissioned by Shakespeare himself from a sculptor he met in person.

Two years before Shakespeare died in 1616, his friend John Combe was buried in Holy Trinity. In his will, Combe directed that “a convenient tomb of the value of threescore pounds . . . be set over me . . . within one year after my decease.” According to the Warwickshire antiquarian Sir William Dugdale, the man who made Combe’s monument was named Johnson. Dugdale thought “Gerard” Johnson, but the more likely artisan was Gerard’s son Nicholas. It was Johnson family practice to establish residence for a week or two to oversee the “placing” of their larger commissions, and the Combe monument featured a life-size effigy laid on a marble tomb chest and sheltered by a great arched canopy, the whole structure anchored to a chancel wall. Shakespeare is said to have authored two verse epitaphs for Combe, a satirical one for Combe’s own enjoyment in his last years and a kinder one after Combe died. By then retired to Stratford, he would almost certainly have visited Nicholas Johnson at work. This may also have been when he commissioned his own monument and when Johnson saw his next subject in the flesh.

We once believed that Shakespeare’s monument was installed around 1623, the date of the First Folio, but newer evidence suggests that the antiquarian John Weever saw it in place as early as 1617 or 1618. Notably, the memorial inscription was likely painted in two stages. Shakespeare’s date of death and his age at death appear to have been added to a poetic tribute that was probably inscribed before his death. Unlike Combe, Shakespeare left no directions in his will; if the monument had been completed in early 1616, there was no need.

At the time, three-dimensional figural representations were generally of three types: effigies lying recumbent in death and looking upward towards heaven (like Combe), figures kneeling in preparation for death and looking inward or towards prayer books, and half-height figures sheltered in architectural niches and looking outward towards their viewers. Shakespeare’s was of the last type, which had a limited vogue between about 1610 and 1640. Nicholas Johnson is known to have produced at least one other example that survives in London. Radically, it made a memorial less about death than about a life of accomplishment.

One variation on the demi-figure type was at first seen only in the college chapels of Oxford University: figures with cushions terminating their torsos. Shakespeare’s cushion has sometimes been mistaken for a woolsack, but it was a conventional attribute for men of learning. Cushions were the settings for books, not only as required for the Bible-bearing pulpits of English parish churches, but also as used by university lecturers. At the time of Shakespeare’s death, all the cushioned monuments in England had Oxford connections.

Shakespeare’s biographers have long fretted over the fact that he never attended university. This should not have been surprising at a time when divinity was the subject for most advanced education. But local oral history tells us that during those years that Shakespeare lived and worked in London, he returned home to Stratford at least once a year. It was a three- or four-day trip with Oxford a common stopping place. He is said to have stayed in the house of an Oxford couple who maintained drinking rooms for university folk. This was before there were college common rooms and before colleges were closed off with fences and gates. In early-seventeenth-century Oxford, Shakespeare would have been free to mingle with Oxford’s most distinguished scholars. The Oxford cushion on his monument suggests that he attended sermons in the college chapels where their monuments were mounted. He seems to have been inspired to take the form for himself.

If Shakespeare commissioned his own monument, we see him as he wanted to be seen: in a life portrait, wearing “a black gown like an undergraduate’s at Oxford” (as William Aubrey observed around 1640), holding a quill in one hand, resting another hand on a sheet of paper, and poised to write.

Wedding: how did Shakespeare become a London playwright?