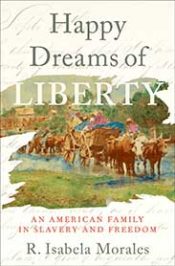 Happy Dreams of Liberty: An American Family in Slavery and Freedom

Wealthy Alabama cotton planter Samuel Townsend invited the attorney to his home in 1853, swearing him to secrecy. His elder brother Edmund had recently died, and the extensive litigation over Edmund’s estate had made it clear to Samuel that he needed an airtight will if he wanted to guarantee that his chosen heirs would inherit his fortune. With an estate worth more than $200,000 dollars in the 1850s, Samuel was the equivalent of a modern multimillionaire. He wanted to leave this estate to his children and his brother’s daughters when he died—an ordinary enough wish. The trouble was this: all of these children were enslaved.

Like countless white men across the antebellum South, the unmarried cotton planter Samuel and his brother Edmund both fathered children with enslaved women they owned on their vast plantations. In his will, Samuel wrote that he wanted his sons and daughters to be treated exactly as though they were “white children,” giving them their freedom and an immense inheritance when he died. That was easier said than done. Because the law of slavery in the United States declared all children of enslaved women to be slaves themselves, Samuel’s five sons, four daughters, and two nieces were legally his property, and property wasn’t supposed to inherit.

The attorney Samuel hired, however, did the nearly impossible, and in 1860—four years and two lawsuits after Samuel’s death in 1856—the old planter’s will was declared valid, making the Townsend children their enslaver’s rightful heirs. Over the following decades, the Townsends would traverse the country, searching for communities where they could exercise their newfound freedom and wealth to the fullest. Through the Civil War, Reconstruction, and the rise of Jim Crow, the Townsends’ money and mixed-race ancestry granted them opportunities unavailable to most other freedpeople. Disbursements from Samuel’s estate allowed the younger Townsends, both boys and girls, to attend Wilberforce University in southern Ohio; after fighting for the Union Army in Mississippi, one son took his inheritance to the Rocky Mountains, where he used it to start a business as a barber and engage in silver mining; other members of the family homesteaded on Kansas’s Great Plains, building new lives as farmers, teachers, journalists, and lawyers. Samuel’s son Thomas Townsend even returned to Alabama and purchased part of the old plantation where his family had been enslaved—the first time one of Samuel’s former slaves would own his former master’s land. Samuel Townsend’s estate was greatly devalued by the Civil War, but the surviving Townsend children would inherit around $5,000 each, more than $130,000 each in today’s currency. Though members of the family often faced prejudice in the communities where they made their homes, this capital gave the formerly enslaved Townsends room to pursue social and economic mobility in a hostile society.

Yet the fact that the Townsends had themselves once been enslaved didn’t make their inheritance any less problematic than if they had indeed been Samuel’s “white children.” The trust fund that the Townsends drew from throughout their lives had been built on enslaved labor—their own, their mothers’, and that of the nearly 200 other African Americans Samuel had held in bondage. When Samuel died and his property was put up for auction, his lawyer wrote that “the lands sold low” while “the negroes sold high,” meaning that most of the money the Townsends inherited came from the sale of other enslaved people, men and women without the dubious privilege of being their master’s children. Though it had radical implications for their future lives, perhaps the Townsends’ inheritance wasn’t all that radical of an act on Samuel’s part. Samuel Townsend hadn’t been motivated to emancipate his children by an abhorrence of slavery; he’d made his fortune on the backs of enslaved people. Samuel simply considered the enslaved Townsends superior to other African Americans, and therefore deserving of freedom, by merit of their blood relationship to him.

When Thomas Townsend purchased a piece of his father’s old plantation, it wasn’t an example of the large-scale land redistribution that freedpeople advocated after the Civil War. It was the transfer of wealth within one elite family, a centuries-old practice with consequences that reverberate into the present day. The descendants of white elites have had generations to build their wealth, in some cases wealth originally derived from slave labor. The descendants of enslaved people, who were largely denied land ownership during Reconstruction and excluded from economic advancement during Jim Crow, have not. It’s a form of opportunity theft that Ta-Nehisi Coates termed “the quiet plunder” in his 2014 article “The Case for Reparations.”

The Townsends’ story pushes us to imagine what America might look like if more enslaved people had benefited from the same sort of generational wealth that Samuel and Edmund’s children did, and that many white Americans still do today. If the promise of “forty acres and a mule” to former slaves had been honored by the federal government. If Thomas Townsend’s purchase of his father’s land in 1860s Alabama hadn’t been the exception, but the rule. Ultimately, the Townsends press us to ask a critical question for the present day: how do we make that imagined America a reality?

R. Isabela Morales is the Editor and Project Manager of the Princeton & Slavery Project and the Digital Projects Manager at the Stoutsburg Sourland African American Museum. She received her PhD in history from Princeton University. She is the author of Happy Dreams of Liberty: An American Family in Slavery and Freedom, available from OUP now.

A life documented: Winkfield, an enslaved man in colonial Virginia