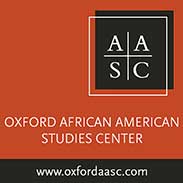 The Oxford African American Studies Center provides students, scholars and librarians with more than 10,000 articles by top scholars in the field. Over 2,500 images, more than 450 primary sources with specially written commentaries, and nearly 200 maps have been collected to enhance this reference content. More than 150 charts and tables offer information on everything from demographics to government and politics to business and labor to education and the arts.

The odds are long against learning much about any individual among the millions of people once enslaved in America. At the University of Virginia, for example, a monument to the enslaved who built and maintained the university from 1817 to 1865 commemorates some 4,000 workers identified in school records. But fewer than a thousand have names, and most of those lack family names. The rest are noted on the monument by their job or relation, “midwife,” “cook,” “laborer,” and so on. More than 3,000 are remembered only by marks or jobs.

At the College of William and Mary in Williamsburg, Virginia, the case is the same.

With one exception: Winkfield.

As part of a new memorial, a team of historians identified some 180 people that the university either owned or hired, or who were associated with the school during its first 172 years. Some have names—Lemon, Adam, Betty, Priscilla—but most are known only by what we call “sightings” in local records: “paid hire a Negro wench 2 years,” “paid Mr Allen hire of a Negro.”

We can recover a few details for some. We know a bit about Joe, for example, from his work assignments, recorded in 1837:

That Joe the College Servant is required to cut four cords of wood weekly during the recess, and that Mr. Pryor the constable be employed to measure such wood and see that this order is fulfilled. Likewise that Joe whitewash and clean the College chambers and Lecture rooms.

And for Lemon, the namesake of the Lemon Project, ­the College’s investigation into its complicity in slavery and segregation, we ­have records of his selling produce, of a Christmas bonus to him in 1808, medicine in 1816, and, finally, a coffin in 1817. He is also evoked in a novel by a former student as “Old Lemon,” helpful in a student’s arrival at the College and in running errands, and much remembered for his oyster suppers.

But about Winkfield we know enough to get a sense of his being, his personality, and his stature at the College and in Williamsburg. And, especially striking, we have what are likely his own words affirming an equality with whites.

We don’t know precisely where or when Winkfield was born, but a notation (big reveal to come) in a 30 November 1775 issue of the Virginia Gazette records that he was “the son of Old Liverpool, the ferryman.” A number of ferries plied the waters near Williamsburg, so likely Winkfield was born locally.

College records describe him as helpful, responsible, and respected from at least 1763 to at least 1780, for some or all of that time in charge of the Great Hall.

The Great Hall was the heart of the College, where meals were served and talks, meetings, and concerts were held. Running that enterprise, especially under the demanding scrutiny of multiple masters and students, was a complex undertaking.

The Bursar’s books and the Faculty minutes reveal that Winkfield earned an elevated stature. In two different lists of the enslaved at the College, in 1779 and 1780, his name is at the top—and the 1779 list is of the enslaved that the College will not sell, even at a time of financial stress.

Even more telling is his apparently receiving a supplementary payment for stepping in during the summer and fall of 1763, seemingly a reward for helping overcome a staffing problem recorded in the Faculty Minutes. One entry notes that Winkfield received a payment, 6 September 1763, of £6: “pd. cook ^in part for wages pd. Winkfield.” A further entry the same month, 23 September 1763, records a second payment: “By Mr. Nicolson, the house keeper by order of the Presidt, paid to Winkie 10 [pounds].”

On 23 July 1763, the housekeeper, Mrs Isabella Cocke, having “behaved much amiss in her Office,” was fired and replaced temporarily by the Steward, James Nicolson, until the appointment of Mrs Garrett, 8 November 1763. Nicholson was “allowed the usual Salary of Housekeeper for his Trouble.” It appears that Winkfield was helpful to Nicholson during a difficult time, especially because of his work at the Great Hall, which gave him some working connection with those in the kitchen beneath.

Several years later Winkfield was twice entrusted to deliver large amounts of cash, virtually a year’s wages, to Samuel Klug, a sub-usher (and then usher) at the College: an 8 December 1766 entry records a payment, £51, cash, “(sent per Winkie).” A similar entry is also for cash, £60: 30 July, “Do. [Cash] Sent him on his note per Winkie.”

Thomas Jefferson, who likely knew Winkfield from his own years at William and Mary (1760–1762), turned to him in October 1772. Jefferson’s brother, Randolph, was quitting the College, and Jefferson records in his papers, “Pd. Winkfeild [sic] at College for R. Jefferson for findg. knives & forks, cleaning shoes &c. 22/6 as per acct. & rect.” (in his fee book Jefferson records the payment to “Winkey at College”).

But the strongest testament to Winkfield’s stature comes when he is directly addressed in that 1775 letter in the Virginia Gazette. The writer, possibly one of the faculty at William and Mary, addresses him with an honorific and attests to his character:

To Mr. WINKFIELD. Superintendent of the hall of William and Mary college. No one, of your colour, has ever established a more respectable character than yourself…. you have ever been distinguished for your spirit and candour. I myself once knew you did possess these excellent qualifications in no small degree.

Though this is the last of Winkfield’s appearances in all known records (and here comes the promised big reveal), we have one last glimpse of him thanks to Samuel Henley. Henley would have known Winkfield well from their daily interactions in the Great Hall; Henley taught at William and Mary from 1770 to 1775 before he returned to England, where he made his mark as an antiquarian.

And in that role, Henley added a note to a 1785 edition of The Merchant of Venice where the Prince of Morocco proclaims, “Bring me the fairest creature northward born, / Where Phoebus’ fire scarce thaws the icicles, / And let us make incision for your love, / To prove whose blood is reddest, his or mine” (II, I, 4-7).

In his note, Henley quotes “a negro slave in Virginia,” clearly a man of “spirit and candour,” in his blunt asservation of equality. It is surely Winkfield who replies to Henley’s interrogation:

to try his acuteness, I had asked, ‘—How it happened that, as Adam and Eve were white, he, their descendant should be black?’— His reply was: ‘I don’t know: but, prick your hand and prick mine, my blood is as red as your’s [sic].’

Terry L. Meyers is Chancellor Professor of English, Emeritus, at The College of William and Mary. Though Meyers’ academic focus was on Victorian Poetry, he began researching William and Mary’s complicity with slavery and segregation over a decade ago. He is pleased to have been instrumental in helping shape the College’s formal investigation of itself—the Lemon Project.