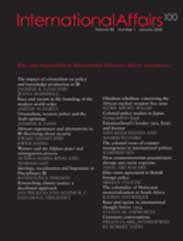 The past quarter of a century has seen a burgeoning scholarship on the disciplinary history of International Relations (IR). By re-examining and revealing how past intellectuals and experts wrote about “the international,” this revisionist work on IR history generates a critical gaze at the assumptions on which IR stands today. Specifically, it has highlighted the imperial, settler-colonial, racist, and gendered origins of the discipline. Consequently, foundations are being laid for IR academics to awake from that “norm against noticing” which has long characterized IR. We are beginning to realize how certain significant traditions, theories, and voices have been erased during the course of its development and are thinking about what this loss means to knowledge production in it.

At the same time, we witness a growing interest in a post-Western IR and a global IR. This trend is largely stimulated by a similar motivation: exploring those issues, concepts, and theories which have been excluded from Eurocentric IR. One of the basic approaches here is to duly acknowledge the agency of non-Western actors and experts. They are not simply the recipients of Western international system and IR, but the independent agents who have actively remolded them.

My analysis of Colonial Policy Studies (CPS) in pre-WWII Japan—in the special issue of International Affairs “Race and imperialism in IR”—not only fits into this academic tide, but also gives a caution to those scholars who engage in a post-Western IR. I show that the important origins of Japanese IR, as much as Western IR, lie in an imperial frontier, colonial rule, and racism. This can serve as a lesson for those seeking an alternative in non-Western IR. At least under the geographical division of West and non-West, non-Western IR may not totally be immune from the same pitfall as Western IR; the de-Westernization of IR may not necessarily lead to de-imperializing and decolonizing it. If we try to square an epistemic partiality, it will be necessary to think carefully about what non-Western means.

As a medium for the racialization of the world

CPS composed an epistemic industry to run the frontiers of the Japanese empire before WWII. It was instrumental in devising, authorizing, and legitimating the Japanese government’s colonial management policies. CPS also played a noteworthy role in pushing the imperial boundaries by promoting transborder migration, settlement in terra nullius or among “savages,” and overseas capital investment. Indeed, many proponents of this study area offered ideologies of settler colonialism for Japanese emigrants across the Pacific Ocean.

CPS formed a transdisciplinary area that straddled various fields, including economics, history, political science, law, and agricultural administration. It was, however, profoundly shaped by the fashionable research of the time in evolutionary biology, eugenics, and race science. CPS thus gave rise to pseudo-scientific ideas about the diversity and heterogeneity of humankind in imperial frontiers. It was this study area that constituted one of the key origins of Japanese IR, which became institutionalized after WWII. Specifically, CPS impacted on the creation of its two subfields: Area Studies and International Political Economy. This stemmed from the fact that CPS dealt with a variety of the world’s colonial regions and multiple transborder socio-economic issues such as capital flows and migration.

Given these features of CPS, it can be regarded as a parallel to early Western IR marked by imperialism and racism. As a collection of historians, including Robert Vitalis, John M. Hobson and Duncan Bell, have shown, the harbingers of Western IR—such as J.A. Hobson, Paul Reinsch, Ludwig Gumplowicz, Alfred Mahan, Halford Mackinder, Lionel Curtis, and Alfred Zimmern, to name only a few—helped racialize the modern world through their Eurocentric international theories. The proponents of CPS were East-Asian counterparts to these spokespersons for early Western IR. Specifically, they were complicit in creating racial hierarchies within non-white populations and embedded such hierarchies in non-Western knowledge. That is the oft-overlooked lacuna behind the bifurcated categories of the color-line (white and non-white).

Analysing the work of Nitobe Inazo (1862-1933) and Yanaihara Tadao (1893-1961) is useful for understanding this process. Nitobe has been famous as the author of Bushido (1899) and as a liberal internationalist committed to the League of Nations as its deputy secretary-general. At the same time, he was a key architect of CPS, holding the chair of colonial policy at the Tokyo Imperial University from 1909 to 1920. When the US ban on Japanese immigrants (the Johnson-Reed Act) was introduced in 1924, he attacked it as white chauvinism. However, such condemnation appears merely opportunistic given his racism against non-white people. Overseeing the Japanese imperial hinterland of Nan’yo (the South Seas), he theorized about multilayered racial hierarchies with the Japanese at the top, “the Malays” and “the blacks” at the bottom, and the Chinese in-between.

Yanaihara Tadao was a successor to Nitobe as the professor of colonial policy at the Tokyo Imperial University. After WWII he was closely engaged in institutionalizing IR, embodying a continuity between pre-war CPS and post-war IR. His theoretical framework for CPS was unique. Called de facto colonization (jisshitsuteki shokumin), it was a variant of settler colonialism, formulating many-sided economic and cultural interplay between transborder migrants and local populace. Some say that as Yanaihara’s colonial theory blurred the boundaries of the domestic and international, it prefigured the concept of a global civil society. However, when applied to Nan’yo, the same theory promoted racial hierarchies that discriminated against indigenous peoples. Based on a phenotypic notion of race, Yanaihara assumed that it was transnational capitals and labour of “civilized” Japanese that would modernize “underdeveloped natives” in the South Pacific. His post-war account of IR was created in the shadow of such a conception of racial stratification. When he gave lectures on IR in 1950, he posited a hierarchic globe—instead of a horizontal sovereign-states system—marked by “the advanced and backward countries.”

To a remarkable degree, early Japanese IR was instrumental in racializing people of colour. This suggests that at least in some cases, non-Western IR may also need critical inspection as has been directed to Western IR in recent years.

Tomohito Baji is an Associate Professor in the History of Political and Social Thought at the Graduate School of Arts and Sciences, the University of Tokyo, Japan.

His article in the January 2022 issue of International Affairs is: 'Colonial policy studies in Japan: racial visions of Nan'yo, or the early creation of a global South.’