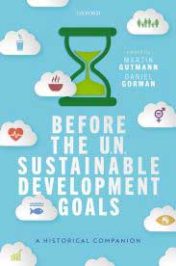 Before the UN Sustainable Development Goals: A Historical Companion

To say that wars cause disruption and hardship is stating the painfully obvious. Regardless of attempts—real or professed—at limiting civilian casualties, military conflict always unleashes suffering on the civilian population. Once again, as in the Balkans in the 90s, in Syria in 2011, and in countless other conflicts before, today in Ukraine civilians are huddling scared in basements or scuttling towards safety in neighboring lands.

Yet the Russian invasion of Ukraine brings another stark truth to the fore: without peace, our efforts at building a sustainable future are predestined to fail. The consequences of such a failure are dire. In March, the Intergovernmental Panel on Climate Change (IPCC) announced in no uncertain terms that we are at a critical juncture and that only with immediate action can we avoid a climate disaster.

The fact is that we have in the last decade taken modest but meaningful steps towards a more sustainable future. This can be seen in our progress on achieving the UN’s 17 Sustainable Development Goals, which were launched in 2015 as a unifying framework for achieving sustainable development.

The Coronavirus pandemic proved a major disruptor to these efforts, however. According to the UN’s own assessment, COVID-19 “led to the first rise in extreme poverty in a generation,” cast between 70 and 161 million people into hunger, and “wiped out twenty years of education gains”—to name but a few of the dire conclusions.

What we need today, as we slowly emerge from the worst of the pandemic, is a redoubling of our efforts at combating the global challenges of sustainable development. Yet the Russian invasion of Ukraine and the increasingly strained geopolitical climate that is following in its wake threatens to derail such efforts.

War obviously takes human lives, destroys vital infrastructure, derails economic activity, and causes a host of other social and economic damage in the region directly affected. History shows us, however, that the disruptive effect of war also runs deeper and far beyond the geographic limits of fighting. In recent decades, historians have documented in painstaking detail how past wars have thrown a monkey wrench in our delicate relationship to nature. Indeed, the mere threat of war—such as during the tensest days of the Cold War—can run roughshod over cultural and political constraints on overexploiting the environment. Such a ripple effect can already be felt today too, as the war in Ukraine is causing food prices to rise precipitously from Berlin to Benin.

The world was obviously not peaceful in the years before the Russian invasion of Ukraine. Many have, rightly, called out the massive Western reaction to the war compared to other conflicts in the Global South as being at best a double standard, at worst racist. Be that as it may, it is exactly this overwhelming reaction that suggests that this war, more than others, will have far-reaching consequences for sustainability.

While the long-term consequences of the Russian invasion of Ukraine for the international system remain to be seen, there is some concern it is the foreboding of a new era of global conflict. This is especially so, if we read it in parallel with China’s increasing assertiveness and disengagement from the West. Whether predominantly cold or hot, such a systemic change would have a triple negative effect on sustainability efforts.

For one, it would stunt political will and sideline the climate crisis from the headlines, as Europe, the US, and other regions redirect needed human and financial resources to rearmament (already today, such commitments can be heard from the halls of Berlin and other capitols). Second, and equally destructive, a new Cold War would at best clog, and at worst sever the multilayered international connections that are fundamental to mounting a coordinated effort at addressing the global drivers of climate change and inequality. Finally, just as during the Cold War, financial and technological support to emerging economies may become contingent on ideological alignment rather than a commitment to the environment or citizens.

Since their inception in 2015, the Sustainable Development Goals have been seen as intimately interlinked—the logic being that progress on, say, building sustainable cities (SDG 11) is contingent on responsible consumption and production (SDG 12), and so on. In a new book on the SDGs, Christine Smith-Simonsen writes of SDG 16 (Peace, Justice and Strong Institutions) that “it can be argued that the achievement of this one goal [peace] is a precondition for the success of the others.” Three months ago, Smith-Simonsen’s claim would have seemed exaggerated. Today, faced with a new reality, who would disagree.

Martin Gutmann is a historian at the Lucerne School of Business, Switzerland.

Dan Gorman is a historian at the University of Waterloo.

They are the co-editors of 'Before the UN Sustainable Development Goals: A Historical Companion'.