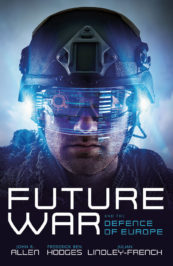 Future War and the Defence of Europe

We face a critical challenge: unless Europeans do far more for their own defence, Americans will be unable to defend them; but there can be no credible future defence of Europe without America!

The COVID-19 pandemic has accelerated the shift of power from West to East, revealing a host of vulnerabilities in Europe’s defences and making major war in Europe again a possibility. The lessons of history? From D-Day to the creation and development of NATO, the importance of sufficient and legitimate military power has been at the heart of credible defence and deterrence, whilst shared innovation and technology have been critical to maintaining the unity of effort and purpose vital to upholding Europe’s freedoms.

However, Europeans now face a digital Dreadnought moment when strategy, capability, and technology could combine to create a decisive breakthrough in the technology and character of warfare—and not in Europe’s favour. The future of peace in Europe could well depend on the ability of Europeans and Americans to mount a credible defence and deterrence across a mosaic of hybrid war, cyber war, and hyper war. To remain credible, deterrence must thus reach across the conventional, digital, and nuclear spectrums. If not, Europe will remain vulnerable to digital decapitation and the imposed use of disruptive technologies.

Critically, if the defence of Europe is to remain sound, both Europeans and their North American allies must squarely and honestly face the twin threat of hostile geopolitics and disruptive technologies, and they must do so together and with shared purpose:

“Could Europe alone defend Europe? No, and not for a long time to come.”

Can NATO defend Europe? Only if the Alliance is transformed; for if it fails, any ensuing war could rapidly descend into a war unlike any other. Europe must understand that if America is to provide the reinsurance for European defence, it is Europe who must provide the insurance. NATO is thus in the insurance business. It is also an essentially European institution that can only fulfil its defensive mission if Europe gives the Alliance the means and tools to maintain a minimum but credible deterrent.

Could Europe alone defend Europe? No, and not for a long time to come. Given post-COVID-19 economic pressures, the only way a truly European defence could be realized would be via an integrated EU-led European defence and a radical European strategic public–private sector partnership formed to properly harness the civ-tech revolution across Artificial Intelligence (AI), super-computing, hypersonic, and other technologies entering the battlespace. Can Europeans defence-innovate? They will need to.

Europe must quit the comforting analogue of past US dependency and help create a digital and AI-enabled defence built on a new, more equitable, and more flexible transatlantic super-partnership. A super-partnership that is fashioned on the anvil of an information-led digital future defence against the stuff of future warfare: disinformation, destabilisation, disruption, deception, and destruction. A partnership which at its defence-strategic core has a new European future force able to operate to effect across air, sea, land, cyber, space, information, and knowledge.

The future of European defence is not just a military endeavour. COVID-19 has changed profoundly the challenge of defending Europe. It has also changed the assumptions upon which the transatlantic relationship has rested since 1945 and changed the relationship between the civil and military sectors—and even between peace and war. Therefore, Europe’s future defence will depend on a new dual-track strategy: the constant pursuit of dialogue between allies and adversaries together with a minimum but critical level of advanced military capability and capacity. Only a radical strategic public-private sector partnership that leverages emerging and disruptive technologies across the mega-trends of defence-strategic change will the democracies be able to defend themselves.

If not, then as Plato once reportedly said, “Only the dead have seen the end of war.”

John R. Allen is President of the Brookings Institution. He was previously Commander of the NATO International Security Assistance Force and U.S. Forces in Afghanistan from 2011 to 2013, and is the recipient of numerous US and foreign awards.

Frederick Ben Hodges holds the Pershing Chair in Strategic Studies at the Center for European Policy Analysis. He was previously Commander of the United States Army Europe from 2014 to 2017.

Julian Lindley-French is a Senior Fellow at the Institute of Statecraft. He is also founder and chair of The Alphen Group, a high-level strategic 'do-tank'. His publications and high-level reports combine policy experience and academic expertise, and include A Chronology of European Security and Defence (OUP, 2008) and The Oxford Handbook of War (edited with Y Boyer, OUP, 2014).