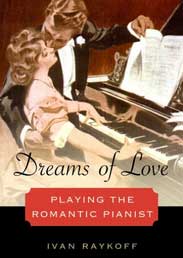 In Jane Campion’s 1993 film The Piano, a crated Broadwood grand sits abandoned on a remote and desolate beach, then later it gets carried through the muddy overgrown New Zealand jungle to a settler’s home. In Campion’s new film, The Power of the Dog, a Mason & Hamlin grand is carried by ranchers into the Burbank house in remote Montana so that Mrs Burbank can play it when the Governor comes for dinner. “No, it’s too good for me,” Rose modestly protests when the fancy instrument arrives. “I’m just very average, I only know tunes.”

In both films the grand piano serves as more than the emblematic instrument of feminine domestic music-making and of European bourgeois culture transported to the hinterlands of the nation or empire; it also functions as a gender technology because it regulates the metaphorical sound-body of the woman who plays it. As composer Michael Nyman explains about how his music for The Piano represents the character of Ada (Holly Hunter), “The sound of the piano becomes her character, her mood, her expressions, her unspoken dialogue, her body language.” Self-willed and temperamental, Ada is depicted as a “forte” woman whose passionate playing threatens her marriage and the patriarchal social order around her.

Rose (Kirsten Dunst) in The Power of the Dog, in contrast, is a meek and dutiful “piano” woman who tries to play gracefully within the constraints of society, marriage, and motherhood. As explained in Dreams of Love, “The piano woman’s playing is often overseen by a figure of patriarchal authority who represents the regulation and containment of her sound-body” (186). Rose’s nemesis in this story is her brother-in-law Phil (Benedict Cumberbatch), a talented but cruel and manipulative rancher who humiliates her and effectively silences her playing. When she hesitantly practices Strauss’s “Radetzky” March, which she played for silent picture shows before she got married, Phil maliciously mimics her efforts on his banjo from his room upstairs. Dunst explains that she held ice cubes in her hands before filming the dinner party scene so her fingers would be stiff and shaky with a trembling nervousness. Petrified by anxiety, Rose barely plays two notes before quickly pulling her hands off the keys. “I’m so sorry,” she apologizes to her disappointed guests, “I can’t seem to play.”

“The grand piano serves as more than the emblematic instrument of feminine domestic music-making and of European bourgeois culture… it also functions as a gender technology because it regulates the metaphorical sound-body of the woman who plays it.”

This moment in the film doesn’t seem to cohere with the backstory. Rose admits that she had once “played in the cinema pit for hours and hours,” a job which would involve improvising to whatever might be happening on the screen for an extended length of time, but now she can’t bring herself to play something, or even fake it, for a minute or two at this dinner in her home?

Campion’s film adheres to the original novel by Thomas Savage, first published in 1967, but the screenplay diverges from the novel in this scene. In the novel, Rose admits to her guests that “I’m terribly out of practice,” but she does play an entire piece, even if it is with an anxious detachment. “Somehow she got through an easy Strauss waltz, not daring to do more than play it mechanically as a child might repeats ABC’s, mindlessly” (154). When she next tries to play her husband’s favorite piece, however, she just freezes up, “appalled that her fingers had no feeling whatsoever, no knowledge. She folded her hands in her lap, and looked at them. … ‘I’m sorry,’ she said, ‘but I can’t remember it.’” There is a more complicated psychological dynamic at work here in the novel as Rose is torn between her love for her husband and her fear of her brother-in-law, who has deliberately skipped the dinner gathering. “It hadn’t been stage fright at all. Playing before a governor no more exposed oneself to criticism than playing before an audience in the pit of a motion picture palace or for a group of diners. Would he think it queer than she had simply been paralyzed by the eating utensils of someone not present?” (156)

While this portrayal of Rose conforms to established cinematic tropes around the “piano” woman who is self-deprecating about her talents and whose playing is constrained by patriarchy, these notions are also evident in real-life discussions about the film scene and the acting involved. In one interview, Dunst describes how she took lessons from piano coach Jeff Kite and practiced the Strauss march for this scene insistently, though her regimen was rather disruptive to domestic tranquility. “So that was really annoying in our household,” Dunst relates, “our friends hearing the same piece of music over and over every night.” Even her real-life husband (Jessie Plemons) found it somewhat tiresome, Dunst admits. “Every time after I’d put the kid to bed, I’d just work on the piano, work on the piano—they were so sick of these pieces.” In another interview, Dunst notes that she had to learn to “play piano badly” for the film, and her description of the dynamics of the playing scene in the film mirrors her practicing at home: “I think whatever’s happening in the house is really making her feel so insecure about even, like, working on her stuff.” Her NPR interviewer Terri Gross even recalls her own similar experience: “I was just, like, your average kid who took piano lessons and didn’t play very well. But I did sometimes have to play in front of the auditorium. … I’d get so nervous and so uncomfortable and always feel like I was going to blow it.”

In one scene in Campion’s The Piano, the weather-beaten Broadwood grand gets tuned after its arduous journey through the jungle, and Ada and her daughter are surprised to hear its newly harmonious scales. The “temperament” of a female pianist character can be represented sonically in a film by the strains of an (un)tuned piano, with those consonances or dissonances and the “regulation” of the instrument conveying her sound-body identity. Jonny Greenwood’s soundtrack score for The Power of the Dog includes a track titled “Paper Flowers” that utilizes an out-of-tune mechanical piano. The dissonant clanging timbres of this detuned pianola evoke the psychological condition of Rose’s character, as Greenwood explains: “Not only is her story wrapped up in the instrument, but it was also a good texture for her gradual mental unraveling.” The perpetual “piano woman” trope lives on in Campion’s most recent film both musically and visually, helping viewers understand this character and her condition even when she can’t play.

Ivan Raykoff is author of Dreams of Love: Playing the Romantic Pianist, and Associate Professor of Music in the interdisciplinary arts program at Eugene Lang College, The New School for Liberal Arts in New York.